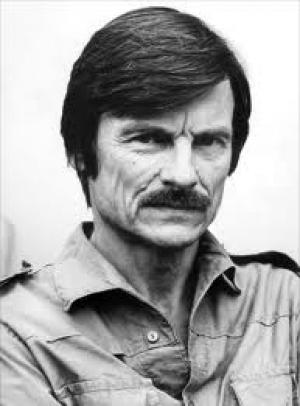 "Unlike all the other art forms, film is able to seize and render the passage of time, to stop it, almost to possess it in infinity. I'd say that film is the sculpting of time."
~ Andrei Tarkovsky

Born appropriately enough the son of a poet and an actress in Belarus, Tarkovsky became the most important Soviet director of modern times, and a case could be made that he may even have eclipsed Eisenstein as their most significant cinematic artist. His remarkable reputation rests on a handful of films, but like the great master Robert Bresson, whose work Tarkovsky admired, it's quality rather than quantity that allows him to reside in the first rank of cinéma de l'auteur. Tarkovsky worked within the rigid confines of the repressive Soviet State arts programs, and had to negotiate bureaucratic restrictions at every turn that were even more onerous than the commercial considerations film artists had to cope with in the west. His first feature was a project he inherited, a 'traditional' war film study Ivan's Childhood, but it captures enough of the influence of the Italian neo-realists to retain interest and after that his cinema is single-mindedly his own vision.

Tarkovsky's international reputation was enhanced in a huge way by his second feature, Andrei Rublev an epic meditation on man's place in an overwhelming natural landscape. Unafraid to ask the big philosophical questions, Tarkovsky took his examinations into space with Solaris, an elliptical and probing existentialist essay on what constitutes 'humanity', a theme that infuses all of his later work. The Mirror poetically examines his own feelings on his childhood and Stalker , (like Solaris) re-wrote the rule book on how science fiction can look in a post Kubrick universe. Tarkovsky's reflective dialectic, his inability to provide linear explanations led to many problems with an autocratic State system, and eventually he sought support outside the Soviet union to continue making his masterpieces. His final film,  The Sacrifice saw him pair up with Ingmar Bergman's go-to cinematographer Sven Nykvist,  a symbolic coupling if ever there was one given Tarkovsky's debt to Bergman as a filmmaker able to articulate the big philosophical questions. A career that defied the odds, Tarkovsky's challenging of the artistic limits of cinema continues to resonate in the works of Haneke and Malick to mention a couple, and his body of work stands as a beacon for artists everywhere.