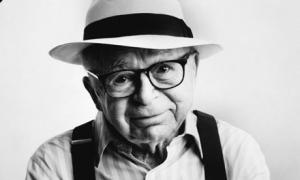 "I'm a writer, but then nobody's perfect"

"A director must be a policeman, a midwife, a psychoanalyst, a sycophant and a bastard" ~ Billy Wilder

A Polish born Viennese Jew who fled Hitler in 1933 first for Paris and then to Hollywood, Wilder had first made a name for himself in Germany as a writer, and it's a measure of how he saw himself that engraved on his tombstone are the words "I'm a writer, nobody's perfect". He worked a string of writing jobs in Hollywood, claiming that he told a border checkpoint guard in Mexico that he was going to Los Angeles to write films, "Write some good ones" was the reply as he was checked through. Even though his scripts were directed by his idol Ernst Lubitsch and by Preston Sturges, he eventually grew tired of seeing his scripts not handled to his liking so he rode the early '40's vogue of writers becoming writer-director's and started directing and producing his own scripts - he never looked back. Like Howard Hawks he always worked with talented writers, teaming up for the early Hollywood films with Charles Brackett, a mild mannered conservative contrast to Wilder's hyped up aggression and chutzpah, and I. A. L Diamond, who co-authored most of Wilder's later period classics. In 1938 Wilder and Brackett formed a writing partnership that lasted 14 years, and Wilder got permission in 1941 from Hawks to watch him direct the Brackett-Wilder property Ball Of Fire, which Hawks turned into a screwball masterpiece.

Having learnt from the best, Wilder's visual style was always unfussy and direct, always at the service of the script and the story, he is quoted as saying "The best director is the one you don't see" even though he worshipped Ernst Lubitsch, famous for the Lubitsch Touch. A workaholic who worked and re-worked scripts for months, Wilder almost never turned a frame without having a brilliant shooting script. He was also easily bored, so he kept changing genres when other directors stayed to proven formulas. In his first decade as a director he defined a genre with his film noir Double Indemnity, showed Hollywood how to do 'social conscience' with his Best Picture winner The Lost Weekend (his fourth film as director) and stunned post war audiences with the breadth of his cynicism towards his adopted home with Ace In The Hole. In amongst those heavy dramas he inserted a feather-light, quasi-Viennese operetta with Bing Crosby and a dark satire on Hollywood itself with the immortal Sunset Boulevard.

Wilder was always able to see his adopted America with a clear and unbiased eye, and it was not always the one America saw of itself, so Wilder was able to couch many of his morality fables in comedies to wash down his cynicism with some laughter, best seen in his remarkable The Apartment from 1960. Wit and insight abound in his well paced scripts and his affinity with actors was such he coaxed many award wining performances from his stars, memorably with William Holden and also with his favourite actor Jack Lemmon, whose verve and panache totally suited Wilder's style. Occasionally Wilder's boldness ran ahead of conservative, mainstream audiences, and Wilder always judged his films by the classic Hollywood measure, whether it made money or not, but some films that were out kilter with the times and audiences are now regarded as classics, like Ace In The Hole, or in the case of Kiss Me Stupid, a flawed masterpiece.

"Shoot a few scenes out of focus. I want to win the foreign film award." ~ Billy Wilder

Billy Wilder was a literate aesthete with a taste for fine art and a collection second to none, luckily he also had a penchant for jazz and sports that let him fit easily in the America he adopted as his home. Apolitical as a matter of indifference he nevertheless made a stand at a Director's Guild meeting where the likes of right wing conservative Cecil B. DeMille were demanding all directors take a loyalty oath during the McCarthy Witch-hunt period, Wilder showed his distaste by voting against it, having made the mistake in Germany of not taking Hitler seriously until it was too late. A deeply intelligent iconoclast, Wilder will be remembered as a brilliant writer, wonderful director and a noted wit. An example of Wilder's wit can be found when he was asked to talk about Austria, where he grew up, he said "The Austrian's are geniuses, they convinced the world that Mozart was an Austrian and Hitler was a German".