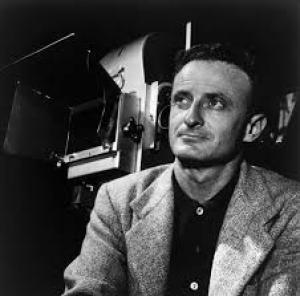 Just another European genius in Hollywood!

'I like people to be entertained, but I don't want it to be empty. I like to give some nourishment.'
~ Fred Zinnemann

Born in Poland in 1907 and raised in Vienna to Jewish parents, like his good friend Billy Wilder, Zinnemann was drawn to cinema at a young age and studied in Paris to become a cinematographer. He worked with Wilder and Robert Siodmak on People on Sunday in Berlin in 1929 and then moved to Hollywood just as the stock market crashed and The Great Depression began. Zinnemann co-directed a politically left leaning semi-documentary in Mexico in 1935, called The Wave, before he worked on short films for MGM for the remainder of the decade. He got his chance to direct a couple of effective B films in the early 1940s, with Kid Glove Killer and Eyes In The Night, with Edward Arnold and a young Donna reed.

In 1944 he was given an A-film, The Seventh Cross, starring Spencer Tracy and demonstrated he had learned his trade well and was a talent to be taken seriously. He got a reality check of how Hollywood works, when after starting Judy Garland’s first drama feature, The Clock, she had him fired and replaced with Vincente Minelli, her secret boyfriend. He worked on a couple of undistinguished projects before an opportunity to make the kind of films he favoured came along with The Search, starring Montgomery Clift, a drama set in Post-War Europe involving reuniting displaced children with their parents. The scenario had massive personal overtones for Zinnemann as he lost both his parents in The Holocaust and his sensitive realisation of the story garnered his first Oscar nomination for Best Director.

Zinnemann proved he was a match for his fellow European émigré’s in the genre of Film Noir with a superb entry starring Van Heflin and Robert Ryan, Act of Violence, before he handled Marlon Brando’s screen debut in 1950, The Men, a full force examination of the effect of WWII on the men who served. The Men was his first non-MGM effort, produced by two army veteran buddies, Stanley Kramer and Carl Foreman, who also wrote the script. He went back to MGM for Teresa, a Pier Angeli vehicle, before Kramer tapped him again for the Foreman written High Noon, with Gary Cooper and Grace Kelly in 1952. Foreman wrote the script as an allegory of the HUAC hearings and resultant Blacklist, and as he’d been a member of the Communist Party, he was called up during the production of the film. Kramer immediately dissolved their partnership, Foreman went into exile and High Noon became a huge hit, solidifying Zinnemann’s reputation as a great director.

Zinnemann entered the mature phase of his career, able to select appropriate projects and not be bound by studio assigned second rate fluff. He stayed with Kramer for his next film, the southern melodrama/Film Noir, The Member of The Wedding and then went to Columbia for the film that would be the biggest success of his career, From Here To Eternity. The adaptation of the James Jones hit novel, starring Burt Lancaster, Deborah Kerr and Montgomery Clift, cleaned up at the Oscars, winning Best Picture and Best Director for Zinnemann. It also won Best Supporting Oscars for Frank Sinatra and for Zinneman’s Eyes In The Night star from his 1942 film, Donna Reed. He helmed the big budget musical, Oklahoma! which was another big hit, before he changed pace with the sombre A Hatful of Rain, a mature depiction of urban drug addiction.

Zinnemann was involved with his old friend Spencer Tracy’s efforts on Hemingway’s The Old Man and The Sea, before he left the project in favour of John Sturges, and his next film was The Nun’s Story, with Audrey Hepburn and Peter Finch. He saw out the 1950s with The Sundowners, where he reunited with Deborah Kerr and threw in Robert Mitchum as Australian Outback sheep farmers. It would be 4 years before his next film, which he co-produced with the star, Gregory Peck, Behold a Pale Horse. The story was an adaptation of an Emeric Pressburger novel, Killing a Mouse on Sunday, but the Spanish Civil War inspired story failed to do well at the box office. Zinnemann redeemed his reputation with the 1966 masterpiece, A Man For All Seasons, adapted by Robert Bolt from his own play and featuring an all-star ensemble headed by Paul Scofield. The film won Best Picture and another Best Director Oscar for Zinnemann. He ended the 1960s locked in a dispute over a film that would never be made, Man’s Fate and the legal problems surrounding it meant it would be 7 years before he delivered his next film. In 1973 he came back with another massive commercial hit, the political thriller The Day of The Jackal, starring Edward Fox. He made the prestigious Julia, a fine drama starring Vanessa Redgrave and Jane Fonda and made his final film in 1982 with Sean Connery, the competent thriller Five Days One Summer.

Fred Zinnemann died at the age of 89 in 1997 and will forever be remembered as one of the finest, most intelligent of Hollywood’s Golden Age directors. He learned every aspect of his craft and his films sparkle with clear narrative lines, wonderful performances, great pacing and lighting and attention to detail. He thrived in an era when an educated, literate man could work in a strict studio-controlled environment and rise to a position where he clawed back some control over the key artistic choices that go into making a feature film. He stood proudly in a tradition of smart, hard working European Jews who fled the old world to carve a new world for themselves in the dream factory, and in doing so left a legacy for the ages.