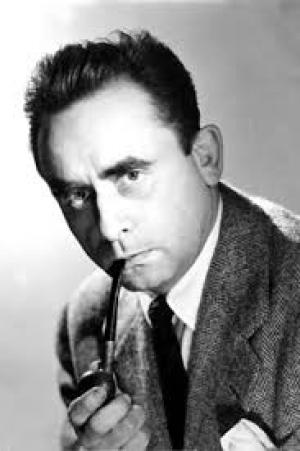 One of the giants of pre-Nouvelle Vague French cinema who fell foul of the blessed imprimatur of the Cahier du cinéma  critics, Henri-Georges Clouzot made a handful of brilliant films that will be remembered long after the work of some of the New Wave filmmakers is no more than a footnote. Clouzot’s timing and tastes seem to cast him as the perennial outsider, firstly with the tail end of poetic realism, with which he shared little in common, and secondly with the mainstream post war classicists, and lastly with the darlings of the New Wave, who lumped Clouzot in with the moribund Tradition of Quality, they despised, the so-called cinema du papa.

Clouzot started in the industry in the early 1930’s as a scriptwriter translating German films into French, and rotating his time between the two countries. After working for UFA in Germany he fell ill and spent 4 years in a sanatorium suffering from tuberculosis. He returned to the industry shortly before the war, his talent championed by A-List actor Pierre Fresnay, and Clouzot duly wrote Fresnay’s only directing effort Le Duel,  as well as writing two plays for the popular actor.

After the fall of France in 1940 Clouzot, like many others, embarked upon a collaboration of a different kind, taking up a job with the Nazi run Continental Films, a company run by Dr Alfred Grevin that controlled the content and output of French film during the occupation. Initially working as a scriptwriter, a string of successes enabled Clouzot to move into the director’s chair with L’assassin habite au 21.  The film was the perfect Continental product, fast paced, slick and entertaining, fulfilling Grevin’s dictum of replicating Hollywood gloss for French audiences to replace the banned allied films.

Grevin fell victim to Clouzot’s ambition and insistence by allowing him enough scope to direct the scandalous Le Corbeau,  a film so misunderstood and quixotic it quickly put everyone off side from the far right to the far left! Clouzot was fired from Continental but after the war he was tried for collaboration and banned from the film industry for life. Only after the intervention of Jean Cocteau, Jean-Paul Satre, Marcel Carné and Rene Clair et al was the ban reduced to two years and Cluzot allowed to make films again.

Clouzot produced two popular French hits with Quai des Orfèvres  and Manon,  both with areas of edge and unease within more mainstream frameworks, before heading for the even darker terrain of The Wages of Fear  and Les Diaboliques,  films that would break through to world acclaim. Clouzot directed a documentary about his friend Pablo Picasso before stumbling with his first flop, Les Espions,  in the late ‘50’s. Clouzot was then paired with Brigette Bardot for what should have been a sure fire commercial proposition with La Vérité,  which did great business and was nominated for Best Foreign film at the Oscars. The film did well with everyone except the trendy Nouvelle Vague clique, and Clouzot took their rejection to heart.

Clouzot’s health became problematic, the death of his wife Véra complicated his ability to work as he attempted to compete with the likes of Truffaut and Godard, but increasingly he felt insecure and irrelevant. His health concerns led to him abandoning the remarkable L’Enfer,  and he managed to finish one last film in 1969. Ironically one of the dreaded Cahier critics, Claude Chabrol, took Clouzot’s script for L’Enfer  and produced a fine thriller, and it would seem history will be kinder to Clouzot’s legacy than he might have hoped for after his death in 1977.

Clouzot, like John Ford was a controlling, driven and volatile individual, albeit one with a painter’s eye, and like Hitchcock he also had a watchmaker’s sense of order and structure. Clouzot’s cinema visited the dark side of humanity certainly, but also affirmed that there is worth in the searching heart of humans under pressure, of humans who still strive to be better.