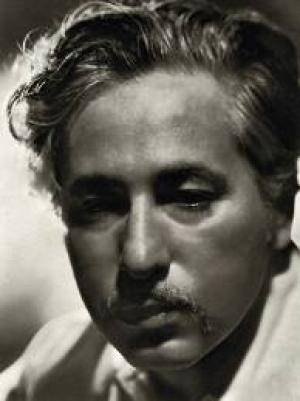 The Devil is a director

"Shadow conceals—light reveals. To know what to reveal and what to conceal, and in what degrees to do this, is all there is to art....  There are some things which cannot be learned, though they can be studied. Among them are the laws of art—and the lawlessness of it, as well." ~ Josef Von Sternberg

Born in Vienna as Jonas Sternberg, he grew up in America and worked as a teen in New York where he learned photography, he later created the character of Josef Von Sternberg the autocratic and brilliant Hollywood director and played it to the hilt. After a string of silent film successes, including the Noir influencing gangster film Underworld, and the decidedly expressionistic Docks of New York, Sternberg hit his stride after he found his muse in Berlin, where he'd gone to make Der Blaue Engle, her name was Marlene Dietrich. The pair made seven films together in the next 6 years, all incredible visual feasts, and a couple at least true masterpieces of the cinema in Morocco and Shanghai Express.

After Dietrich understandably started to branch out and work with other directors Sternberg struggled to fulfil his artistic vision to the levels he'd achieved in partnership with the actress, and his prickly and overbearing, borderline misanthrope personality added a further complication to the equation. So notorious was his method of working and his disregard for people in general that William Powell had it written into his contract that he could not be made to work with Sternberg again after he made two films with him. The Hollywood system made it next to impossible for an iconoclast like Sternberg to operate, let alone flourish in, and the fact that he made so many brilliant individualistic masterwork's within the system is something of a miracle, Dietrich's stardom the thing that gave him clout for a short time.

Sternberg re-imagined the possibilities of cinema, reaching for a symbiosis of feeling and understanding in a visual representation that words can only hint at, the space that music can fill, and carved out a venerable and singular place for himself in doing so. Very few directors were able to 'excite' a visual space so stylishly as Sternberg, usually is service of a remarkable framing of Dietrich's beauty, but always in service of a complete 'auteur' vision, indeed Sternberg was an 'auteur' years before those who would coin the phrase were even born. Sternberg said of his own style, "I don't value the fetish for authenticity, on the contrary, the illusion of reality is what I look for, not reality itself".  Despite his penchant for presenting himself as a faux European aristocrat, Sternberg will remain a visionary and a true American original.