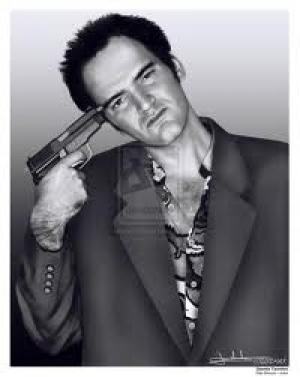 The enfant terribles of modern cinema, retro-film obsessed to a fault, and to a level that made the generation of Scorsese and Spielberg's nerdy film geekdom look positively like dilettantes. The responsibility for this may lie squarely at the feet of the video tape phenomenon of the 1980's, where a fan like Tarantino ( a video shop employee) suddenly found easy access to films that were previously only available to a limited few. Despite Tarantino's ability to artistically level out a Godard classic with an Australian exploitation flick or an Asian chop-socky blood fest, he was still able to show the way to a post post-modernist cinema, dismantling any preconceptions of what was possible with the art form and almost single-handedly creating a new cinema du visceral in the process.

Tarantino gushed onto the scene in the early 1990's, with a low budget gem in 'Reservoir Dogs', with money enough at least for a stellar ensemble cats, courtesy of legendary indie film figure Monte Hellman who co-produced.. Tarantino saved money on sets by featuring most of the action in a deserted warehouse, and wisely focussed on the psychological tension of betrayal amongst a group of criminals. He set new limits of what a script could accommodate in having his characters indulge in throwaway and inane conversations in between rounds of extreme and bloody violence. Tarantino confirmed his reputation with the multi storied 'Pulp Fiction', continuing his filmic tropes and splashing them across a violent canvas with Altman like threads. It's massive success saw him established as a force to be reckoned with commercially, and set him up for carte blanche in relation to any project he fancied.

Staying in the criminal milieu Tarantino made the slightly more mature 'Jackie Brown', in 1997, featuring queen of the 'blaxploitation' films of the 1970's Pam Grier, in an adaptation of an Elmore Leonard novel.  Tarantino then spent six years producing 'Kill Bill', his homage to Asian martial arts films, only to have to release it in two parts due to it's non-commercial 4 hour running time. Tarantino retreated into the fan-boy world of grindhouse slasher double features with his drive-in spoof 'Death Proof' before returning to large-scale work with the brilliant WWII Jewish revenge fantasy, 'Inglorious Basterds'. Tarantino again stuck to the revenge motif with the wonderful, but slightly long, 'Django Unchained' in 2012.

Tarantino has made himself a by-word for the idea of a modern film director, in the same way Hitchcock or Kubrick managed to do, in that he transcends the limits of the label. He forged his own style, by force of will, by love for the form and for balls out risk taking in the face of Hollywood corporate indifference, in much the same way Kurt Cobain and his band re-energised the music scene in the early '90's. The Wienstein brothers took a risk on translating his indie aesthetic to a wider public and it paid huge dividends, forcing Hollywood to re-think the limits of exactly what the public would embrace. Tarantino remains a misfit in the big money corporate pile, and there's no reason to think he'll ever change.