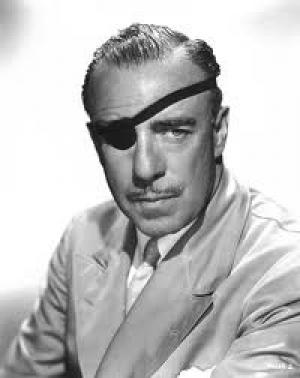 "The transition from silents to sound pictures didn't hit me in any way. I just kept the thing moving regardless of the sound...Of course, there was a great upheaval amongst the directors when talking pictures came in. They called me a renegade because I was one of the first ones to do an outdoor talking picture" . – Raoul Walsh

An auteur leaves an indelible mark of themselves in the films they direct, and Walsh certainly rated as an auteur, although he would have bristled at the intellectual notion. Like great musicians do, he could infuse his ‘playing’ with his personality to create something identifiable, something individual. Walsh was a direct and warm human being, not prone to overt sentimentality, his films are direct and warm and not prone to overt sentimentality. Walsh was an organised and disciplined man, his films are organised and disciplined. Raoul Walsh also made 140 feature films in 51 years!

New York born Walsh was there at the start of the modern motion picture, when David Wark Griffith was inventing, or at least coalescing, much of the language of what we now recognise in feature films in the first blockbuster, Birth of a Nation.  Walsh assisted Griffith and played John Wilkes Booth into the bargain! Walsh immediately graduated to directing his own features and even convinced Mexican revolutionary Pancho Villa to play himself if a feature documentary. Walsh directed    several silent era smash hits, including The Thief of Bagdad  with Douglas Fairbanks and Sadie Thompson,  which he also co-starred in with screen icon Gloria Swanson.

After an accident that caused him to lose an eye in 1927 he concentrated solely on directing, but by the early ‘30’s he went through a fallow period of undistinguished work. Warner Brothers signed him to a long term contract in 1939 and Walsh completely resurrected his career and set about directing a series of muscular and energetic films that were huge successes. Pairing up with Warner stalwarts like Cagney, Raft and Robinson, Walsh etched classic features such as The Roaring Twenties,  They Drive by Night  and Manpower,  and with High Sierra  he propelled Bogart into A-list stardom.

Walsh further added to his reputation as an efficient and reliable craftsman by keeping wild man Errol Flynn under control and making seven films with the hedonistic Australian actor, including the classics They Died With Their Boots On  and Objective,Burma!   Flynn respected Walsh, a director he personally asked for after he fell out with Michael Curtiz, and was on his best behaviour while working on a Walsh set. Walsh finished off his tenure at Warners with the film many consider his masterpiece, White Heat  with Jimmy Cagney, before becoming a freelance director dividing up his time amongst the likes of Universal and RKO.

Raoul Walsh had another productive relationship in his late career with Clark Gable, completing three fine films with the legendary actor, two of them for Warners, and worked on successful features with a variety of stars like Rock Hudson and Gregory Peck before he faded from view after 1964. Walsh completed 140 features, some 86 of them in the silent era, across almost every genre imaginable, and unlike a lot of his peers he was a well respected and much admired human being. A Hollywood original and a Hollywood giant.

Walsh was a no-nonsense, direct kind of man’s man, not given to introspection and considerations of his work as ‘art’, for him it was a job and one he worked hard to master. The French critics of the ‘50’s certainly admired him, even if he was not elevated to the status of saint like Ray and Hawks, and their attempts to intellectualise his films met with Ford like scorn. When they asked him to name the three most important elements in film he replied, “action, action and action’. Walsh never won an Academy Award, doubly ironic seeing he was one of the founding members of that institution in the late 1920's. Regardless, as long as the silver screen flickers Walsh will be remembered and respected, long after other, more highly touted auteurs  are merely dull, half forgotten memories.