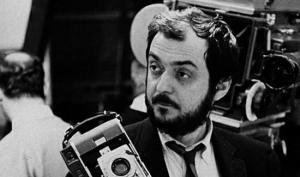 “Anyone who has ever been privileged to direct a film also knows that, although it can be like trying to write War and Peace  in a bumper car at an amusement park, when you finally get it right, there are not many joys in life that can equal the feeling.”
~  Stanley Kubrick

A photographer and chess player who parleyed both of those passions into the infinite grown up game of running a movie shoot. Born in New  York he started out with a low budget Film Noir, Killer's Kiss,  and that got him notice and slightly more money to make The Killing,  a stylish, fatalistic crime Film Noir. Kubrick worked hard to develop Paths of Glory  into a success d'estime  and that led to his star Kirk Douglas asking him to take over Universal's epic Spartacus  from Anthony Mann. Never one to play the Hollywood game or to seek the limelight, Kubrick relocated to England after his big budget Hollywood success with Spartacus and never went back.

Unhappy with the lack of total control Hollywood allowed, given Kubrick even liked to operate his own camera, in England Kubrick negotiated final cut with all his features from then on, even getting involved with their marketing campaigns for each region, and monitoring the colour grades of prints sent out. Some critics seem to criticise the man rather than the product however and each of his new releases became something of an event, Kubrick proved as canny a self-mythologiser and promoter as Hitchcock, whether by accident or design, I'm not sure.  Kubrick came to be a byword for quality, but his reputation as a renowned control freak seems to whet the tabloid appetite for 'whacky Stanley' headlines that took something away from his work, much to his chagrin.

The propensity for 'Hollywood' to play up Kubrick's so-called eccentricities to garner cheap headlines was further reason for the director to retreat from the limelight. Reclusive to the point of hermetic Kubrick was totally immersed in his work and his legacy is simply rich and stunning, roaming across several genres and 5 decades. Kubrick made definitive crime films, war films, horror films, sci-fi films and some that were simply unclassifiable, as in the case of A Clockwork Orange.  Kubrick never shied away from the intellectual dimension in his work, and often he was able to elevate his material to the level of Bergman or Antonioni in respect to its existential implications. Kubrick spoke beautifully of his own existential belief in an interview with Playboy in 1968, and in one passage in particular he conjures up a concise and inspired definition of the existentialist.

"The very meaninglessness of life forces man to create his own meaning. Children, of course, begin life with an untarnished sense of wonder, a capacity to experience total joy at something as simple as the greenness of a leaf; but as they grow older, the awareness of death and decay begins to impinge on their consciousness and subtly erode their joie de vivre, their idealism — and their assumption of immortality. As a child matures, he sees death and pain everywhere about him, and begins to lose faith in the ultimate goodness of man. But, if he’s reasonably strong — and lucky — he can emerge from this twilight of the soul into a rebirth of life’s elan. Both because of and in spite of his awareness of the meaninglessness of life, he can forge a fresh sense of purpose and affirmation. He may not recapture the same pure sense of wonder he was born with, but he can shape something far more enduring and sustaining. The most terrifying fact about the universe is not that it is hostile but that it is indifferent; but if we can come to terms with this indifference and accept the challenges of life within the boundaries of death — however mutable man may be able to make them — our existence as a species can have genuine meaning and fulfillment. However vast the darkness, we must supply our own light."
~ Stanley Kubrick (1968)

Jack Nicholson, who Kubrick had originally wanted for the lead in his dream project, Napoleon,  before starring in his masterful horror film The Shining,  was asked about Stanley, "Define Kubrick?",  he said "umm... brings new meaning to the word meticulous."