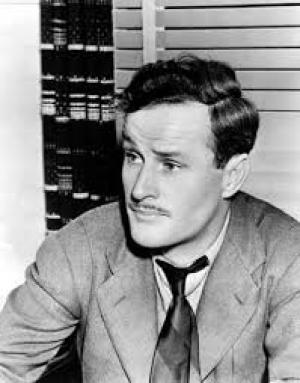 'The best director is the director whose handprints are not on the film.'
~ William A. Wellman

Wild Bill Wellman had a remarkable Hollywood career, starting in 1919 and still garnering attention in 2018 via a remake of one of his famous films, A Star is Born. By the time he’d delivered his own version of the story he co-authored, in 1937, he’d already lived several lives. Wellman was born to Boston establishment blue blood in 1896 and turned out to be a rebellious and disaffected boy who tested the patience of his parents. He eventually ran off to Europe to join the war prior to America’s entry and found himself in an Ambulance Corps and then the French Foreign legion before being assigned to the Lafayette Flying Corps to train as a pilot. He distinguished himself in the conflict and became both wounded and decorated in the conflict.

Returning to the USA after the war he put his flying experience to good use as an instructor and in flying shows, but after landing in a field that was frequented by silent film legend Douglas Fairbanks, his tales of exploits drew an offer of assistance from the star. Wellman went to Hollywood and worked his way through the ranks, initially trying acting, which he disliked immensely, before he set his sights on directing. He settled into the studio system and won contacts at Fox, Paramount and Warner Brother’s in succession, directing for each and becoming known as a reliable and efficient professional. A run of half a dozen films at Fox in the 1920’s was broken by one each for Columbia and MGM before he started his run at Paramount in 1926. He made two films for the company before, right time right place, he was given the prestige job of directing the lots biggest star, Clara Bow in the WWI flying drama, Wings, which won the very first Best Picture Academy Award.

The following year Wellman reteamed with his Wings writer to deliver a follow up of sorts, one that would help to make Gary Cooper, who had a small role in Wings, a star in the Fay Wray co-starring, Legion of The Condemned. Wellman proved adept at managing the transition from silent film to sound but, after he went back to the WWI flyer genre for a third time, with Young Eagles, the extent of the failure led him to leave Paramount and sign with Warners in 1930. After his first effort, a musical comedy with a young Joan Bennett, he was given the prestige assignment of The Public Enemy, by then head of production Daryl F. Zanuck, and promptly made James Cagney a big star by swapping him from a support to the lead role. The film was a huge hit and also featured Joan Blondell and helped to make Jean Harlow a star in a smaller part after Louise Brooks pulled out. He followed up with another  hit for Cagney and Blondell with Other Men’s Women.

In an incredibly prolific period Wellman made 18 films in 4 years for the studio, notable amongst these were Night Nurse, with Barbara Stanwyck, Blondell and Clark Gable, The Star Witness with Walter Huston and Midnight Mary with Loretta Young and Franchot Tone.  Wellman seemed to have an affinity with strong actresses and worked with Stanwyck on So Big!  and on The Purchase Price and with Loretta Young in The Hatchet Man (with Edward G. Robinson) and Heroes for Sale. He finished his stint at Warners with The College Coach, a hit for Dick Powell and Ann Dvorak.

Wellman worked for independent producer Walter Wanger before he made an Irene Dunne vehicle, Stingaree, for Merian C. Cooper at RKO. Zanuck had set himself up as the supremo at Fox by 1934 and Wellman went to work for him with a Spencer Tracy film and then on a Gable and Loretta Young hit, The Call of The Wild, adapted from the Jack London novel. A short stint at MGM produced a couple of nondescript films and an uncredited spot on a Tarzan instalment before David O. Selzick produced the film still associated with Wellman, one he wrote and directed, the seemingly ageless A Star Is Born. Selnick continued the association with another fine film, Nothing Sacred, written by Ben Hecht. Hecht had written it as a vehicle for his friend John Barrymore, but Selzick wouldn’t hire the alcoholic actor and Frederic march took on the role, opposite the wonderful Carole Lombard.

Wellman made a production deal with Paramount and directed another WWI flyer effort, Men With Wings, starring Fred MacMurray and Ray Milland before he teamed Milland with Gary Cooper in the massive hit, Beau Geste. The quality continued with a Ronald Coleman drama, The Light That Failed, in 1939 before Wellman took a 3-year break from pictures, returning in 1942 for a couple of efforts for Zanuck at Fox, Thunder Birds with Gene Tierney and Roxie Hart. Wellman teamed up with Barbara Stanwyck for 2 well received efforts, The Great Man’s Lady, opposite Brian Donlevy and Lady of Burlesque. Fox then provided him with his undisputed masterpiece, the classic western The Ox-Bow Incident, starring Henry Fonda, Dana Andrews, Harry Morgan and Anthony Quinn. It was duly nominated for best Picture and lost to Michael Curtiz’s Casablanca.

Wellman stayed with Fox for the hit Buffalo Bill, starring Joel McCrae, Linda Darnell and Maureen O’Hara. He was talked into directing The Story of G.I. Joe by Ernie Pyle himself, the subject of the film, played by the unknown Burgess Meredith and helped make Robert Mitchum a star in the process. He produced and directed Gallant Journey, an ode to the early days of aviation with Glenn Ford and in 1947 he starred James Stewart in the odd political satire Magic Town, written by Frank Capra regular Robert Riskin. The Iron Curtain was a Cold War type Dana Andrews and Gene Tierney vehicle for Fox and Yellow Sky was a brilliant, biting western starring Gregory Peck and Richard Widmark. Wellman ended the decade with a solid war film, Battleground, starring Van Johnson, which garnered him his second Best Director Oscar nomination.

Entering his fourth decade as a director, Wellman made a couple of undistinguished films before he re-teamed with Clark Gable for Across The Wide Missouri. His next effort was also for MGM and also a western, this time for Robert Taylor called Westward The Women. He made a Shelley Winters film, My Man and I before he signed with John Wayne’s production company Batjac, for what was to be the last significant collaboration. He directed 6 of his final 8 films for Batjac, amongst them the John Wayne starring vehicles Island In The Sky, The High and The Mighty (for which he received a Best Director nomination) and Blood Alley. He finished his career with two war films for Warner Brothers, Darby’s Rangers starring James Garner and an essay on where it all began for him, Lafyette Escadrille starring Tab Hunter and Clint Eastwood.

William A. Wellman dies at the age of 79 in 1975, two years after The Directors Guild of America awarded him a Lifetime Achievement Award. He was a no nonsense, driven 5 times married (there’s a clue) alpha male, who thought acting was effeminate and picture making was not art. This was a position not a million miles away from those of his peers John Ford and Henry Hathaway, and in truth Wellman existed somewhere in the space between those two bulls, if closer to Hathaway in level of recognition. Like Ford, he gave the Auteur Theory short shrift (see above quote) and would never be the critics darling and would ave cared less to boot. He was broadly disliked as a character but tolerated by a system that enjoyed his efficiency, and therefore profitability in turning out product. He was a first-class storyteller and managed to direct almost 80 feature films, and his best work remains urgent and relevant.