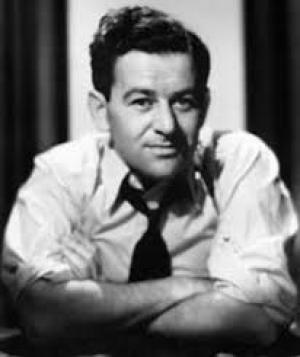 Uncle Carl's gets it right

'I'm accused constantly of having 'no signature.' That's the big artistic demerit. You can't tell a Wyler film from another man's film just by looking at it.' ~ William Wyler

The founder of Universal Pictures in 1912 was so keen on nepotism that a popular rhyme came into common usage soon after, ‘Carl Laemmle, had a big family’. Laemmle was a German emigre and in 1920 he gave a young, errant cousin a start and German born Willi Wyler went to New York to work for Uncle Carl. It would prove to be the most consequential act of nepotism in the approximately 70 odd cases on record of Uncle Carl’s largesse as young Willi would go on to become one of the most successful directors in Hollywood history. Wyler spent two years in New York learning the ropes and then headed west, where he apprenticed a further three years before he graduated to directing B westerns in 1925.

By 1929 Wyler had proved his worth and was given the prestige job of directing the first non-lot Universal sound film, a western (of course) called Hell’s Heroes. It was the first telling of the story that John Ford would shoot as Three Godfathers, and fitting as Ford also cut his teeth on silent B westerns at Universal. Wyler shot a dozen A features for Universal before the Laemmle era came to an end, notably John Barrymore’s Counsellor At Law and his then wife Margaret Sullavan’s The Good Fairy, with a script by Preston Sturges. In 1936 Wyler teamed up with producer Sam Goldwyn and embarked on an astonishingly successful critical and commercial run in a number of films, most shot by Gregg Toland who became an integral part of Wyler’s team of technicians.

In a sequence of 7 films over 7 years, Wyler created 7 Best Picture nominated films, and was nominated as Best Director 5 times, but it was a 7 year wait for the Best Director Oscar. The golden run started with These Three, a Lillian Hellman story starring Merle Oberon that Wyler would remake in 1961 as The Children’s Hour with Audrey Hepburn. He followed with Dodsworth, a brilliant showcase for actor Walter Huston, whose son John was one of Wyler’s closest lifelong friends. Goldwyn lumbered his contract director with a complete and patch up job on Come and Get It, an Edna Ferber story that Howard Hawks had altered while Goldwyn was in hospital, getting fired for his trouble. Wyler and Toland had a triumph with their next collaboration, Dead End with Joel McCrea, Sylvia Sidney and Humphrey Bogart. In the next period, Goldwyn loaned out his star director to Warner Brothers for two films, both starring the formidable Bette Davis, in Jezebel and the masterful proto-noir, The Letter, and Wyler cast her in a Goldwyn production, The Little Foxes.

Wyler showed his penchant for bringing classic literature to the screen with his first-class adaptation of Wuthering Heights, starring Oberon and Laurence Olivier. The theatre renowned Olivier would forever credit Wyler for teaching him about screen acting, and even offered Wyler the job of directing Olivier’s adaptation of Henry V during WWII, only to be turned down and told to direct it himself. Wyler followed the Bronte film with a return to the western in the Gary Cooper vehicle, The Westerner. In 1942 Wyler capped off his magnificent run with a film that won both Best Picture for Goldwyn and Best Director for himself, the WWII propaganda piece, Mrs. Miniver with Greer Garson and Walter Pidgeon. After America’s belated entry into the fight against fascism, Wyler enlisted and soon became one of the most celebrated of the Hollywood figures to serve with distinction in the war effort.

"The war was an escape to reality... The only thing that mattered were human relationships; not money, not position, not even family... Only relationships with people who might be dead tomorrow were important. It is a sort of wonderful state of mind. It's too bad it takes a war to create such a condition among men." ~ William Wyler

Wyler directed the influential WWII documentary, The Memphis Belle and returned to Hollywood and Goldwyn for another Oscar winner, the timeless and timely The Best Years of Our Lives, a stark tale about returning soldiers integrating back into civilian life. Wyler was much affected by his time in the service, including losing much of his hearing, but agreed to Frank Capra’s offer to join an independent company in partnership with Capra and George Stevens, Liberty Films. Oddly, Wyler chose a French 1830 psychological novel to adapt, but problems with financing brought on by the financial failure of the company’s first film, Capra's It’s a Wonderful Life, soon saw the partners sell out to Paramount, where each of the directors secured five-picture deals as a result.

Wyler’s first effort for his new studio was one of his best, The Heiress, which won awards aplenty, not least for star Olivia De Havilland. The remaining films in the contract included the gritty Kirk Douglas vehicle, The Detective, a reunion with Olivier in a Theodore Dreiser adaptation Carrie, with Jennifer Jones, the mega hit Roman Holiday, which made a star of Audrey Hepburn opposite Gregory Peck and a reunion with Bogart in The Desperate Hours. Wyler became a gun for hire in the next phase of his career and provided a western for Allied Artists with Gary Cooper in Friendly Persuasion, and another excellent western with Gregory Peck and Jean Simmons in The Big Country.

MGM signed Wyler as replacement for the ill Sidney Franklin to direct the blockbuster remake of its old silent biblical epic, Ben-Hur, and that stroke of luck saw the biggest commercial hit of the acclaimed director’s career and its haul of 11 Oscars was a record. The last decade of productivity saw Wyler produce 5 films of varying quality but undeniable intent. The Children’s Hour allowed a more liberal telling of the lesbian element of the Lillian Hellman story that was not possible with his 1936 version. He followed that 1961 film with a taut psychological masterpiece in 1965 with The Collector, with Terence Stamp. The breezy How To Steal a Million saw a third film with Audrey Hepburn, paired with Peter O’Toole before he enjoyed a huge late career success with Funny Girl, the Barbra Streisand star making vehicle. The old stager went out in 1970 with a fizzle for Columbia, trying to be relevant in the American Renaissance era with a social issues drama that pleased no one.

William Wyler had a stellar Hollywood career, but by the time the much-hyped auteur theory became holy writ in understanding film, Wyler was seen pretty much as American Cinema Du Papa. He wasn’t American enough in the way that Ford, Hawks, Fuller and Ray were, and he wasn’t European enough to satisfy the French purists. And he wasn’t Hitchcock. What he was though, was an incredibly competent filmmaker, technician and storyteller who was grounded in all the key elements of cinema during its heyday. Wyler was something of a relentless, focused talent, who would not stop until he saw what he needed unfold before him. He had a reputation that he was so demanding on actors that they would avoid repeated projects with him, but the evidence says otherwise. Merle Oberon, Gary Cooper, Bette Davis, Humphrey Bogart, Gregory Peck, Frederic March and Audrey Hepburn would be the first to claim otherwise, as each made multiple films with the director, who provided 14 Academy Awards for acting in the roles he cast.

William Wyler won 3 Best Director Academy Awards, second only to John Ford and on a par with Frank Capra. He won for Mrs. Miniver, The Best Years of Our Lives and Ben-Hur, and it’s a testament to his ability that these films might not always get into every critics’ best three Wyler films, so fierce is the competition. Regardless of the auteurist snub, William Wyler was an old school movie guy who carved a mainstream Hollywood career second to none, and in doing so created a brilliant body of work that was and will remain critic proof.