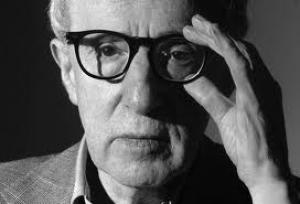 “This is my perspective and has always been my perspective on life. I have a very grim, pessimistic view of it. I always have since I was a little boy; it hasn’t gotten worse with age or anything. I do feel that it’s a grim, painful, nightmarish, meaningless experience and that the only way that you can be happy is if you tell yourself some lies and deceive yourself.”  ~ Woody Allen (2012) when asked if he believed that happiness in life was impossible.

Born Allen Konigsberg in Brooklyn and getting his showbiz start via stand-up comedy Woody Allen has carved a singular niche for himself in the cinematic world, his name is a virtual byword for a particular style of neurotic observation on a bleak and unfeeling universe. Allen made the transition from playwright to features in the late 1960's via his broad and surreal scripts that were anarchic, energetic and wildly satiric, like Bananas, Everything You Wanted To Know About Sex and Sleeper. Woody started to deepen his observational humour and embrace more personal dimensions with the satiric Love and Death, a parody of serious Russian literature before settling on the definitive Manhattan modern love story expressing the gap between men and women with the brilliant Annie Hall.

Having found a mature voice Woody left his broad humoured past behind for a time and made the deep and thoughtful Stardust Memories, gently mocking his own reputation in the process, before hitting a hot streak in the 1980's with several showbiz themed pieces like Purple Rose of Cairo, Broadway Danny Rose and Radio Days. Working on 3 films simultaneously was his usual practice, one in pre-production, one in production and the other in post production saw his output become patchy and his reputation suffered as a result. Allen can be replied upon to create the odd great film by depth of talent and weight of numbers, but it's a fraught way to work and very few artists are able to pull of the balance of quality and quantity.

Woody unexpectedly leapt back into form with a streak, kick-started by a previously unthinkable event, he left New York to make films in other cities! Decamping to London, Woody made the very sharp, Match Point, foot faulting on the next Scoop, but recovering in Spain with Vicky Christina Barcelona. Woody obiously found Paris inspirational and delivered one of his very best efforts in Midnight in Paris, and followed with a sure footed effort in Rome for To Rome With Love.

Regardless of any future output, and longevity is a strong suite in his genes, his back catalogue ranks him as one of America's finest filmmakers in any era. Woody has shown that he is a true auteur, and many a great actor is lining up to work with him for good reason, and given the sheer joy and brilliance he is capable of it would be foolish to ever say his best work is behind him, maybe like Picasso he'll be putting out stuff into his 90's? Viva Woody.

The Curse of the Jade Scorpion
Hollywood Ending
Celebrity