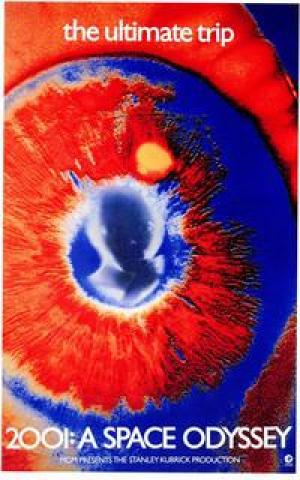 Kubrick and Clarke and the meaning of life

This is Kubrick and Clarke’s meditation on the meaning of life no less, set within the Darwinian precepts of evolution and entirely rejecting religious or supernatural explanations. The film establishes the link between our ancestors using technology to learn to kill for survival and our future generations having to ‘kill’ technology to survive. The intellectual ideas are bold and supported by cinema advances that created a new language of how we view a ‘space’ film, so much so that virtually without exception (okay, Tarkovsky) every film since has used the Kubrick/ Doug Trumball standard look in order to appear ‘authentic’.

The monolith is a true Hitchcockian ‘McGuffin’, a relic from another civilsation perhaps with no deliberate meaning attached. Clarke had an idea of what finding other intelligent life would mean to humans, but he leaves the mystery hanging, and it’s the device by which Kubrick propels the narrative. The attention to detail visually is stunning, the result of years of work, and it’s aided and abetted by quite intricate use of music, as much of the film is dialogue free. Kubrick uses two different Strauss’ to counterpoint his visuals. The fact that he uses Johan so soon after Ricard is almost certainly an aural joke. It would be like following a Led Zepplin epic with Barry Manilow in a modern sense. The humour in the mating manouveres to the Blue Danube waltz, where the circular space station has a definite similarity to female genitalia about to receive the phallic ship could only be intentional.

In the early scenes the music is a cacophany of sound, but voices are detectable, humans making codes out of the chaos, learning to control their random, indifferent environment. Once the apes learn to use tools to kill for survival, a key development in the ability to control your environment, the relentless thrust to push out into the Cosmos begins. A famous jump cut and we’re there already, with vague hints of what the discovery of a monolith on the moon will mean to mankind. Clarke was a famous atheist and it’s easy to see HAL as GOD. HAL is perfect, can’t make an error, remind you of anyone? HAL is omnipresent on the ship, in control of everything and seemingly benevolent, but if God makes an error, he cannot be God, the lie is revealed. HAL makes a mistake and seems just as capable of killing as the astronaut-apes he shepherds through the heavens. Human reason and ingenuity overcomes the ‘god’ figure and man continues his search for meaning, leaving god behind. Clarke ends up indicating that the meaning of life is in the continuation of life, man goes in search of meaning and in this case literally finds himself.  The starchild is as much a part of the stardust as were the first human apes that negotiated their way through the wild African plains.

Clarke would not be aware that new discoveries in the quantum world would make the idea of time and how we view it quite different from the linear model that was once widely accepted, where time travel still happens in pop culture, but he would have known that it makes redundant the idea of a first cause or creator explanation. Kubricks ‘hippy’ trip at the end of the movie is less forgivable now than in the era of psychedlia, but still visually remarkable. Both are saying we are of the cosmos, and that we are still able to find poetry and depth and meaning. No god required.

A landmark film of great mystery and beauty, embracing science and reason, eschewing the superstitious and supernatural, and obviously still confusing the religionists judging by some of the comments this film still attracts. 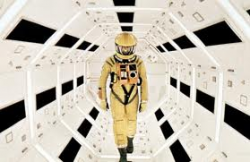 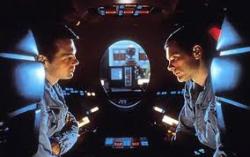