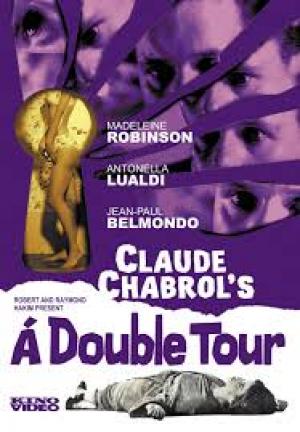 Henri Marcoux (Jacques Dacqmine) is a wealthy Parisian with a beautiful chateau in Provence, a cold and distant wife, two children who are young adults and a gorgeous mistress who lives on an adjoining property. Laszlo (Jean Paul Belmondo) is a boisterous and unpredictable renegade, a friend of Henri’s lover, who is also dating Henri’s daughter Elizabeth (Jeanne Valérie), but he is despised by the strict and emotionally stitched up matriarch Thérèse (Madeleine Robinson). Richard (André Jocelyn) is the son who shares his mother’s conservative attitude to life, as opposed to his sister who is attracted to the bad boy Laszlo. Léda (Antonella Lualdi) is the free spirited artist who is seeing Henri, and while Thérèse knows of the affair and tolerates it as long as a scandal s avoided, Henri’s children are unaware. Just as the situation becomes too much for Henri to bear, he determines to leave his wife and live with the scandal, disaster strikes.

Chabrol opens the film with a light hearted sequence involving the sexy housekeeper Julie (Bernadette Lafont), showing off her womanly assets and flirting with the milkman. The joyous and unfettered interplay s soon counter pointed by a stunning camera shot that unearths a darker dimension, one revealing Richard to be a peeping Tom. Chabrol shows Richard to be an outsider in his own life, not only is he outside of the earthy delights of the lower class ‘help’, but he also discovers he is outside the life of his family as he overhears his parents argue loudly over their differing opinion on divorce, a rupture that would seriously disturb his privilged fastness. Crucially, Chabrol has Richard discover the news via eavesdropping, his peeping Tom act delivering him an unexpected and unpleasant result.

Chabrol essays the class divide in À Double Tour,  a theme that would reoccur in much of his work over his career, Laszlo representing the free spirited, wandering ‘lower’ class who disrupts the bourgeois life of the Marcoux clan. Henri is tired of the duplicity and fake, mannered behaviour of his existence, and despises his clinging and controlling wife, he sees the opportunity for an authentic life with Léda and determines upon that path. Thérèse is a pragmatic figure, and will tolerate an affair, but not separation, and divorce on no account. Richard has learned his personal politics at his mother’s teat, and soon her poisonous blood shows through in his attitude to Léda. The young man is an isolated figure, lost in a world of disconnection, protected from reality by privilege and lifestyle and thoroughly unable to assimilate easily with the normal world. Richard sums up his position in a moment of self awareness at the end,“When I look (in the mirror) I  don't see myself, I see my mother, the face of a living corpse".

Laszlo is the cultural hand grenade tossed into the comfortable Marcoux enclave, and his mantra is “At least I know how I feel”.  Laszlo represents freedom and chaos to Thérèse, a woman who refuses to acknowledge any feelings and who projects the family problems onto Laszlo, failing to recognise the fault is in her. Thérèse destabilises her daughter’s relationship with Laszlo and attempts to shore up the rocky family infrastructure by threatening to destroy Henri if he seeks a divorce, “I’d insult you in public, your life would be unbearable”.  Thérèse’s emotional fascism has created an automaton in Richard, a man who goes through the motions of feeling, as in his ‘conducting’ of Berlioz in the fields, but who is removed for true feeling. Richard says of Berlioz, “anyone who dislikes this music is wrong”, but it’s an intellectual, not an emotional response. Richard wants to possess beauty, in the same way he drools over Julie, and doesn’t understand beauty can’t be owned, so he decides if he can’t own it, he can destroy it.

Chabrol cast the very fine Madeleine Robinson as Thérèse, an experienced and popular actress since the 40’s and she delivers the performance of her life as the vile matriarch, and it’s the fulcrum upon which the film turns. Jean-Claude Brialy, the star of Chabrol’s first two films, was set to take the Laszlo role but fell ill, and Chabrol cast the little known Belmondo in his first major role, and he made the best of the scenery chewing part, and his ‘rebel’ persona was then expanded by Godard in Breathless.  Chabrol employed a relatively elaborate (for the time) flashback device to present the story, utilising the Rashoman technique of showing the same scene from differing perspectives across the narrative, and it keeps the flow and pace effective. Chabrol also stitches in a sly visual metaphor of  Thérèse's carefully constructed bourgeois life, via Laszlo's unravelling of Thérèse's knitting, and her attempt to put it back together again, and one assumes he also intended to allude to a certain Mme Defarge as well.

À Double Tour  failed to set the box office alight, and its tone seems a little out of sync with the Nouvelle Vague aesthetic that Chabrol helped establish, but it’s aged particularly well. The films primary colours and garish tones set it apart, but its focus on the petty intrigues of the bourgeoisie and of the life affirming choices of embracing freedom are timeless and eternal.  À Double Tour  is a fine and delicious early Chabrol, full of menace and implied malevolence, a tasty morsel of diabolic atmosphere and a teaser of what was to come from the master filmmaker. 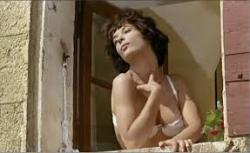 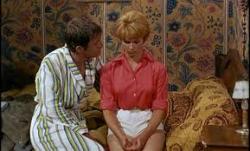 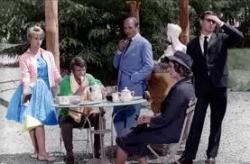 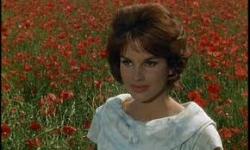 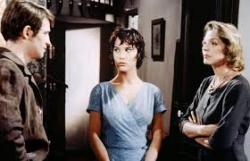 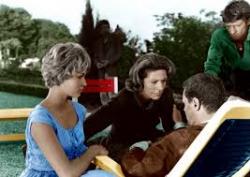 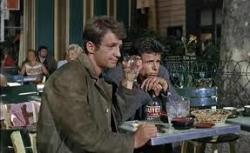