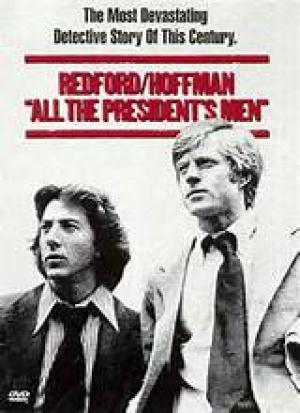 All The President's Men

"The fact of the Watergate cover-up is not nearly as interesting as the step into making the cover-up. And when you understand the step, you understand that Richard Nixon lied. That he was a criminal..... After Nixon resigned in 1974, he engaged in a very aggressive war with history, attempting to wipe out the Watergate stain and memory. Happily, history won, largely because of Nixon's tapes."
~ Bob Woodward

Noted liberal Robert Redford called the journalists involved in bringing the Watergate scandal into the public eye, and was told they were writing a book on the event, so he waited and promptly bought the rights to All The President’s Men  by Washington Post journalists Bob Woodward and Carl Bernstein. Redford took the key role of Woodward for himself and assiduously set about presenting the filmed version of the greatest scandal in American political history. Redford employed the then hot talents of director Alan J. Pakula to helm the project and William Goldman to write the screen adaptation, ensuring the modern detective story held centre stage. Redford took the view that the story was so well known that the more interesting angle for the film was the relationship between the two contrasting journalists who made an uneasy partnership, making the casting of Bernstein crucial, and the subsequent signing up of Dustin Hoffman to play Bernstein an inspired move. When Redford called to offer him the job, Hoffman merely quipped, “I thought you’d never ask.”

Redford’s association with Pakula went back to Pakula’s producing Inside DaisyClover, the actor’s earliest screen success in 1965, and All The President’s Men  is often regarded as the third entry in Pakula’s ‘paranoia trilogy’, following closely on the heels of the others, which also happen to be two of his best films, Klute  and The Parallax View.  All three addressed the growing environment of suspicion and mistrust that flourished in the wake of the wrenching assassinations of the Kennedy’s and of Martin Luther King. Young America in the early to mid ‘70s was also coming to terms with the fact that the promise of the ‘Summer of Love’ had led nowhere, and the nascent counter-culture were experiencing the establishment fighting back and flexing its muscle. The already secretive US government was dealing with the ‘people power’ movement of the anti-Vietnam War activists, a movement that had gained widespread support on the back of the counter-culture rise of the 1960’s as University admissions rose exponentially through that decade. Campuses became hotbeds of radicalism as the flower power generation sought to throw off the legacy of their elders’ policies, one that had supplied a Cold War that nearly brought the planet to nuclear annihilation and tensions around the country rose. Issues reached a flashpoint with the tragedy at Kent State, where 4 students were shot dead by their own government troops as they peacefully protested the war, and paranoia was rampant on both sides. The Nixon administration dug in and ramped up its covert operations, aimed at identifying its enemies within the USA as well as outside the country.

It is in this atmosphere that Bob Woodward stumbled upon a story that soon snowballed into the biggest political detective story of the century, the break in to the offices of the Democratic Party’s HQ at the Watergate building in Washington. Woodward was one of the least experienced reporters at the Washington Post, but knew enough to see that a CIA connection to the 5 burglars charged with the break in should be ringing alarm bells, along with the mysterious appearance of a lawyer on their behalf when the plaintiffs had made no request for one. The pushy and more experienced Joel Bernstein soon muscles in on the story and the pair convinces their boss, Ben Bradlee (brilliantly played by Oscar winning Jason Robards) to support their investigation into where the trail leads. Pakula handles the investigative ‘policier’  side to the tale with flair and élan, not afraid to build the tension with deliberate pacing and tense mood, and he’s aided by a first rate supporting cast, particularly Robards, Jack Warden and Jane Alexander.

William Goldman, if he hadn’t started the cycle of the ‘buddy’ movies with his impossibly likeable Butch Cassidy and The Sundance Kid  in 1969, he certainly ensured its popularity and soon American cinema was bulging with vehicles for 2 charismatic leading men. Films like Scarecrow  for Pacino and Hackman, or Midnight Cowboy  with Hoffman and Jon Voight, Easy Rider  with Peter Fonda and Denis Hopper, culminating with the daddy of them all with Redford and Newman in The Sting.  Ironically, with this property Goldman had to write a buddy movie for non-buddies, in that it’s plain the relationship between the contrasting Woodward and Bernstein was a professional one only. Redford wanted to emphasise the detective aspect of the investigation, and the sheer hard work that was needed to uncover the full extent of the betrayal of the American people by its leaders. He also understood that the sheer significance of the event gave their activities a dangerous edge, and encouraged Pakula to bring out the thriller overtones in the story, not unlike Redford’s own, 3 Days of the Condor  with director Sydney Pollack.

It is a tribute to Redford’s vision and to Pakula’s skill that the two charismatic movie stars do not overwhelm the project, and the power of the piece is extracted from the intrinsic elements of story and plot. The showbiz part of the equation is subsumed by the significance of the implications of the truth as it begins to coalesce around the minor break in of a non-descript office. These are no ‘star’ reporters who throw their celebrity around; they are hard working guys who won’t give up. A measure of the contempt some of them are held in is voiced by Deep Throat*, their infamous informer, “I don’t like newspapers. I don’t like inexactitude and shallowness.” It is a central theme as the modern media continues to dumb itself down and the ability to hold the powerful accountable is therefore diminished.
* For over 30 years the identity of Deep Throat remained secret, finally widely revealed in 2005 as the second highest ranking agent in the FBI, Mark Fell.

Pakula’s visual style takes a cue from Antonioni in contrasting people with buildings and placing his characters in an overwhelming architectural environment, in his words wanting to suggest “the enormity of impersonal government.”  He uses the remarkable Washington Post set to suggest that the two men are small cogs in a large machine as they chip away at the story. These two lowly journalists are taking on the might of the US government, and they are told their lives are in danger, and Pakula unlocks all that fear and paranoia as a nod towards the nation’s fractured psyche. Deep Throat’s invocation to “follow the money”  proves to be good advice, and ultimately leads to the conspiracy being uncovered. For all their success the reality is still that the ‘money’ has remained where it always was, in the hands of the rich and the powerful, like uber-capitalists the Koch Brothers, whose bulging pockets have poisoned the democratic process in the 21st century.

The biggest scandal of Watergate was not that it uncovered a dirty tricks department aimed at their political opponents in the Democrats (that stuff has existed on both sides of the fence since time immemorial) but that an administration successfully co-opted arms of government to do its political bidding, in flagrant violation of its mandated neutrality. The intelligence community secretly joined the Republicans in locked goose step as laws were trammelled and checks and balances ignored in a rush to destabilise leftist governments (including Australia’s Whitlam government) and to fund right wing insurgencies around the planet. Even the uncovering of Watergate and the subsequent resignation of Nixon did little to stop the black and covert operations, the full reach of which finally became known in the wake of the Iran-Contra affair during the Reagan administration in the 1980’s.

All The President’s Men  justly won many accolades, and was an indication that people were hungry for integrity and accountability in politics, unfortunately this seems as fanciful as ever in a post 911 world, where cynical manipulation of fear has been raised to an art form by politicians who are in the pockets of multi-national corporations like never before. As a piece of film-making All The President’s Men  is a superior example of the political thriller, as a reminder of the dark heart of conservative, vested interests it is, notwithstanding the ‘victory’ their investigation delivered, a depressing reality check. 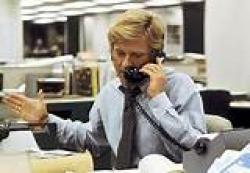 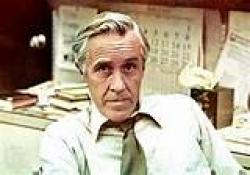 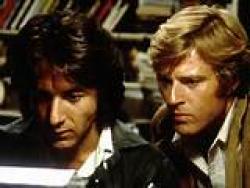 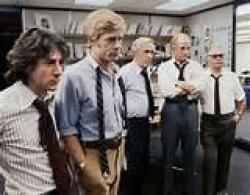