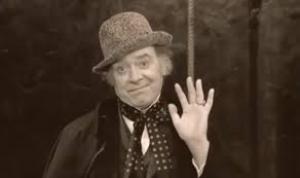 And The Ship Sails On

Fred and the rhino go to sea...

“An artist is a provincial who finds himself somewhere between a physical reality and a metaphysical one. It’s this in-between that I’m calling a province, this frontier country between the tangible world and the intangible one. That is the realm of the artist.”
~ Federico Fellini

Federico Fellini had conquered the cinematic world at least three times when he stepped up for a late career masterpiece in 1983 with the wonderful fin de siècle,  magical realismo of And The Ship Sails On.  Fellini was 62 years old and not in good health at the time he made the film, in fact he had been told by his doctor that his heart could give out at any time, so he invested a lifetime of thought and genius into its production, intending it to be his farewell artistic statement. In an irony that Fellini no doubt appreciated on many levels, he lived for another 11 years and made 3 more feature films. Fellini had also been a fierce critic of opera over the journey, most probably because of a self-confessed contrarian streak in him, as every Italian was supposed to love the musical form. The reflective tone continued the tradition of his other master works, I, Vitelloni  and Amarcord, but his observational eye alighted on a group of people with less personal relevance than in those fine films.

On the eve of WWI an unconnected group of aristocratic opera lovers gather to sail out to the tiny Italian island of Ermino to scatter the ashes of Edmea Tetua, a famous diva. The motley crew sets sail for the island and the various stories and relationships of the passengers are related by a narrator, the journalist Orlando (Freddie Francis) who says “Where are all these characters going?”  The liaisons and petty jealousies surface as well as intrigues and rivalries as the ship gets closer to the island. The captain takes on some Serbian refugees, which creates tension Austro-Hungarian royalty on board, and soon the ship comes under military pressure to give up the dispossessed, a request that causes further division.

The project had its genesis in the fact that Fellini had been contemplating a feature on an alternate theory on the causes of WWI for some time, and had a project titled The Assassination of Archduke Ferdinand in his archive. He re-tooled the script, adding the scattering of the diva’s ashes, inspired by the real life 1977 event where the ashes of Maria Callas were scattered off Greece, and added a rhinoceros, inspired by his schoolboy concern for a sick zebra. He had surmised at a young age the reason that the zebra was sick was because it had no female company, like the rhino, it was alone. As Fellini later wrote, “Only one rhinoceros is the same as only one zebra.”  The film is as much about humans needing and wanting to interact with each other in every way possible, and of the sometimes arbitrary dividing lines that can prevent this from happening.

The political subtext that is often read into the piece is more than likely a Fellini ‘McGuffin’, an illusory hint at a layer of subtext that was never intended to be taken as a serious component. In many ways, of course,  Fellini was never a political neo-realist during the glory years of the movement, he was always an artist-in-waiting. The maestro uses the device of ‘Europe on the eve of the war’ to observe the various eternal divisions between humans, not merely ones dependent on the times and circumstances surrounding the Great War. Fellini essays class divide, love, betrayal, ethnic tension, greed, ambition, hope and fear, i.e. things that remain a constant source of the story of humanity. Fellini's wry and sometimes melancholic observations are voiced by a journalist, an 'everyman' set of eyes and ears to bear witness to the mundane, the absurd, but also to the sublime.

In And The Ship Sails On,  Fellini makes his peace with opera and centres his beautiful and humanist masterpiece around a dead singer, hailed as the greatest ever, as her admirers and fellow artists ponder the mystical ‘secret’ that made her so great. Of course Fellini undercuts that notion with some farce, this time with a séance where the rivals attempt to extract the secret from the dead woman. The intrigues and jealousies that surround the group are exacerbated by the relationship the passengers must develop with the new refugee arrivals. Fellini moves away from focusing on the divide between the original passengers, as the refugees force a realignment of allegiances. As diplomatic moves are pondered, Fellini uses the moment to remind us that we are all ‘dust in the wind’ as he counterpoints the political stand-off with the poetic and beautiful ceremony that scatters Edmea’s ashes to the sea.

Fellini was always attracted to the clowns and circus characters, even as a boy in Rimini, and one of his early jobs was as a caricaturist and cartoonist. He eventually peppered his films with odd, colourful characters, over-sized caricatures or cartoon-ish and satirical types that emphasised the absurdity of life, and did so with such singular verve that we now have the descriptor 'Felliniesque'. And The Ship Sails On  is no exception, from the Royal Prince looking like Billy Bunter in a military uniform to Orlando and the rhino in a lifeboat, an unforgettable image. Fellini may be making some serious points, as when he has the hungry refugees staring through the window at the sumptuous banquet the elite passengers are eating, only for a nun to blithely say, “Divine providence will look after them”  but he underlines them with humour. Fellini merely has the English nymphomaniac gather up food from the tables and take it out to feed them, divine providence indeed.

At every point Fellini undercuts the pathos and drama with humour, evidenced by the filming of the ‘singing contest’ sequence in the boiler room. There may be a serious point to make about class divide, about the haves and the have nots, but Fellini makes it obliquely and poetically. The aristocracy are venal, indulged and standing on the edge of a kind of redundancy, but everyone (literally) is in the same boat. The film comes alive in moments of shared humanity, when the staid academics, arguing over the provenance of the gypsy folk songs, join the dance of the peasants, along with the randy wife of Sir Reginald. Reg licks his lips and looks on, everyone has their reasons - hands, and a few other things, across the water. Fellini also furthered his claim to being the father of Magical Realism, and his sequences of the wine glass concerto and the hypnosis of the chicken are pure delights.

Fellini was entranced by movies as a child, in love with Fred Astaire and The Marx Brothers above all, his escape from an increasingly fascist Rimini. As if to say to everyone, this is the magic of the movies, he bookends And The Ship Sails On  with a sepia toned silent film sequence and ends with the cameraman pulling back from the deck of the ship to fully reveal the movie studio and the technicians at work, Fellini amongst them. It is an admission that movies are magical conceits, a point he makes during the voyage as the obviously fake sun sets over the fake sea, “It looks as if it were painted”,  one passenger observes. Fellini includes a devastatingly gorgeous slice of constructed silent film footage of the great diva (a subtle joke) that serves as a visual valentine to film itself from the great (and not dying quite so soon) maestro.

And The Ship Sails On  came at a difficult time for Fellini. mired in Orson Welles-like levels of financing problems, it was no small miracle that he returned to the famous Cinecitta to construct this small miracle of a film, which was not a huge commercial success and may not have been universally acclaimed, although it had its admirers, but with the passage of time it looks more and more like a late career gem. Federico Fellini made a fully fledged, if bitter-sweet valentine to showbiz and the cinema of his youth with his next film, the remarkable Fred and Ginger,  re-teaming his (by then ex) wife Giulietta Masina and his movie self from 8 ½,  Marcello Mastroianni. Fred and Ginger reminded us all that the old maestro still had a thing or two to show us, a point also proved deliciously by the poetic, complex, and nostalgic tone poem, And The Ship Sails On. 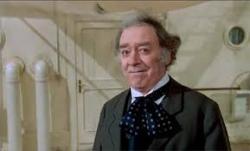 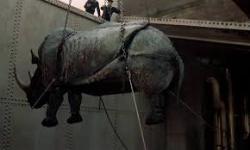 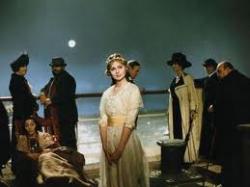