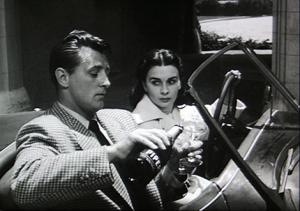 No less a cinema buff than Jean-Luc Godard rated this Otto Preminger outing as one of the 10 best American films of the sound era, and it’s a testament to it’s strange charm that it holds up so well today, like many of it’s RKO stablemates. It’s allure is primarily due to the prim and cultured femme fatale at it’s centre, Diane Tremayne (Jean Simmons) who’s ‘angel face’ hides a dark and murderous heart. Preminger had a couple of A-list writers tinker with the screenplay in Ben Hecht and Ford favourite Frank S Nugent, adapting the story of twisted daughter-father love, and the mighty Robert Mitchum as the male lead, a potent brew for him to stir to perfection. The noir pallette perfectly suited the tasteful Preminger, a cultured Viennese Jew, and the form was one he revelled in, having provided the immensely successful Laura, in 1944, strengthening the connection between earlier Expressionism and the dark themed American pictures of the time.

Frank Jessup (Mitchum) is an ambulance driver on a call to a Beverly   Hills mansion where Catherine Tremayne (Barbara O’Neil) appears to have attempted suicide. Her husband Charles (Herbert Marshall) is a writer and his daughter is found by Frank playing a haunting piano sonata as he’s leaving downstairs, they meet and sparks fly. Diane follows Frank and muscles in on his private life, even setting up a meet with Frank’s nice-girl fiancé Mary. Mary sees through Diane’s protestations of benign interest in Frank, and soon she lures him into her orbit with a job as chauffer and offers of helping arrange her wealthy stepmother to finance a mechanics business for him. It’s apparent the marriage between Charles and Catherine is an unhappy one, they have separate bedrooms, and it’s clear that Diane’s obsessive love for her father has frozen Catherine out. Diane schemes against Catherine at every turn, trying to set Frank against her, despite her support for his business venture. Frank is aware of the dark nature of Diane, but in the best ‘noir’ tradition is powerless to act against Diane, all the while knowing he’s doing the wrong thing, but draws the line at being pulled into a murder plot.

Frank tries to seek redemption by going back to Mary, but she’s not sure Frank has shaken off Diane’s spell and keeps him hanging. Catherine takes out a sports car to go to her regular social appointment, but Charles asks for a lift unexpectedly and the car inexplicably goes into reverse and plummets over a cliff near the driveway and both are killed. Diane goes into a spiral of depression and breaks down at her father’s death and is hospitalised. Frank is grilled by the police as a suspect because the car appears to have been tampered with. Diane admits to her lawyer that she fixed the car, ironically wanting to keep Frank in the clear because of her love for him, but her lawyer (Leon Ames) refuses to believe her and, once the couple are charged with murder, hatches a scheme that Frank and Diane are to marry before the trial. After the trial Frank finally resolves to get clear of Diane, and returns to Mary, but she’s moved on to a friend of Frank’s, a good natured guy called Bill (Kenneth Tobey) and Frank faces the fact that he’s lost everything. Diane effectively closes down the mansion, and goes to her lawyer to dictate a confession, only to be told that she can’t be tried twice for the same crime. She returns home to find Frank leaving for a fresh start in Mexico, she offers to give him a lift, and after drinking a glass of champagne in celebration she drives them both off the cliff!

It may not be an eloquent reply to the great existentialist dilemma, but Diane’s suicide-murder is certainly attention getting and an unusual resolve for an American film, possibly Preminger’s European roots are showing? What’s intriguing about Angel Face is the relationship between Diane and Charles, visually expressed in bedroom conspiracies, like two schoolgirls, as they talk behind Catherine’s back, and in a chess game, it’s clear that the pair are closer to siblings than parent-child, maybe revealing something of Charles’ impotence in the marriage. This is a union no-one can come between, and as Diane tries to drag Frank into her web she realises that her only means of escape from an unhealthy relationship with her father is to find a mature relationship with a man who is not emasculated. Ironically she retreats to her nature and emasculates Frank in the process, as he’s unable to act against his complusive need to be with Diane, even though he knows it’s only a destructive relationship he can have with her. As a sly pointer to societal bias we see the law side with the ‘aristocratic’ Diane, refusing to believe her confession and instead it focuses on the working class Frank as the murderer. Frank will see all the things he’s valued, hard work and honest toil, the love of a ‘good’ girl collapse in the face of Diane’s lies and deceit and allure. Frank starts with a small lie to Mary and before long he’s crossed the Rubicon and there’s no return.

Preminger directs with a sure and crisp hand, never let’s the narrative lapse but allows room for great characterisations from his cast. Mitchum, RKO's biggest star at the time, is great as Frank and the supporting cast are all fine, but the film belongs to Jean Simmons, her devious Diane has arrange of emotions to convince us of her descent from spoiled rich girl to half mad murderess, and she hits every beat. A prime slice of Noir, Preminger will go on to more conventional and in some cases more ‘important’ films, but few will be as intriguing or beguiling as this. 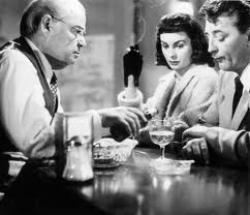 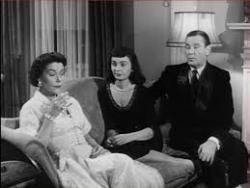 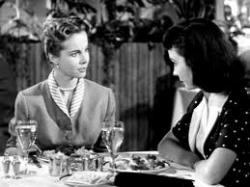 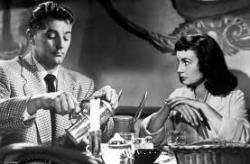 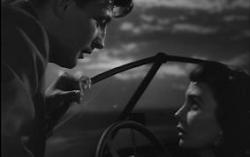