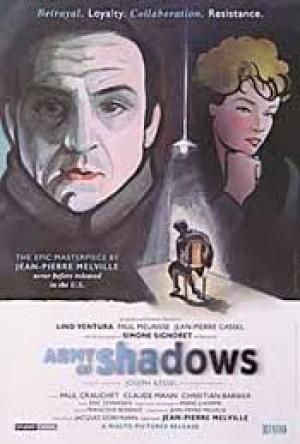 Jean-Pierre Melville specialised in two types of films, crime films and resistance films, and as Les Enfants Terribles,  his unclassifiable collaboration with Jean Cocteau, may be the only film he made outside of those parameters, he can rightly be seen as a director with a narrow focus. It would be a mistake to see this as a limiting constraint on Melville’s vision, as within each genre he extracted a huge variety and scope of both action and ideas, and with Army of Shadows (L'armée des ombres),  the last of his resistance films, he again essays the WWII years of the occupation and comes to terms with his own past. Melville’s earlier resistance films were more compact and intimate, in Le Silence de la Mer  he focused on the relationship between an occupying officer and the family in the commandeered house, and in the later Léon Morin, Priest , the between a widow and a young priest. In Army of Shadows  he essays the full breadth of resistance, submerged amongst the lives of ordinary people and brings the disparate characters to life with all the attendant travails and dangers.

Philippe Gerbier (Lino Ventura) is the head of a resistance cell in the port city of Marseille, but is betrayed and arrested by the Vichy police. Phillipe is housed in a large prison camp, but then taken to the Gestapo headquarters in Paris but manages to escape. Phillipe and his second in command Félix (Paul Crauchet) track down the informer and execute him. The network takes on several dangerous tasks, including spiriting the overall resistance head across the channel to meet with De Gaulle in London. When Félix is captured, Phillipe and Mathilde (Simone Signoret) agree on a plan to try to rescue him, risking the group in doing so. The group lives in constant fear of betrayal and capture as allegiances are compromised and pressure is applied from all angles.

With Army of Shadows  Melville is examining the reality versus the myth of the Resistance as well as resistance itself, and his rigour and meticulous approach unlocks a ‘procedural’, a documentary like unfolding of action that in many ways approximates one of his policier’s. Even in 1968 the image of the plucky, baguette eating Frog, beret tilted at a jaunty angle as he battles the Boche was a Hollywood stereotype, cinematic shorthand for the ‘received’ history when the actual story was much more nuanced. Melville’s own Resistance record is a matter of some dispute, perhaps not surprisingly considering the secretive nature of the work, but it’s clear he participated not only in the regular army, but also in the underground between 1941 and 1945. It’s this background that helps make Army of Shadows  the powerful artistic statement and character piece it is, rather than a mere dry history lesson.

Melville keeps the tension and overwhelming sense of dread in balance, making the point that although there was a war on, for many people ordinary life was as much a priority. The Resistance Movement was peopled by shopkeepers, cobblers, bakers, housewives, doctors, nurses and every other type of ordinary person, the counterpoint to this was these were also the people from whose ranks informers sprang. The Nazi’s were hard pressed to believe how readily the French informed on one another, a situation they also encountered in Italy, but bear in mind they were a people under extraordinary pressure.

Hitchcock liked to show how grim and difficult real acts of malevolence could be, such as the work required in strangling someone, and Melville subscribes to this methodology with the Resistance execution sequence. It subverts all the norms of action-war cinema in the Hollywood sense as we see the mundane impinge on the exceptional when the chosen house is compromised because a family had since leased the house next door. The men are novices in efficiently disposing of an enemy, and the gruesome choices they are confronted with are presented in a neutral tone by Melville, and made to feel all the more horrible for it.

Lino Ventura anchors the film with his quietly dedicated cell leader, by day fronting a Talent Agency, by night fighting the fascist occupiers. A rag tag assemblage of colleagues helps to carry out the dangerous assignments, and to help assist captured operatives where possible, and Melville uses a couple of different sequences to ratchet up the tension. A master of wrangling material into a symphony of detail and nuance, Melville fills the screen with character and depth to capture the full spectrum of the experience without sentiment or artifice.

The ensemble cast was composed of many fine and accomplished French actors, Paul Meurisse, Simone Signoret, Paul Crauchet and Jean-Pierre Cassel who all provided exemplary support for Ventura. Ventura had worked in the excellent Melville film Le Deuxième Souffle,  as did Meurisse, and the two films share the same downbeat and austere aesthetic. Ventura clashed with the prickly Melville on the set of the first film, and by the time he’d agreed to do Army  the pair were not even on speaking terms, and Melville’s directions were conveyed via a third person. Ventura turned in perhaps his greatest performance in the role, so the difficult work environment may even have contributed to the tone of his characterisation.

Sadly for Melville the times did not suit his essay on occupation and the critics savaged it as out of step and dated in the light of the events of 1968. In an era where there were riots on the street and De Gaulle was under pressure from the left, Army of Shadows was dismissed and labelled “Gaullist”, an appalling misreading of the film and ironically it was led by Melville’s previous champion, Cahier du cinema.  The left felt under appreciated in the light of the then widespread Resistance mythology, as would be made clear later in 1969 via Marcel Ophul’s definitive Resistance documentary The Sorrow and the Pity.  Ophul’s shone a light on the uncomfortable fact that if it was not for the communists and others on the left there would have been no Resistance, as many on the heavily Catholic right were either happy to turn a blind eye to the German agenda or, even worse, actively participate in their anti Jewish pogroms via collaboration. Any assessment of the reality of the Resistance is best made after seeing Ophul’s essential contribution to the debate.

Army of Shadows belated release in the USA in 2006, 37 years after its French debut, saw it rightly acclaimed as the vivid and atmospheric classic that it is, winning the New York Film Critic’s award for Best Film of the year! Melville spent the rest of his career absorbed in the crime milieu he so loved, but Army of Shadows  with it’s spare narrative, exposed humanity and Melville’s stunning autumnal visual palette all contributed to a muted and memorable masterpiece. 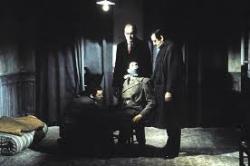