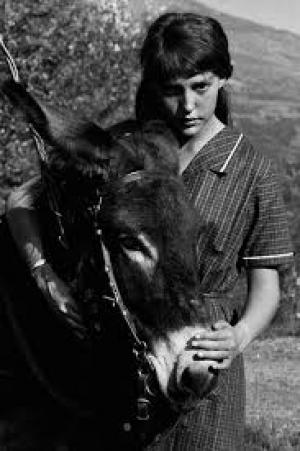 "Painting taught me to make not beautiful images but necessary ones." ~ Robert Bresson

Robert Bresson’s career must be counted amongst the small miracles of cinema, coming as it did out of the heat of WWII and lasting some 40 years and 13 feature films. In a legacy that is defined by its single-mindedness and dedication to an ‘auteurist’ vision, Au hasard Balthazar must rank amongst his finest achievements. With this film Bresson’s techniques and minimalist approach reach a kind of apotheosis via the unlikely central character of a donkey, Bresson’s deliberate choice of a beast of burden and one with overt biblical overtones. In 1965, and after failing to secure funding for his dream project on King Arthur, he settled on a modest production inspired by Dostoyevsky’s The Idiot and concocted a raw fable on man’s inhumanity to man, a humanist hymn on the capricious nature of desire and its attendant consequences.

Maria is a young girl living in an isolated border region of France but is growing disenchanted with her farm life as her father sinks into a depression over a legal dispute with the farm’s landowners. Maria had been in love with the owner’s son, but she finds him a bore and becomes involved with the village bad boy, Gerard, much to the chagrin of her father and the wider town. Her father had bought her a donkey when she was a child, Balthazar, and as Maria grows she begins to neglect Balthazar, who soon is sold off to a variety of owners. The fate of the donkey and of Maria is entwined through the subsequent years as both suffer at the hands of locals before her father resolves his dispute and the owner’s son comes back to make a claim on Maria.

Bresson had honed his techniques to a nicety by the time he came to this film, the main change in regard to his prior efforts was the innocence of the central protagonists, Maria and Balthazar. In the previous decade he’d focused on isolated, grown men and their interior life, a priest, a prisoner and a pickpocket, so having a young girl coming to terms with the ways of the world and of the people around her provided him with a canvas rich in possibilities. Maria is slowly corrupted by the banal corruptions she is exposed to on a regular basis, as opposed to Balthazar who merely endures the casual cruelty of the humans, as well as some small kindnesses.

Au hasard Balthazar is a meditation on human existence, filtered through the lens of a fellow creature, one who also has an existence tethered to the plight of others. Maria, in her own way, is led around by her the chance sensuality of her infatuation with the town bad boy, Gerard, “I’d follow him anywhere”, she says at one point. Gerard is challenged by Maria’s purity, and his churlish response is to eliminate it as a reminder of his own shortcomings, whereas Balthazar is beneath even his conscious contempt. Bresson called the donkey, “a living creature, completely humble, completely holy,” and the symbolism of Balthazar carrying useless stolen booty to his death only adds to the heartbreak.

Bresson is cited by several scholars, around the time of the early 1970’s, as having described himself as either a “Christian Atheist” or a “Catholic Atheist”, either way it is disputed by some Christian sources (quelle surprise), but to split hairs in this regard is to miss the point. The France that Bresson grew up in was a fiercely Catholic country and there is no way his art could escape that influence and, regardless of his latter beliefs, it does not negate a humanistic reading of his oeuvre. The same is true of Terrence Malick in a modern sense. If Bresson is understood through his art then he was a deep thinker in matters religious, and his stripping back of issues to “the essential” is his aesthetic way to approach (and hopefully delineate or capture) the ‘sublime’, however you define it. Some believers have been known to draw the line at belief when their local priest informs them that their beloved pet animal does not have a ‘soul’, but deep connections with ‘saintly’ animals serves to reveal a deep connection of all living creatures.

Bresson presents the steady journey from innocence to corruption in Maria’s young life, until the shocking moment she sells herself to an older, materialistic farmer. Ideals are all well and good, but “reality is different”. The film is a succession of demonstrations of both the banality of evil and of kindness, of how a community functions with all the attendant meanness, gossip, judgement, but tied together in a shared fate, just like the donkey. “Why?” is a redundant question in this world, things just are.

Anne Wiazemsky, the actress who played Maria wrote a book about the experience and revealed that Bresson was prone to the sins of the flesh as much as anyone, and maybe his own personal foibles enabled him to reveal both light and dark in the human experience so readily. Oddly enough one of the films great champions, no less than Jean-Luc Godard, married her the following year. A modern master, Michael Haneke rated this the best film ever made, and there’s a clue of the Bresson influence in the title of Haneke’s wonderful early film, 71 Fragments of a Chronology of Chance, which hints at the Bresson-ian ‘fragments and moments’ approach. Bresson fills his films with small moments, disjointed or angular shots, movements without context, part of a frame, all pieces of a puzzle intended to add up to something greater than the sum of the parts.

Au hasard Balthazar is more or less a companion piece to the film that came after it, Mouchette, another observational masterpiece of life in a small, rural town through the experiences of another young girl. Bresson said of Au hazard Balthazar, “All art is both abstract and suggestive at the same time,” and few films stir the heart and the mind in as many abstract and suggestive ways as this one. This film looks like a dream but kicks like a mule. 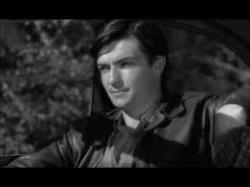 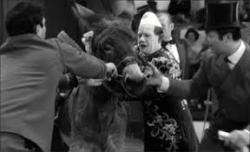 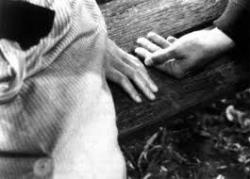 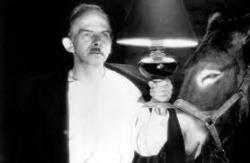