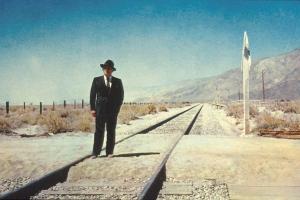 Xenophobia and the man in black

Bad Day at Black Rock was made at a time when the civil rights movement was starting to gain some traction in America and matters of race where figuring more prominently in public debate. It is a film where the action has the compression of a play, despite the cinematic potential of it’s outdoor settings, so it intends unashamedly to deliver a message from the outset by focusing our attention on a core group of xenophobes. Dore Schary was the production chief at MGM keen on ‘social commentary’ films but John Sturges as director was early into a career that would eventually earn him a reputation as an action film craftsman. The key to this film is the taut script, the talented ensemble cast and the crisp and unfussy direction, all combining to make a powerful and valid statement of the psychology of paranoia and the burden of guilt.

The opening is a wide shot of a massive train plowing through the Arizona desert, it pulls up in the one-horse town of Black Rock and a raven like man in black alights. The locals are gobsmacked to see the train stop for the first time in 4 years, and seem overly wary of the stranger. The stranger Macreedy (Spencer Tracy) is in town for 24 hours, ‘in this place it could be a lifetime’, and announces he wants to go to a nearby location called Adobe Flat. The few locals that are around grow more tense and less welcoming by the minute and after Macreedy takes matters into his own hands in order to get a hotel room Hector (Lee Marvin) follows him and enters. ‘Need a hand’? was his sarcastic comment downstairs, after it was apparent Macreedy only has the use of one arm, a raven with a broken wing, and he continues his theme upstairs in the room, making it clear that there is no welcome for him in this town. Local big-shot Reno (Robert Ryan) arrives after a hunt, dead animal strapped to his car, and is informed of the stranger’s arrival. Macreedy goes to see the local sheriff (Dean Jagger) who is an ineffectual drunk, and asks about a local Japanese farmer called Kamoko and is told he was shipped off to an internment camp 4 years ago, after Pearl Harbour, and never returned. The local Doc (Walter Brennan) is the only person who is attempting to help Macreedy, but he warns he’s ‘peddlin’ dynamite’. Reno has a detective agency run Macreedy’s name in LA but it comes back with ‘Macreedy unknown’.

Reno amps up the rhetoric against the stranger, ’he’s like a carrier or smallpox’ and it’s clear for some reason he wants Macreedy to disappear, and his local thugs Hector and Coley (Ernest Borgnine) will do the job. Macreedy hires a Jeep and drives out to Adobe Flat and finds an old burnt down farm and on his return journey is run off the road by Coley. Macreedy has had enough and decides to leave, but there is no train until the next day. Reno confronts Macreedy and discovers he’s an ex-war vet, lost the use of his arm in Italy, and Reno laments the fact that he was rejected after trying to sign up the day after Pearl Harbour. Macreedy goes and takes a closer look at the farm and finds some wildflowers growing over an obviously unmarked grave. Convinced he’s now put the puzzle together he returns to town and sends a cable to the state police, but as Reno controls everything in town the cable is never sent. Doc tries to help after Macreedy is goaded into a fist fight by Coley, Macreedy finishes him brutally with one-armed karate moves, a legacy from his war training. Doc pressures Pete (John Ericson) to finally confess that a group of townsfolk went out to Kamoko’s after Pearl Harbour to ‘rough him up’, but that Reno shot him in a fit of rage, and all agreed to stay silent and cover it up. Pete arranges for his sister Liz (Anne Francis) to drive Macreedy out of town but she betrays the plan to Reno who ambushes the car, Reno shoots Liz but Macreedy is able to make a Molotov cocktail and kills Reno. (A curiously male dominated story, the feminine is only represented by Liz, and she’s just as fawning to Reno as most of the men). The train arrives the next day and Macreedy tells Doc that Kamoko’s son saved his life in Italy, but was himself killed, and that he was delivering thanks and a  medal personally to Kamoko. Macreedy boards the train but leaves the medal for the town.

After the wrench that was the House Un-American Activities Standing Committee, Hollywood’s liberals fought back in subtle and nuanced ways. The claustrophobic nature of collective guilt is highlighted here, as well as the dangers of populist mob mentality. The town was easily led by a dominant personality in Reno and lacked the moral fortitude to draw a line at Reno’s murdering Kamoko. Reno’s motives were jealousy at Komoko finding water on a plot of land he sold him after he thought it barren, outright racism against the Japanese after their sneak attack to drag America into war.  The climate of fear he engendered was used to keep the apathetic townsfolk in line from admitting their complicity. Macreedy points out the the ‘rule of law’ had left Black Rock, and this calls in to mind the lawless romanticising of the ‘west’, or at least the Hollywood notion of same. The film plays out like a western, soon to be one of John Sturges’ most successful genres, (Gunfight at the OK Corral, The Magnificent Seven) but it feels like a thriller as the audience is never clear on why the man in black has come to town. Macreedy uncovers a festering sore and only by confronting their actions and cleansing their collective guilt can the town be re-born and in some ways Macreedy can be seen as acting as Father confessor in black priestly garb at the end, as he seemed harbinger of doom at the beginning. Tracy is fantastic in the lead and his depth and ability gives the film it’s emotional resonance, matched by Ryan as yet another edgy villain, with great support from the rest of the cast.

It might be salient to remind people that in America at the time of the war the great Chinese born cameraman James Wong Howe could not marry his future wife because of miscegenation laws, and ironically he was also on the end of racial discrimination because he was often mistakenly thought to be Japanese. The US Congress passed legislation in 1988 apologising for the internment of Japanese-Americans in 1942, including a high percentage that were US citizens and a couple of Members of Congress, citing that 'race prejudice, war hysteria, and a failure of political leadership’ led to the mistaken policy being implemented.

Bad Day at Black Rock is a direct condemnation of xenophobia, and a compelling and well crafted morality play from start to finish, a superior example of mid-50’s Hollywood cinema. 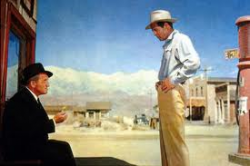 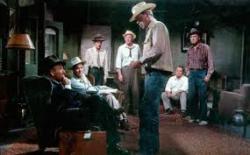 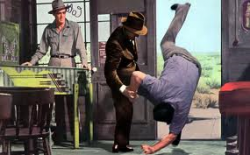