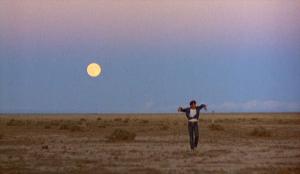 Terrence Malick mined a familiar trope with his 'lover's on the run' film debut, essayed previously and definitively by Arthur Penn in 1967's Bonnie and Clyde. An entire generation was energised by that film's boldness and success and Malick falls into the movie student/nerd clique that includes Lucas, Scorsese, Coppola, Bogdanovich and Spielberg who ventured forth in it's wake. The similarites pretty much end there, as Malick's career defied, and continues to defy categorisation and bears few comparisons to his peers. Arthur Penn encouraged Malick early in his career, and is thanked in the credits of Badlands, which Malick cast with relatively unknown James Dean look-alike Martin Sheen, and the Actor's Studio trained Sissy Spacek.

The story is presented with a matter-of-fact voiceover from Holly (Sissy Spacek) who recounts, in neutral tones her relationship with Kit, (Martin Sheen) a troubled young man who becomes fixated on the pretty 15 year old. As if she's reading excerpts from her diary she recalls the events of an explosive and fatal relationship as if she's reading a shopping list, a device which Malick uses to seperate us from the emotion of the piece, enabling him to posit the question later 'What's the price of detachment'? Kit secretly courts Holly, as she knows her father (Warren Oates) won't approve of the itinerate garbage collector, but as Holly is unpopular with her peers she's soon attracted to the handsome man who "could have any girl he wanted". The relationship becomes sexual, and as if to point up the juvenile nature of both they prove to be inept at it and fail to gain a deeper connection. Holly's father finds out about Kit and bans him from her, he goes to her house and packs her bags, holds a gun on him and says, "I got it all planned".

Kit and Holly go on the run, and again like two children build a tree house in the woods and live rough in this return to Eden scenario as the only people around. Kit sets traps for intruders and keeps himself fit and trained as Holly tries to make sense of the 'destiny' that she and Kit share, even though she admits in the voiceover that she knows Kit is not the man she'll marry. They dance around to Mickey and Sylvia's 'Love Is Strange' and are eventually cornered by the law and Kit shoots his way out. Kit tries to hide out with Cato (Raymond Bieri) but that goes bad and again the couple flee, eventually heading for the Badlands of Montana where they part company. Holly relates that Kit was sentenced to the electric chair and that she married the son of the lawyer who defended her.

Malick loads this film with symbolism, as he does all his productions, and sets it against the teen angst of 1950's America where both Kit and Holly are experiencing their own existential crisis. From the start Kit has a desire for notoriety and the idea of recording his thoughts for posterity, "I can't deny we had fun", reflects that wish and Holly's movie star-struck teen plays right into his hands. Holly is not equipped to deal with reality, her upbringing with a dead mother and neglect from her father has left her drifting in a dream world, waiting for James Dean. her disconnect from her father and what he represents is shown by how she deals with his death, she doesn't. it's as if it's a movie death and she never admits any emotional impact. Kit even says later, 'we should talk about your father', they never do. Holly eventually tires of Kit's self obsession, slowly seeing the quandary she confronts, wondering how "you can know a person and not really know a person"?

If Kit and Holly aspire to be two normal young adults then that door was closed to them long ago, Malick hints at it when Kit shot a young couple he forced down a hurricane shelter on Cato's land, symbolically killing Kit and Holly's 'normal' selves, and unable to look at the result which they run from. Kit sees his destination in Montana as 'a magical land beyond the reach of the law', but as with all his dreams, it's an illusion, he's not James Dean he's a scarecrow with a gun in a field dreaming of fame and notoriety, his delusion extends to him making a pathetic rock monument at the site of his capture. Kit is headed for the Badlands, literally and metaphorically and Holly can't go there with him, she gets off the rollercoaster, and the pair part to the tune of 'A Blossom Fell' by Nat King Cole and they slow dance in the cars headlights in the middle of the endless plains.

Sheen says it's his best film and it's hard to argue. Apocalypse Now has it's charms, but here Sheen totally fits the tenor and mood of the character and provides a screen portrayal of the charming sociopath to rank with the best. Spacek is superb as Holly, a difficult role given the focus on Sheen, but she balances his energy and anchors the piece in the best way. Malick's film is visually gorgeous, and daringly elliptical, he uses unexpected motifs and a soundtrack ranging from a classical Carl Orff to James Taylor to score his scenes. The poetry is both aural and visual and the overall effect is a film of rare power and depth. Malick shows he's not afraid to use a European pacing and languid flow to make his points, something that became a signature part of his work, dwelling on the power and beauty of nature to set it against his morality tales. Malick didn't move out of this comfort zone for his next effort, the stunning Days of Heaven a few years later, he merely added another wheel and made a doomed love triangle as opposed to the fated and memorable couple of Badlands. Movie immortality? Kit got his wish after all. 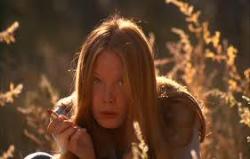