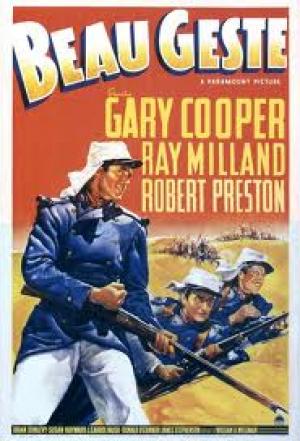 William A. Wellman was one of Hollywood's most durable and interesting characters, and had the distinction of directing the first film to win the Best Picture Oscar, Wings, in 1927. Wellman was constantly in work through the '30's, notably directing the gangster hit Public Enemy  with Cagney, and the screwball comedy Nothing Sacred  with Carole Lombard. Action films were more the forte of this former WWI pilot, and in 1939 he took the job of what was to be a Henry Hathaway film on a re-make of the 1926 Paramount French foreign legion flick Beau Geste. Hathaway had made the hit The Lives Of A Bengal Lancer  with Gary Cooper in 1935 and this film was to be a continuation of that adventure formula.

Gary Cooper was Paramount's biggest star and this was the last film he made on his contract for them, preferring to freelance after this, but he went out with a bang. Ray Milland and Robert Preston were cast as the brothers, and Brian Donlevy as Markoff, the brutal Sergeant, and a young Donald O'Connor played the young Beau Geste. Cooper soon went on to even greater success, particularly at Warne Brothers where he would soon win a Best Actor Oscar for his pacifist soldier in Hawks' Sergeant York  in 1942.

The young Geste brothers are orphaned and taken in by the rich Brandon family, but they are at the mercy of an absent, philandering and spendthrift patriarch and their future and lifestyle is threatened as a result. The boys grow up in idyllic surrounds, keen on the young female ward Isobel (Susan Hayward) and merciless on the priggish Brandon son. The family hope is a spectacular jewel, the 'Blue Water' sapphire, kept in a secret safe and known to only a few. News that the ne'er do well  father is en route to claim the jewel is met by it's sudden disappearance, and one by one the Geste boy's disappear as quickly, all to follow their dream and join the French foreign legion, and suspicion falls upon them as the jewel thieves. Beau (Gary Cooper) is quickly joined by Digby (Robert Preston) and is assigned to Markoff's regiment. John (Ray Milland) arrives and news leaks to Markoff that one of the Geste's has a valuable diamond. Digby is separated from the other brother's and when the outpost they are sent to gets attacked he arrives late to find corpses manning the battlements.

Paramount spared no expense in making the production values the equal of Ronald Coleman's 1926 silent hit, and sent the unit to the same location in Yuma, Arizona. Wellman keeps the direction tight and crisp and gives his actor's plenty of space to shine. Donlevy does best with his villainous Markoff, nominated for an Academy Award for a character who was changed to Russian from the novel's French so as not to offend the French audience, who in 1939 could have used some light escapist Hollywood fare I'm sure. Apparently he was despised by the other actor's on the set.

Wellman was equally adept at handling the ornate drawing room scenes in the Brandon mansion as he was in handling the action scenes in the desert. The cinematography was by sslent era veteran Theodor Sparkuhl, a German educated cameraman, who managed to capture the various moods superbly.  There are some stunning, fluid camera shots of the soldiers running across the sands, and the flashback time sequences are very well done as he unravels the key to what happened at the fort.

Old fashioned entertainment and uncomplicated escapist fare is the order of the day with Beau Geste. Gary Cooper, who'd filled out the Legionaire uniform respectably in Von Sternberg's immortal Morocco  in 1931, so well that he had no less than Marlene Dietrich traipse after him through the desert, relishes the role of steadfast eldest brother. Cooper shows however he is a movie star more than actor, and he went on playing 'decent' types of chaps for most of his career, but like his friend John Wayne, in the right part that required little 'acting' he was peerless. Preston and Milland are fine as the lesser Geste's and there are some sharp bit parts amongst the supports, with Broderick Crawford showing up to good effect and Susan Hayward making her debut.

The sets are brilliant and detailed, the cinematography is efficient and crisp without being showy, and the writing is top shelf, with a nice touch in gentle humour. Robert Carson wrote the script for Wellman, with whom he shared the Academy Award for writing in 1937 for A Star Is Born. Manufactured in the remarkable year of 1939, when so many classics were produced, this one stands proudly with any of them, a story about brotherly love and camaraderie, about dignity and sacrifice and grace under pressure, all nicely put together with the requisite glittering parts on the classic Hollywood assembly line. And when it's done this well, who could argue? 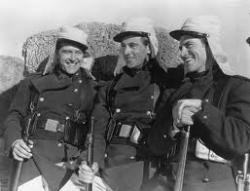 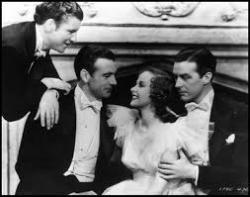 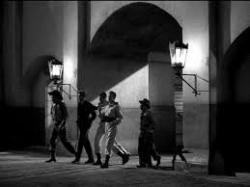 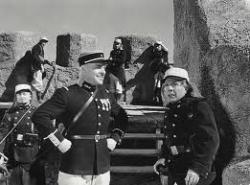 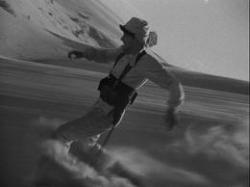