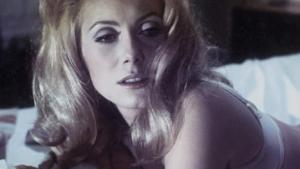 Many are cold, few are frozen

Luis Bunuel obviously knew a thing or two about perversion, and enough about sex to know what matters is not between the legs but between the ears. To further complicate things he has one of the most beautiful women who has ever graced the silver screen in Catherine Deneuve play the title role. As if this is not enough Bunuel then blurs the line between reality and dreams, fantasy and truth to create an unsettling feeling-scape, where maps are useless and the terrain unpredictable. We meet Severine (Deneuve) in a romantic coach ride with Pierre (Jean Sorel) the impossibly good looking trophy/Doctor/husband of many a middle class womans desires, yet from the beginning the facade cracks. Admitting she is ‘cold’, her husband flies into a rage and has her taken forcibly into the woods by the two burly coachmen and beaten and raped. Bunuel then shows us what emotional quicksand he’s set for us, by revealing the incident as one of HER daydreams. What’s a boy to think?!

Torn and confused by her inability to embrace sexual intimacy with her understanding husband, Severine takes mental note of the address of a brothel mentioned by a would be paramour Husson, archly played by Bunuel stalwart Michel Piccoli, and fronts up there to ask for work through the daytime. The Madame (Genevieve Page) is more than interested to have such a woman on her books and christens her Belle De Jour. After a shaky start Severine seems to enjoy the work, and finds her relationship with her husband Pierre ‘normalises’ to the point where she can sleep with him again. Marcel (Pierre Clementi) a young gangster client, becomes obssessed with her and falls in love, Severine is drawn towards him, his outsider status a natural edge to an already forbidden liason. The tangled web eventually has dire consequences as Husson discovers her secret, causing ‘Belle’ to cease working. Marcel becomes enraged, tracks her down to her home and guns down his rival Pierre.

Within this schematic Bunuel works his magic. He never frames the action from a judgemental or didactic point of view, giving us the information in dreams and clues. Severine acts out of compulsion, she was sexually abused as a child by an older man and must seek out forbidden forms of sex in order to feel ‘normal’. The key scene lasts only seconds, and judging by it’s scant mention in most reviews is not something widely admitted, most preferring to take the ‘bored housewife’ approach to viewing her actions. This, I feel, is a mistake and a male chauvinistic one at that. How can a woman who looks like she does, who would have had endless male attention growing up, including this life shattering event at such an impressionable age have a chance of easily coming to terms with sexual politics and impulses? She marries the ideal Dr Dreamboat, in an attempt to conform we assume, but finds it inexplicably difficult to achieve sexual intimacy with him, a square peg in a round hole? It’s obvious she loves him, but Bunuel gives us further clues that love does not always go hand in hand with sex, so to speak. (okay I’ll stop now!)

Severine takes a chance on coming to terms with her ‘defective’ sexual programming and, via the brothel encounters, starts to relax around Pierre and even meld their normal intimacies with sexual ones. Severine risks and suffers humiliation while exporing this ‘cure’, even if the men involved seem pathetic or ridiculous themselves. Of course the conservative condemnation arrives when Husson discovers her at the brothel and derides her actions as ‘having no class’, while never admitting the double standard of his own history with the establishment. Severines double life collides with her real one when Marcel, who seemingly encapsulates everything she was seeking in real sexual danger as well as a physical one, decides he must possess her exclusively. A beautiful woman is again reduced to a commodity in so many ways. Indeed one brief tantalising means of escape is hinted at in the relationship between ‘Belle’ and Madame Anais, her creator. Anais seems more than interested herself in Severine, and as Severine leaves it seems the overtures are about to be reciprocated, but Anais turns away leaving Belle to deal with the messy masculine imbroglio alone. Events leave Severine with the ‘perfect’ husband, physically and emotionally crippled, emasculated and unthreatening. In the ultimate revenge for the travails she’s suffered at their hands, men are rendered impotent as she is left with her private fantasy life to constuct any way she desires.

So no easy answers await the viewer here, Bunuel contructs an atmosphere of unnerving semi-reality and stands back, letting the action take over. The set ups and style are never forced or imposed. It’s enough to provide some explosive and disturbing results. The ensemble work is terrific but the centrepiece is the impossibly gorgeous La Deneuve, her exquisite porcelain beauty is used to magnificent effect and her performance hits the right notes of calm terror. Bunuel made this in the heart of the liberated Sixties and still managed to cause a scandal. It disappeared from circulation for many years, resurfacing in the 90’s and it’s critical reputation continues to grow. One can imagine ice blonde obsessive Hitchcock getting a hard on (pardon my French) when seeing this!  Indeed I’d guess it influenced ‘Frenzy’, his essay on perversion a couple of years later, in the new directness that could be put on screen. Bunuel reveals here that explicitness is not necessarily about nakedness, and the gratuity that’s been unleashed since has not been particularly insightful or edifying. In this realm, ideas are still king. 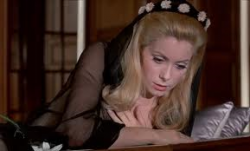 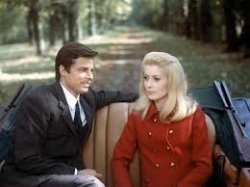 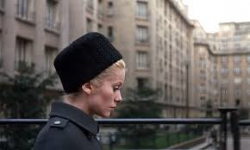 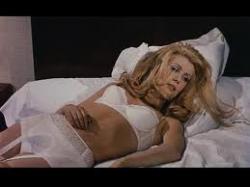 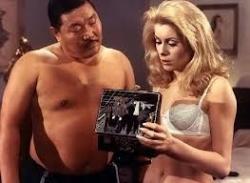