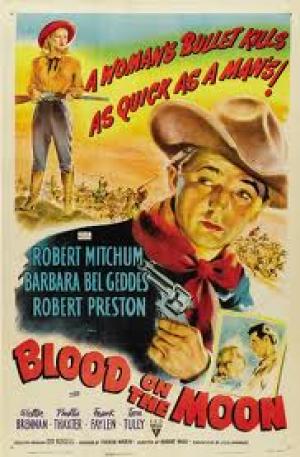 Blood on the Moon

Robert Wise, along with Anthony Mann and Henry Hathaway, may have claims to be pissed off with the French critics who lauded Howard Hawks as an auteur but neglected this trio as mere studio craftsman and despite admiring the odd film relegated them to the level of footnotes. Wise's career path may have been different, but his results were Hawksian to a tee, significant mastery of several forms of film across a couple of decades with a legacy of classic films in most genres. Blood on the Moon  is his best western and first A feature, coming on the back of many years working as an editor at RKO, before directing some low budget B horror pictures for Val Lewton's unit. RKO's up and coming star Robert Mitchum, who was to fight a drug conviction in the same year, which led to prison time, but also saw RKO stick by him and save his burgeoning career.

This was Robert Wise's first A budget feature and he had the good sense to employ the talents on veteran cinematographer Nicolas Musuraca and composer Roy Webb, both alumni of Lewton's horror unit, and both consistent master craftsman, Musuraca shooting what is arguably the first film noir in Stranger on the Third Floor  in 1940, and setting the visual noir high water mark with Out Of The Past  in 1947. Visually Blood on the Moon  is a dark edged and shadowy western, full of atmosphere and style, the antithesis the usual Hollywood cowboy concoction.

Wise opens with a wet and stormy night and a lone rider out on the prairie, it's Jim Garry (Mitchum) a cowboy drifter off to take up a job with old pal Tate Riling (Robert Preston). He pitches camp for the night but is immediately over-run by stampeding cattle, the owner of which John Lufton (Tom Tully) offers him an apology, shelter for the night and a job. It's clear Jim has ridden into a range war between farmers and cattlemen, and he's not aware of the full scale of hostilities, nor what it is he'll be doing for his friend. rejecting the Tully offer, but denying he's off to meet Riling, he gets shot at by Tully's head-strong daughter Amy (Barbara Bel Geddes) and has to subdue her in order to deliver a hand written note from Tully to his wife. Riling meets Jim and informs him of his plan to cheat Tully out of his cattle by using a corrupt government official who controls the contract Tully works under, Jim is to be his gun muscle in case of trouble. Jim is uneasy about being hired for his gun, but is in no position to be choosey. Riling has seduced Tully's other daughter Carol (Phylis Thaxter) in order to get information as to where the herd is grazing, and given the note had a false location as a ruse Tully knows someone close to him has sold him out, even though the suspect is Jim, who claims to not have read the note.

The farmers and smaller ranchers are united with Riling in opposing Tully, falling for his scheme to free up the range, but unaware of his corrupt and underhand methods. One of the ranchers, Barden (Walter Brennan) loses his son as a result of a night stampede to scatter Tullys herd, and Jim sees up close the consequences of Rilings duplicity. Deciding he'd been duped by his friend Jim switches sides, the fist fight between him and Riling is a classic and Barden assists Jim in escaping to Tully's camp. Jim kidnaps the corrupt government agent to stall proceedings and falls for Amy in the process of helping the cattlemen. Riling and his thugs surround Barden, Amy and a wounded Jim and the final shootout takes place.

What makes Blood on the Moon  so enjoyable all these years later is the glorious simplicity of a good script, fine actors and excellent craftsmen all operating at a high level. The look of the film is pure 'western noir', with some shots that would surely have made Ford envious. Mitchum is just right as the protagonist who has a moral choice to make, and when the chips are down he makes it. Preston is superb as the grimy, scheming Riling, playing against type and doing it brilliantly, his betrayals and manipulations bring an extra dimension to what might have been a standard 'horse opera'. It deserves a place alongside other offbeat western classics like Fritz Lang's Rancho Notorious  and Nicholas Ray's Johnny Guitar, at least the equal of the similarly visually muted The Furies,  from Henry Hathaway.

The writing brings out some themes that would not have endeared them to HUAC at the time, Brennans character says at one point "I joined up with other small ranchers cause I figured their fight was my fight".  Such sentiments seem a tad socialist for the right wing witch-hunter's, but what probably balanced the ledger was that the cattle baron was a decent and tolerant man, who was as much as victim of foul play as anyone. Ultimately it's a solid western where a drifter has to make a stand, to find his true self through his actions, and to redeem a wrong he's otherwise caused.

Wise pulls all the elements together in a way where the whole is more than the sum of it's parts. like all great films it reaches a kind of alchemist symbiosis, no small achievement for any film considering the many parts that have to cohere and the many contributors involved. That Robert Wise could produce such fine results so consistently is remarkable, if he'd not done it so quietly at RKO or so modestly his reputation may be greater than it is.  Wise continued to make modest and engaging cinema within the confines of the studio system, and even had his biggest hit with the sugary The Sound of Music ,  for which he won his second Best Director Oscar late in his career. 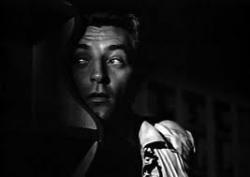 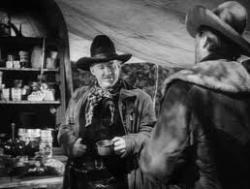 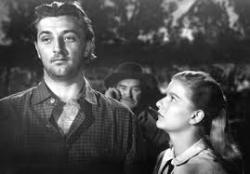 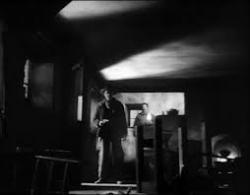 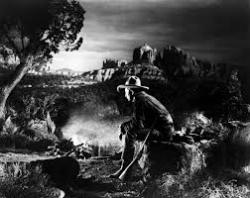