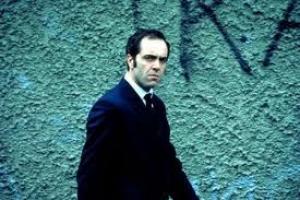 'Bloody Sunday is the story the Irish can never forget and the British don't want to remember.'
~ Jim Sheridan

By 2001 English writer-director Paul Greengrass had mostly specialised in military or crime features, and mostly for TV, but with Bloody Sunday  he started to make headway in the world of cinema with a film that finally represented the full flowering of his mise en scène.  He faithfully adapted Dan Mullan’s Eyewitness Bloody Sunday, a compelling set of first hand accounts of the tragic day in 1972 when 13 innocent people, engaging in a peaceful protest, were gun downed by the British Army in the town of Derry. The narrative spans a mere 24 hour period and focuses on real life key players, but the wider resonance of the ‘troubles’ and sense of context is undeniable and a tribute to the writer’s skill.

Ivan Cooper (James Nesbitt) is a Protestant politician in Derry, a town in Northern Ireland at the forefront of the ‘troubles’, the conflict between the mostly Catholic Republican Irish and their Protestant British rulers. Cooper belongs to the Socialist oriented party the SDLP, and is also and organiser for the Civil Rights Association (CRA) and in that capacity he organises a march to protest “mass internment without trial”,  a recent policy brought in to battle the influence of ‘hooligans’ and elements of the IRA. Coper frames the march as a “civil rights for all”  action, and tells everyone it is to be a peaceful march, a “Sunday afternoon stroll”.  Cooper pressures the IRA to keep clear, and they agree to hold their arms at least, knowing the Brits may bring in the Army for support. The march proceeds and all is normal, including some typical skirmishing that brings on water cannon and tear gas in retaliation, but then gun shots escalate the situation and it spills over into a chaotic massacre.

The pre march set up follows the actions of the Army and of the commander in charge who called in the 1st Paratrooper division, Major General Robert Ford (Tim Pigott-Smith). Ford tells the officers who will be on the ground, “The PM has had enough…. We’re going to have to be tough today”.  The Army is under no illusion it’s the Derry Young Hooligans they are to target, to round them up, “in the bag”,  is the officer's order, as if they were hunting pheasant. The soldiers on the ground have open contempt for the rules of engagement and scant regard for orders of the day, as one voices it, “Where are our civil rights”?   This needs to be read against the backdrop of more than 40 soldiers dead at the hands of the IRA since the interment policy was implemented, so the ground was sown with understandable nerves and a  deep seated desire to get one back on the troublemakers.

Cooper knows his movement needs the march, “If we don’t march the movement is dead”,  and proceeds against some advice.  The march sets off with 1 Para positioned behind a wall, with firm orders not to engage, but after the hooligans join the march the level of tension ramps up. Cooper leads the marchers away from a barricaded road that blocks the initial destination of Guildford Hall, but some hooligans rush the barricade and start to taunt the soldiers. The soldiers employ water cannon and eventually tear gas at this point, but the main body of the marchers are led away from here and are listening to Cooper and another MP, Bernadette Devlin, deliver civil rights themed speeches. Shots soon ring out and all the marchers are running for their lives in the chaos, as 1 Para has been mobilised (against orders) and the soldiers are shooting at anything that moves.

Greengrass employs a supremely effective ‘mosaic’ method of filmmaking for Bloody Sunday,  incrementally building his narrative and jumping between locations and characters with seamless fluidity. The technique recalls Altman’s multi-strand approach, but mostly lines up with the more neutral, or dispassionate European fragmented cinema of Michael Haneke, especially his definitive early work,  71 Fragments of a Chronology of Chance.  The use of handheld camera and quick cross-cutting has the overall effect of immersing the viewer in the centre of the action, as if a documentary is being made at the time of the events. Greengrass patiently builds the action as if assembling a giant puzzle, and painstakingly recreates several iconic images from the day, given the amount of press coverage that occurred at the event, in particular the image of the priest helping carry out an injured man while waving a white, blood stained handkerchief.

The piece works at an even deeper level than documentary recreation because of the astonishing central portrayal of Cooper by James Nesbitt. It is one of the finest sustained performances in recent British cinema, and humanises and anchors the film, giving it an added emotional punch. Tim Pigott-Smith is very good as the plummy Ford, an ice cold bureaucrat who is running a dashed good show as a good soldier of the Queen should, and Pigott-Smith’s ability to convey a clinician’s detachment captures a disturbing tone. Greengrass does an astonishing job with the crowd scenes, creating such an authentic canvas it’s impossible not to be engaged. The politics as well as the humanity is well delineated, including the messy fragmenting of the IRA into the provisional and official wings. The Provo’s stood back, “marching’s not gonna solve anything”,  and ironically reaped a flood of recruits following the tragic events.

The aftermath is devastatingly realised by Nesbitt and the excellent ensemble cast, as the shocked marchers count the bodies and the officers search for plausible explanations to cover their actions, “we need some weapons”,  one says, as reports filter back that the targets were unarmed. No weapons are ever found. Greengrass includes the disputed act that soldiers planted nail bombs on a dead suspect. The Widgery Tribunal reported after a mere 10 weeks and exonerated the soldiers, even though one Paratrooper gave evidence at the Tribunal and testified that they were told by an officer to expect a gunfight and "We want some kills".  Ford denied there was a policy to shoot outside of ‘self defence’, but in a secret memo to his superior, dated 7 January 1972, Ford said he was "coming to the conclusion that the minimum force necessary to achieve a restoration of law and order is to shoot selected ringleaders amongst the DYH (Derry Young Hooligans), after clear warnings have been issued".  Cooper sums it up at a press conference, “This was our Sharpeville, you have destroyed the civil rights movement, and given the IRA a huge victory”.  Cooper's role is also ironic as he was a Protestant man, agitating for peace with mostly Catholic marchers, and he was courting a Catholic girl.

Dan Mullan’s 1997 book proved pivotal in pressuring the British government into opening up a second Inquiry into the events, as the first hastily put together examination in 1972 was widely discredited. Tony Blair commissioned Lord Saville to look into Bloody Sunday in 1998; the Inquiry sat for 6 years hearing evidence and took a further 5 years to deliver its verdict, the longest running and most expensive legal investigation n British history. Greengrass posted the list of casualties and the fact that no soldiers were brought to book for their part in the tragedy. Since then the Saville Inquiry findings were brought down in 2010 and they were scathing as regarded the military’s action on the day. The Saville findings were that the soldiers “lost control”, shooting at “civilians who did not pose any threat”. As yet no prosecutions have resulted but its findings evinced an apology in Parliament from Prime Minister David Cameron.

Paul Greengrass wrote a kind of companion piece on the 'troubles' soon after, Omagh,  filmed by Pete Travis in 2004, about an IRA bombing in 1998, 7 months after Blair established the Inquiry. Greengrass then went on the direct the second of the Bourne  films with The Bourne Supremacy,  establishing his credentials as a big budget director, and also doing the third in the franchise. Paul Greengrass utilised his faux-documentary ‘mosaic’ style again with the gut wrenching and compelling United 93,  his forensic unpacking of the drama surrounding the plane that failed to make its target on 9/11, because the passengers fought back against the terrorists. Bloody Sunday  shows the origins of that technique and methodology, and stands up beautifully against that Greengrass masterpiece, a less widely known film perhaps, but every inch its equal. 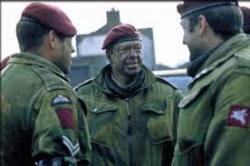 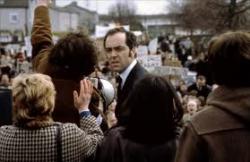 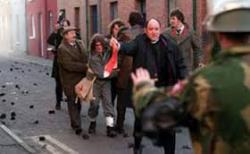