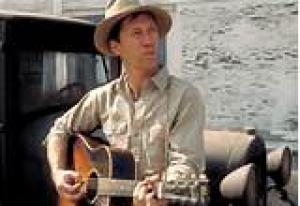 This man is your man

"As I went walking I saw a sign there
And on the sign it said "No Trespassing."
But on the other side it didn't say nothing,
That side was made for you and me."
~ This Land is Your Land (Woody Guthrie) - *this verse is often omitted from some versions

Hal Ashby is one of the under-rated figures from the American Renaissance era of the late ‘60s and ‘70s, and Bound for Glory,  his Woody Guthrie biopic, is one of his quiet masterpieces. The book is loosely based on Guthrie’s witty and engaging autobiography of the same name, but it (like the book) flirts with the truth in favour of a quasi-impressionistic telling of a short period in Guthrie’s life. The major problem with filming the book was finding the right lead, and every leading American actor of the time was sought out, including Dustin Hoffman, Al Pacino, Robert De Niro and even Jack Nicholson, before the unlikely star of TV’s Kung Fu series was signed. David Carradine had an impeccable Hollywood bloodline, his father John being a member of John Ford’s stock company for many years, and David brought a quiet inner strength to the role that suited Ashby’s downbeat and languorous approach.

Woody Guthrie (David Carradine) is a knock about labourer in a small Texas town with a wife and two small children that he struggles to support. Woody turns his hand to sign painting, faith healing, even fortune telling, but can’t bring in a living in the Great Depression ravaged area. The town is also reeling from the dust bowl phenomenon, and after a massive dust storm covers their home Woody sneaks off and heads to California. Riding the rails he meets other workers heading west hoping to find a living in the fruit and vegetable growing fields of the almost mythic Promised Land. Woody sides with the workers against the exploitative bosses and teams up with Ozark Bule (Ronny Cox), a singing Union organiser, taking to the fields with his guitar and his songs. Woody gains a following and a spot on a local radio show, allowing him to bring his wife and kids to California.

The key to the film’s artistic success is in the artistic boldness and scope of Ashby’s vision, aided by a brilliant cinematographer in Haskell Wexler. The pair had worked together for director Norman Jewison on his classic In The Heat of the Night,  Ashby editing and Wexler shooting that gritty crime drama, before Jewison encouraged and helped Ashby graduate to directing. Wexler had an impressive resume in filming documentaries and it’s this quality that helps in the naturalistic quality of Bound for Glory.  Wexler also used the first Steadycam shot in features, a stunning and fluid sequence where Woody wades into a large crowd, reminiscent of the stunning workers camp shots in John Ford’s The Grapes of Wrath.  Ashby certainly owes a debt to Ford’s masterpiece, and Robert Getchell’s adaptation imitates its structure almost beat for beat, a reaffirmation of Woody’s identification with John Steinbeck’s immortal characters - Woody having in fact written the songs Tom Joad Parts 1 and 2 in 1940.  David Carradine provides an appropriate link to Ford’s masterpiece as his father John played the key role of Joad’s friend, Jim Casey, in the 1940 classic.

The thing that elevates Bound for Glory to another level outside of the documentary approach is the almost mystical overlay in tone and feel. Wexler won the Academy Award for his gorgeous cinematography, its richness anticipating the rapturous feel he would again find for Terrence Malick’s superb Days of Heaven  a couple of years later. David Carradine’s measured performance chimes in perfectly with the overall mystical bent, giving his Woody an other-worldly calm, evidenced by an early scene where Woody seems to intuitively know a lot about a stranger who pulls up for gas. If Ashby had played it straight then Carradine might have struggled, and in another universe one wonders what a Bruce Dern, Warren Oates or a Harry Dean Stanton might have brought to the role, but Ashby eschews realism in order to find the poetry of everyday life. Indeed the film might have been very different if singer Tim Buckley, the original actor Ashby cast, had lived to play the part.

Ashby focuses on a mere 4 year period of Guthrie’s life, from 1936 to 1940, and subtlety incorporates the social context in Depression era America. Just as Steinbeck’s book was aimed at the bankers and stock market cowboy’s that brought about the crash of 1929 and the subsequent financial chaos that engulfed the globe (2008 anyone?), Ashby shows the fallout on ordinary people and doesn’t shy away from highlighting the divide between rich and poor. Rather than deliver a polemic that preaches from the socialist hymnbook, Ashby slyly contrasts the compassion of Woody’s society mistress (asked by Woody “Do you get embarrassed that you have so much”?)  and the earthy connection of the camp workers who have so little. Woody’s journey echoes Tom Joad’s in as much as he serves as the stand-in for the audience, learning the humiliations and inequities the migrant workers encounter on a daily basis.

Woody is spurred into action by the injustice he perceives, and yet Ashby does not overplay the iconic songs that flow from Woody’s guitar as a result. The soundtrack incorporates many of Woody’s best known tunes, but the film really points out how the songs Woody and Bob played and sang to the workers served as perfect message- delivery devices for their ‘strength in numbers’ socialism call to arms. Modern America’s lack of understanding of Socialism may stem from this period, where Roosevelt’s far-sighted New Deal programme was routinely condemned as socialist or even communist by the denizens of the far right. In truth the integrity and vision FDR brought to the office probably saved the US from slipping down the same fascist path that most of Europe took to in the ‘30s. Woody always claimed that by siding with the poor he was merely following Christian values, and his song Jesus Christ cast the mythic saviour as a social outlaw, “To own everything in common, that’s the Christian way, pure old Commonism”.

Hal Ashby avoids the standard biopic traps of sentiment and hagiography and delivers a film that is as much arty tone poem as Hollywood entertainment. Ashby was in the strongest position of his career coming to work on Bound for Glory,  having enjoyed a succession of commercial hits (The Last Detail, Shampoo),  and as such was able to make a different kind of film than the mainstream usually produced. The deliberate slow pace approximates a European art film and the quiet humanism recalls the best of Kurosawa or Bergman. Carradine’s rendering of Guthrie as an earthy mystic, imbuing him with a deep humanism and compassion while not shying away from the flaws the real man had, is memorable and credible, and Woody here is seen as a man full of contradictions but dong the best he can to remind people of the universal traits that bind us, rather than the superficial that divide. Bound For Glory  is a small miracle of a film, one that serves as a stunning reminder of what Hal Ashby had to offer when the planets aligned in his favour. 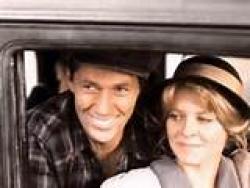 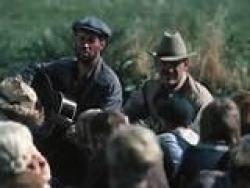 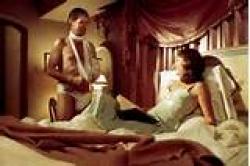 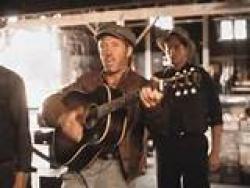 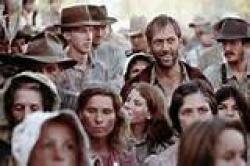