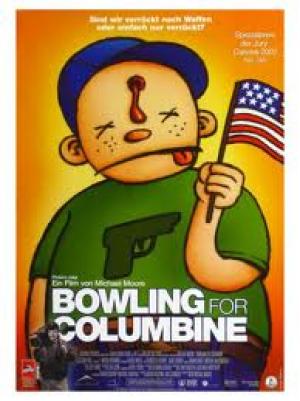 * Bowling for Roseburg
~ added as a preamble to thoughts on Bowling for Columbine after the events of October 2015.
Looking back on my thoughts on Columbine, written the day after Sandy Hook, I can see my anger, I've provided a link below to a pieceI wrote after Charleston, and now I'm just sad.

The amount of mass killings in the USA and the regularity with which they happen sadly means the name of the school or institution will change, the issues will not. This month it’s Roseburg in Oregon, last month it was Charleston, and the next time? President Obama continues the Sisyphusian task of convincing grieving Americans to move towards some solutions that could help mitigate the problem, but even Sandy Hook, that most horrible of tragedies that shook the whole world, couldn’t shift the debate. Where to now?

The debate must grow - Obama said after Newtown that ordinary decent Americans need to organise to take on the powerful gun lobby, who control the votes in congress with a mix of money and fear. Congressman fear the Gun Lobby money (supplied largely by weapon manufacturers) will unseat them if they do not toe the pro-gun line. It is the same impetus the arms manufactures use in keeping the nation fearful and over-armed. It is no surprise that money and profit are at the heart of their agenda. The amount of guns is not the issue, as Obama said there are plenty of guns to go around currently. The ‘freedom to bear arms’ furphy is just that, a tired and cynical use of hiding behind a muscular nationalism and bleating about the constitution when all along it’s about money.

America has a problem with race that has exacerbated the problem, and an issue with the health care system that fails mentally ill people on a regular basis. The difference in comparable countries is that the Roseberg shooter, obviously unwell and deluded, would not be able to purchase and arm himself with 13 guns! Matters of religion or hate crimes also complicates the issue, as does the appalling right wing agenda to demonise Obama for politicising the problem, but other dimensions trump those of faith and a perverse ‘right’ to bigotry. The right to live free of the fear of being shot is a political issue because any government is duty bound to provide the safest environment for its citizens to go about the normal lives.

As a concerned citizen of the world, a world that grieves with our American brothers and sisters whenever the media brings us news of the latest tragedy, I would implore every thinking American to ponder what is it that makes the gun issue so different in their country? After all, Americans are not so different to the rest of us, we all have the problems that a modern society produces – isolationism of the disenfranchised, a rampant disconnection where the common wealth only runs into the hands of the 1%, and a political system driven by cheap tactics of fear and division. To rise above this Americans need to get in touch with the better angels of their nature and apply the same energy that makes them great in many other areas.

After Charleston I wrote this piece in my songwriting column, please read it and join the hashtag #melttheguns  to support reason and change. A classic definition of insanity is to keep doing the same thing and expect a different outcome.

"If more guns made people safer America would be one of the safest countries in the world, it's the opposite" - Un-named Canadian man in Bowling for Columbine

I hadn't anticipated getting to write up my favourite Documentary features on the site for some time, but after the events of today, when another senseless and horrific gun crime took the life of 20 young schoolchildren is a sleepy Connecticut town, I had to write something. Absorbing all the bullshit news footage, the half-assed media attempts to maintain an information flow (where there was none), the skyward sent prayers to an invisible friend and hearing the usual lame theories and surprise as to how could it have possibly happened again, a sane person must ask, "why are you surprised"?  I re-visited the seminal Michael Moore documentary from 2002 to see what had changed in the last 10 years. Short answer, nothing.... longer answer below.

Moore's approach to examining an issue is to get the voices of ordinary Americans to speak, to look at the arguments and to pull back the curtain of any agenda working behind the scenes. He starts Bowling For Columbine  with a trip to a local bank branch that is offering a free gun with every new account. It's this nexus between 'normal' community behaviour and it's relationship to gun ownership that takes up the narrative. The tragedy in Columbine in 1999 serves as the fulcrum from which to attach the larger question, "Why do Americans kill each other with guns in such large numbers"?  Moore throws the institutionalised violence of U.S foreign policy into the mix, as well as the industrial military complex and the world's largest weapons manufacturer, who happened to be located in the same town where the massacre happened. He contrasts several comparable countries and their records with gun deaths across a similar period. The results were;

America's media appear complicit in selling fear in order to promote consumption, either of their product, or of 'security' industry products. A reality TV producer notes that "Anger, hate, violence rates well, tolerance and reason not so well",  in an industry whose news ethos is "if it bleeds, it leads".  A culture of fear creates an unreasonable and easily manipulated population, it has worked well throughout history for various megalomaniacs and it works just as well in a capitalist democracy. Gun sales went up 70% following 9/11, despite the fact guns in the home are unlikely to be useful against foreign terrorists.

Moore uses his usual stunts to create a tension or drama, like taking two gunshot victims from Columbine to Kmart to return the bullets, but still backs up his attention getting methodology with facts. The sight of 'Moses', NRA president Charlton Heston, inviting him in and then looking like a deer in the crosshairs as the questioning starts to veer into areas of discomfort is priceless and effective.

After the sad events at Sandy Hook today, one hopes the penny will finally drop for our American cousins. The nub of the argument is access to guns equals more deaths. It's self evident to anyone who cares to examine the facts. America has swallowed the industry lie that gun ownership is tied up with Constitutional rights, which is patent nonsense. The Constitution was concerned about the ability to maintain a well-armed militia given they'd just won independence from Great Britain, and ideas about keeping and maintaining a Federal standing army were yet to be codified, so the citizens were kept armed in case they needed to be conscripted. In a modern era with instant communication and food sourced from shopping malls, the imperatives that made gun ownership in 1789 a good idea simply are not applicable. If patriotism is the last refuge of the scoundrel then hiding behind the Constitution (formulated as Heston said by "wise old dead white guys") to be able to claim ownership of semi-automatic weapons for 'normal' use is cowardice in the extreme.

Fox News excelled itself on this tragic day, quelle surprise,  Bill O'Reilly bringing up Nazi "concentration camps"  as examples of comparable evil, Mike Huckabee blaming it on "the removal of god from schools", and conservative nut job contributor Ann Coulter managed to tweet, "allowing more people to carry concealed weapons effectively cut the murder rate".  To them I say;

- Bill, it's not rocket science, events have causes, look at the roots and this one will be no different, however 'evil' it rates on your Hitler scale. The Holocaust was the extreme result of hundreds of years of racism and bigotry by Christians directed at Jews, intersecting with a nation believing itself collectively emasculated in the WWI treaty and falling for the poisonous rhetoric and ethnic cleansing solution that the fascists offered.

- Mike, you can't have it both ways, if your God is the biggest and most powerful force in the universe (and I'm reliably informed by Evangelical friends that is the case) then your God must have willed it. The Priest at the memorial service noted, "There are 20 more saints in heaven",  I would ask, "Why didn't your God stop it"?  Let's hope the grieving parents and families find comfort where they can, but love and care from a real human is infinitely more preferable to the version available from the silent heavens.  FYI, The Norway mass murderer was doing his bit to fight for Christianity against the Muslims and Hitler was raised a Catholic who said he was "doing God's work".  It wasn't lack of "god", it will be something more manageable I'll wager, like lack of mental health care in the perpetrators life.

In my home state of Tasmania in 1994, at Port Arthur, a place that had seen untold suffering already as a convict prison site, we had a mass shooting with an even greater body count, a staggering 35 dead and 23 wounded. Australia has had very few mass shootings of this kind in modern history, and this shocked the nation fundamentally and led to a review of gun laws, a buy back by the government of semi-automatic weapons and a change in legislation of gun ownership. The perpetrator was a quiet young man, from the Hobart suburb of (spookily enough) Newtown, with a history of isolation and sociopathic tenancies and mental problems. It's a typical profile (Bill, are you listening?) of a young man who lacks empathy and sympathy and needs help to address problems that, if left to fester, can produce violence. Depression and mental illness is treatable, and if the case is too extreme then options remain available to lock individuals away for their own and for our protection. Anyone who's spent time on the streets of San Francisco and other large American cities recently will be able to testify to the lack of support for people with mental illness.

Americans are a fantastic people, and I remain convinced of their innate decency and good intentions. I can't believe they will continue to allow the bullies of the NRA lobby, and their cronies, to continue to drive the policy and cower the politicians. My family and I drove through Connecticut in the middle of this year, not far from Newtown, it's a beautiful and charming part of the world, and deserves better than a half-assed response that can't honour the memory of their dead children by crafting some better gun laws and getting those obscene semi-automatic weapons out of the community.

* Michigan republicans just passed a law within the last 24 hours to allow concealed guns to be carried into schools, churches and day care centres! Beam me up.