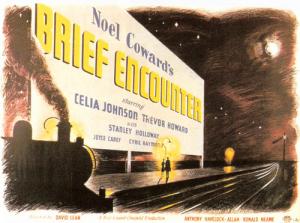 'My distinguishing talent is the ability to put people under the microscope, perhaps to go one or two layers farther down than some other directors.'
~ David Lean

Brief Encounter represents a kind of lyrical realism, a very British variation on the more earthly Italian or poetic French variants. David Lean, in his 4th collaboration with Uber-brit Noel Coward, brings an elegance and spareness that elevates this melodrama at every level. Lean was known as a gun editor and his eye is unfailing and clear in the choices he makes in Brief Encounter. It is a mark of a high degree of skill that he could make an intimate drama like this or This Happy Breed, again with Coward,and then go on to grand scale epics like Lawrence Of Arabia or Dr Zhivago and be equally as brilliant. Brief Encounter, though not a ‘war’ film, needs to be seen through the prism of a Britain drained by over 5 years of armed conflict, and even though it never makes any direct references to the struggle, the background tension it created is part of the fabric of the time and of the psychological drivers of the protagonists.

The simple set up is a chance meeting in a railway station, the impermanence of war-time amplified by having most of the action occur in this place of perpetual transience. Laura (Celia Johnson) has some grit in her eye and Alec (Trevor Howard), is a doctor who comes to her aid. Lean gives us this event through flashback, after it’s established the relationship is ending. Coward brilliantly has the tender parting scene ruined by a nosy acquaintance of Laura’s who is of course blissfully oblivious to the interference, no amourous continental goodbye scene for these two. As Laura mentally unravels on the trip home, and in her evening chair with her husband we get the full import of the affair and of the emotional precipice on which she’s been for some time. Husband Fred (Cyril Raymond) is the straight-laced, dependable type, not exactly intuitive about his wife’s suffering, but not unsympathetic either, and he makes an attempt to comfort her while she’s churning through events and the choices she’s made.

The series of events that lead to the two falling in love are delicately played by the leads, a chance meeting, followed by a co-incidental lunch, followed by an innocent invitation to the ‘pictures’, all devoid of any level of sexual by-play. And yet this is the reason why the release of the build up of feeling is so powerful, small gestures have a world of meaning, and eyes and words are almost used as code, as lover’s lurch hopefully into the unspoken unknown. Of course much of the impact has been lost in the intervening 60 plus years to generations on this side of the sexual revolution of the 1960s but to adults of the time so much was tacit, adding a level of poignancy to these exchanges. Of course these are the mores of the middle classes, and Coward contrasts their approach with the sub-plot of the station romance between a lower class couple, a guard Godby, played by the irrepressible Stanley Holloway, and the faux-prim cafe proprietor Myrtle (Joyce Carey), which is delivered with earthy good humour.

Coward and Lean use music to underscore their points at every turn, both visual and linguistic, notably a Rachmaninoff piano concerto which is archly romantic and poignant when set against the life of quiet desperation that Laura is living. A tea room orchestra provides some light relief and the beautiful WW1 era love song Let The Great Big World Keep Turning gets a quick run. The situations are handled deftly, as Laura reflects that ‘violent’ acts like falling in love shouldn’t happen to ordinary people like them. Guilt builds, as the lover’s confess their feelings for each other, and when her son has an accident and she’s not there to help she reads it as ‘punishment’ for her behaviour. The fantasy of a life together is a mere daydream reflected in the train window, the reality is the lie reflected in Laura’s mirror as she deceives her husband for the first time.

Laura and Alec get more deeply entwined, all the while aware that convention and society are not on their side, and that to cast off their respective families and throw in their lot together would be a decision on a seismic scale, in 1945 it’s just not done. The war may have created a background of living with an uncertain future, and of making accommodations that would not otherwise have been appropriate, and this has let Laura and Alec be bolder than they may otherwise have been in progressing the affair, to in effect be different people for a time. The realisation dawns with both that the love they share cannot survive, a separate future must be found, The film is ultimately about people doing their duty, just as the soldiers had done for their country in time of war, people had a duty to society to conform to its conventions, and without those conventions anarchy prevails. Laura comes back to Fred, from a place he thinks of as ‘very far away’, but in fact closer than he realised, a place in her own heart that could not be known to him. The idea of personal self sacrifice may be a quaint one now, with 21st century instant gratification everywhere, but it is at the core of this beautiful and delicate film.

David Lean continued with smaller, personal films for another decade before embracing the possibilities of painting on a bigger canvas. The move in the 1950s, by producers pushing toward 'international' productions rather than more local projects, allowed Lean to take on films of an epic scale, something he proved adept at realising with great films like Bridge On The River Kwai and Lawrence of Arabia. Lean's cinematic style was malleable enough to work on the bigger scale, but at heart he was still a storyteller, interested in human and universal situations. Brief Encounter may be the pinnacle of his smaller scale films, and remains potent and engaging cinema, an atmospheric masterwork where all the components are in true harmony from the gorgeous cinematography by Australian Robert Krasker, to the beautifully judged performances, a true classic. 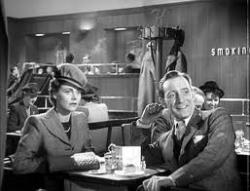 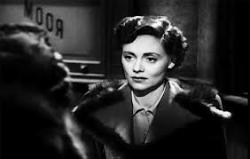 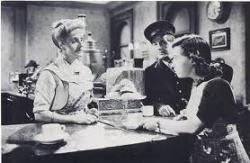 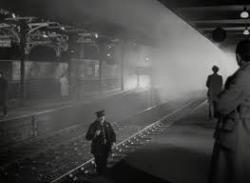