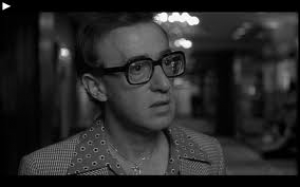 'Broadway Danny Rose' came in the middle of a particularly hot streak from Woody Allen, and it represents a heartfelt valentine to his showbiz roots. Allen had morphed from a nebbish Stand Up comedian in the late 50’s and early ‘60’s into a successful writer, playwright, and then film writer/director/star. In the mid ‘70’s Allen hit his commercial and artistic stride with 'Annie Hall', and rode the impetus from that creative wave well into the mid ‘80’s, producing idiosyncratic gems like ‘Purple Rose of Cairo’ and ‘Zelig’. During this period Woody devised a clever and demanding system of producing his low-ish budget films, and had carte blanche project approval from his financiers as long as his films came in below $8m, so typically he would have one film in pre-production, one filming and another in post production! It is a minor miracle he was able to maintain such a high standard for so long under those circumstances, but any visit to his golden age output is one full of the joyous rediscovery of an arch observer, (much more than a comedian) at the top of his game.

Danny Rose (Woody Allen) is a showbiz joke, a punch-line for several nightclub performers who tell 'Danny rose' stories during their regular lunches in a New York's Carnegie Deli. One of them tells the ultimate Danny Rose story, involving the comeback of cheesy Italian crooner Lou Canova (Nick Apollo Forte) and his mistress Tina (Mia Farrow). Lou has a shot at the big time again, via an appearance with Milton Berle, and is anxious that his girlfriend should attend the show, but Lou needs Danny to be Tina's 'beard', as Lou's wife will also be at the show. Danny meets Tina but becomes embroiled in a spat she has with a gangster former boyfriend and his family, and as Danny is presumed to be Tina's lover, a hit is placed on Danny. Danny attempts to stay alive as he delivers Tina to the show, and in the process, the two get to know each other.

Woody is on sure territory in examining the types and mores of New York's show business denizens, and the film exudes authenticity at every beat. Danny embodies the dreamy-eyed, fringe try-hard's, forever fixated on the big break, the opportunity to achieve fame and fortune. Danny has a roster of acts in which he believes implicitly, encouraging and nurturing them at every stage, including a one-legged tap dancer, blind xylophone player and a balloon figure act, "open with the dachshund, close with the giraffe". Danny applies his Uncle's philosophy, "acceptance, forgiveness, love" to his dealings with people, falling seamlessly into the schmoozing patter of the nightclub entertainer at the drop of a hat, "What star sign are you darling"? Danny is a sweet nobody, and if fame does come knocking for any of his acts they invariably leave him for representation of a more cutthroat type.

Tina is a hard case, and believes in the law of the jungle, a philosophy that appals Danny. Tina's edge and moxie, brilliantly encapsulated in a startling performance from Mia Farrow, is balanced by her insecurity, as indicated by her seeking out of a fortuneteller to reveal her fate. Farrow finds real rawness and grit for Tina, not something usually associated with the fey and delicate actress, as she pushes herself in one of her most under-rated characterisations, blonde wig and pneumatic chest to boot. Farrow and Allen were a couple at the time and continued to be so until the early 1990's and the very public scandal of Woody becoming romantically involved with one of his (adult) step-children! Allen plays Danny as he plays most of his roles, as a version of himself, both a parody of the showbiz type, and a sincere homage. Even so, Woody is a remarkable and effortless performer, something often overlooked because he makes it look so easy, just like his idol and role model, Bob Hope.

Woody manages to get in several trademark comic riffs and jabs, particularly in the Carnegie Deli scenes where the comics rib each other about stealing jokes (it was ever thus) and trying to crack each other up with routines, "my Picasso cubist period". The nightclub scenes are a delight, the detail of the swooning middle-aged women in the audience, dreamily eyeing the flabby crooner and accompanied by men who think this passes for sophistication are priceless. Woody is a master of undercutting pomposity and pretentiousness, and the show business world is a ripe target for such treatment. The heart of the film is the empathy and community Danny finds with his struggling acts, and the reality of this is what Tina responds to when she finally has a moment of self-awareness. Tina holds Danny's philosophy up to him like a mirror, "forgiveness, acceptance, love", the very things that he offers his acts, she offers him, and he chases after her to find her outside of Carnegie's Deli.

Woody maintained his high standards well into the 1990's, and hit a commercial peak in 1986 with 'Hannah and her Sisters', and still averages a reasonable hit rate into the 2010's, considering his prolific output. 'Broadway Danny Rose' is a small, sweet wonder, Allen's decision to film it in black and white has the effect of presenting it almost as an historic document, a time capsule for a fantastic time and place. The film itself never found a wide audience; a pity given it represents a significant artist in the middle of a hot streak. Taking a line from Danny, "might I just interject a concept at this juncture", find this film and watch it, you'll be grinning from start to finish. 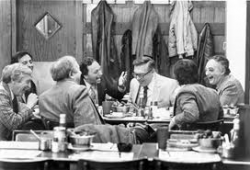 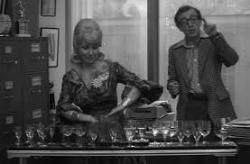 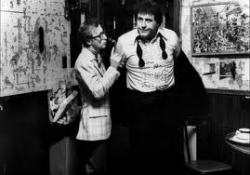