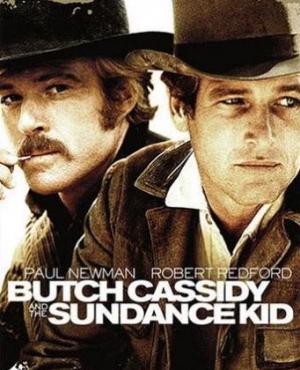 Butch Cassidy and the Sundance Kid

"Small price to pay for beauty"...

"...It's too late, you shoulda let yerselves get killed a long time ago while you had the chance...  I never met a soul more affable than you Butch, or faster than the Kid, but you're still nothin' but two-bit outlaws on the dodge. It's over, don't you get that?! Your times is over, and yer gonna die bloody and all you can do is choose where"
- Sheriff Bledsoe (Jeff Corey)

William Goldman researched Butch and Sundance over an extended period, and wrote a film that resonated with an America once again dealing with wrenching change. As with Butch and Sundance's dilemma, that of facing an uncertain future while feeling that the best of times were behind them, Goldman constructed a fable that spoke to contemporary audiences with delicacy and humour. Butch and Sundance's real gang, also called the Wild Bunch (dropped in favour of The Hole In The Wall Gang for obvious reasons) served as the model for the very first western hit, Edwin S. Porter's The Great Train Robbery,  which electrified audiences for 10 minutes in 1903. Goldman had worked with Newman before on Harper,  and had the actor in mind for the film, as well as (gasp) Jack Lemmon, but George Roy Hill came on board as director and had other ideas.  Hill made a contemporary western with a hint of nostalgia, both modern and aged at once, and consequently one much misunderstood at the time. Critics generally loathed it, but audiences loved it and word of mouth was huge, leading to it becoming one of the most successful westerns ever at the box office.

The history of cinema is littered with failed attempts to create the kind of magic at work in this film. The amount of variables amongst the constituent components in any feature film endeavour make the results on show here elusive and borderline miraculous. William Goldman was the start point, stumbling across the not-well-known story of Butch and Sundance, and using the key known points about them to fashion an entertainment for the cynical post modern eye. The script became one of the hottest properties in Hollywood's history, collecting Goldman the then unheard of sum of $400,000 and causing a minor scandal. George Roy Hill served to helm the project and marshalled the not insignificant talents of Paul Newman to star and Conrad Hall to shoot it. The part of Sundance was cast late, with both Warren Beatty and Steve McQueen in the frame. Newman and Hill fought for the unknown Redford, and helped create a major star in the process.

The narrative is really only a device to support the ode to friendship that Goldman has written. The fortuitous chemistry between the two leading men was so real and sincere it elevated the project from quirky western-lite satire, to a touching and engaging romp that said something meaningful about true friendship. In it’s own modest way it broke many rules about westerns, which in 1969 were increasingly out of favour with the public. There are no macho-bullshit shootouts, no murderous gang, the lawmen are not inept and bungling stereotypes, the soundtrack has no 88 piece Symphony bombast. Instead we have bicycles, Bolivians and a pop song. The bones of the tale have two outlaws who complement each other, one quick with a gun but none-too-bright, and the other scheming and sharp, but gun shy. The gang they run has a reputation for not shooting anyone, but robbing the train too often causes the owners to fund a Superposse of renowned lawmen, one commissioned to catch Butch and Sundance dead or alive. After an epic chase the friends decide discretion is the better part of valour and set out to lay low in Bolivia.

The film works so well because within that framework are several beautiful set pieces and many delightfully rendered vignettes that fit together seamlessly they create a whole greater than the sum of it’s parts. The blowing up of the train carriage, the cliff top jump, the Superposse chase, the bandit shootout and the iconic final battle are all classics of their kind, superbly staged and filmed. Equally the glue of the Hole-In-The-Wall sequences, the bike ride, the whorehouse scenes, the Bolivian bank holdups are the fine detail that counterpoint and sparkle with finesse. Every small part is convincingly delivered by brilliant character actors, able to manufacture a kind of authenticity via shorthand. The gang members have some lovely moments when their leaders return only to find a leadership challenge is brewing that requires some quick thinking on Butch’s part. The much put upon victim Harriman, guarding the train’s payload, is nicely played by George Furth, and blacklist victim Jeff Corey's 'oracle' speech is brilliantly delivered, but it is Strother Martin as the mining manager in Bolivia who steals the support honours.

The love interest is Sundance’s erstwhile girl, schoolmarm Etta Place, played by the beautiful Katherine Ross. In what almost amounts to a love triangle there is an easy arrangement between Butch and Sundance where their friendship is not threatened by where her affections are directed. This is one of the more unusual elements in the film, undermining the conventional device of jealousy and envy that leads to conflict whenever two males vie for the attention of one woman. Goldman is suggesting it is real love that the two men share that enables them to put aside these territorial considerations, and indeed in the end they stick with each other when Etta can no longer take the strain.

Conrad Hall used a kind of sepia tinted hue, capturing the events as poetic/romantic chimera to take us to a dream-remembered west. Newman and Redford so effortlessly give life to the title characters that we desperately want to believe the central conceit, that outlaws like that actually existed. It’s no accident that the pre-title card originally read, ‘Not that it matters, but most of what follows is true’. After too many laughs in the test audiences, they removed ‘Not that it matters, but’. George Roy Hill sculpts a mythic fable that looks at the fin de siecle  of the old west with quiet yearning. It enables him to set the relationship between Butch and Sundance against the crumbling of their way of life, and to imbue the relentless Superposse with an almost mystical power. They are the Superposse from the Id, demons and portents of the unknown fates sweeping towards Butch and Sundance, trapped between the past catching up with them and the future which has no place for them.

Butch Cassidy and the Sundance Kid  is a quietly subversive western in its own way, setting the parameters for what a filmed western could do post the gore and blood of Peckinpah's exceptional and visceral The Wild Bunch.  The film exudes charm and wit from the first frame to the last and Goldman's script is full of so many memorable lines that, like Casablanca , if one starts to quote them there'd be no room left on the page. Both Newman and Redford dominated American mainstream films for the next decade at least, and both managed to walk a line between commercial hit and 'worthy' smaller films. George Roy Hill continued to defy categorisation, directing the superb sc-fi/fantasy, Slaughterhouse Five,  and the Redford barnstormer The Great Waldo Pepper.  The three amigos reunited some 4 years later for the brilliantly entertaining The Sting, a sweet natured look at a depression era con that also stung the box office for many millions. George Roy Hill won a well deserved Best Director for The Sting   and the picture won Best Film, a worthy re-teaming if ever there was one.

Butch Cassidy and the Sundance Kid  is a lyrical and charming film, much under appreciated by the cognoscente, but a solid gold hit with the movie-going public hungry for myth as dream-reality, and in the warm glow of friends like Butch and Sundance, who could quibble?. Superb. 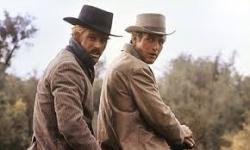 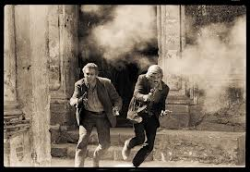