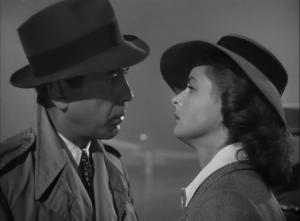 Here's lookin' at you kid

"I made so many films which were more important, but the only one people ever want to talk about is that one with Bogart."
~ Ingrid Bergman

Of all the film essays in all the sites in all the world…. 80 years on and still Casablanca sits atop the ziggurat of classic film as a model of studio manufactured perfection. Like a classic album that one can put on and listen to at any time and be transported this film repays the repeat viewer tenfold. It’s surely a symphony of joy, where all the players are note perfect and the conductor, while not a favourite of the cognoscente, is more than capable of getting the light and shade required, and by harnessing the collective efforts of virtuoso’s he creates something precise and mystical, something transcendent. Film is the most collaborative of all the art forms we humans flail away at. The painter and writer are mostly solitary individuals, the musician can play with an ensemble or solo, but the filmmaker rarely goes it alone. Michael Curtiz will, rightly or wrongly, never be mentioned in the same sentence as the word ‘auteur’.. but he directed such classics as The Adventures of Robin Hood, Mildred Pierce, Passage To Marseille, Young Man With A Horn, Yankee Doodle Dandee, Dodge City to name a few, and this his  crowning achievement, Casablanca.

The starting point was an unproduced play, Everybody Comes To Rick’s by Murray Burnett and Joan Alison, polished to a diamond like finish by Warner writers Philip and Julius Epstein and Howard Koch. The writing was, however, chaotic and pages of script were delivered just prior to shooting at times, prompting complaints from Ingrid Bergman, as she didn’t even know which man she would end up with she was told to play it ‘neutral’. At the edge of French controlled territory, Casablanca existed as the jumping off point to Lisbon and then America for many refugees who could make the treacherous journey, but as a result the black market for visa’s or letters of transit flourished. The centre of the action is Rick’s Cafe Americain, run by ex-pat Yank Rick (Humphrey Bogart) who we discover is a cynical loner who’ll ‘stick his neck out for no man’. The corruption in town is managed and even perfected by the smoothest policeman in cinema history, Louis Renault (Claude Rains) who knows more about Rick than many, including the fact that Rick has fought for liberal causes he believed in, he knows the wall he builds is a facade. We soon discover the reason he’s built that wall in the shape of Ilsa (Bergman) who broke his heart in Paris and who has now fronted up in Casablanca, with a husband in tow, looking for exit visas to the new world, and her Husband is no less than Victor Laszlo (Paul Henreid) freedom fighter and French hero. Rick’s dilemma is to help the woman he loves leave town with another man, or to turn Laszlo in and keep Ilsa for himself. Cross and double cross ensue until the ending we know and love transpires, and Louis and Rick walk off into the fog to continue the good fight.

Casablanca works its spell at so many levels, but the yearning it evokes for a simpler, earlier and happier time is universal. Everyone may at one time or another think that the present, chaotic world has gone to the dogs and yearn for their own personal ‘Paris’, when anything was possible. Rick is revived by the possibility of ‘Paris’ again, a metaphorical re-birth that enables him to connect again with the noble part of his psyche, the part he’d suppressed after making himself so vulnerable in the first place. Louis, for all his dry self-awareness also yearns for an honourable pursuit worthy of his talents, he’s been slumming too long and ruling the roost in Casablanca was like shooting fish in a barrel for him, Rick, whom he respects as an equal enables him to invest himself in a worthwhile endeavour again. These men are classic existentialist heroes, finding meaning in their actions, and connections in shared belief. Rick needs to peel back the layers of protection he has surrounded himself since he lost Ilsa, the drinking and cynicism that cover the ‘true’ Rick. Louis understands this as well and is happy to aid his friend in the effort, finding self worth in the process.

Stunning black and white photography from Arthur Edeson, incorporating all the Sternberg meets Noir tropes, created the faux exotica needed for the North African ambience. The Max Steiner score is legendary on its own, and has there been a better use of a song in a movie than As Time Goes By? A perfectly balanced cast of mostly International imports, some fled the Nazi’s in real life, works its magic to bring an almost dream-like atmosphere to life. Bogart became a screen immortal based on this role alone. His effortless coolness heralded a new type of anti-hero. Where his performance owes something to the cynicism of the French poetic-realist genre, he adds a layer of American bravado that would have thrilled the Europeans. Where Jean Gabin was of and for French and European audiences, warts and all, Bogie was a star from another world. Bergman, freshly brought to the States by inveterate poacher and opportunist David O Selznick, was the epitome of beauty and class, and made the love triangle dilemma almost believable, elevating what was after all a melodrama to a height rarely achieved. Bergman has little more to do than convince us she’s confused and conflicted as to what’s happening, but the production chaos aided her no end in this and her natural beauty was enough to stop any man in his tracks. The supporting cast does not make a false step, made up of the disparate types of character actors that fled Europe in the 1930s and found a welcoming community in Hollywood. Claude Rains, with cunning and smarts echoing the police chief in Pepe Le Moko, is deliciously cool and relishes every scene stealing quip he’s given, and if male friendship was ever idealised on screen it is in the exit of Rick and Louis.

Michael Curtiz never puts a foot wrong in the direction of Casablanca, and the opening market sequence is pure cinema, in a few short minutes he reveals in a series of stunningly fluid shots, the labyrinthine intrigues in the bustling, tiny streets and the myriad shady characters they contain. Curtiz's reveal of Bogart is strong and fitting and he never misses an arch quip or a sideways glance that can add meaning to the viewer and unwrap subtlety in the plot. The handling of the patriotic 'sing-off' in Rick's between the Nazis and the free French is both stirring and touching, even from this distance, bearing in mind that at the time the film was made the outcome of the war was in serious doubt. Curtiz keeps many disparate threads in total focus, and makes the most of a delightful cast which included several notable European exiles who had fled the Nazi's including Conrad Veidt, Marcel Dalio, Curt Bois, S.Z. Sakall, Madeleine Lebeau and the unforgettable Peter Lorre.

The exotic locales, the politics of war and the sophistication of the production meant the film was only a moderate hit upon release, but it found an audience after the real Casablanca made headlines during WWII and it went on to win Best Picture. Casablanca is possibly the high-water mark of the production line studio system that spawned it. Circumstances conspired to throw the right team together at the right moment with the perfect source material to create something greater than the sum of its parts. A tribute to its charm was that not even the people that made it were sure of what they had on their hands, right up to the ending, where a couple of different options were considered, but one was shot, which Curtiz liked so much he didn’t shoot the alternative. Thankfully the originally mooted stars George Raft and Ann Sheridan were not employed, one can’t imagine the film would work half as well. Bogart was still taking George Raft rejects and Bergman was complaining nobody knew what was going on and thought she’d made a bad choice. Their lives soon changed forever, as the world fell in love with the pair of them. This is alchemy on celluloid and it’s a hard heart that cannot be seduced by this perfect, deservedly beloved entertainment. You must remember this…. 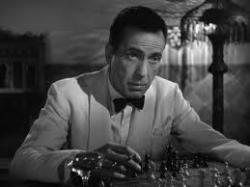 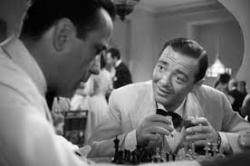 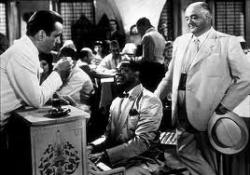 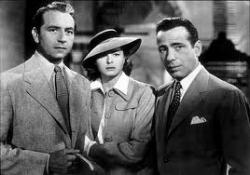 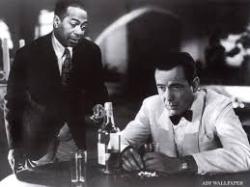 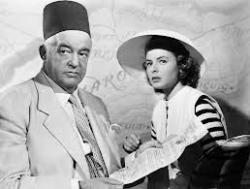 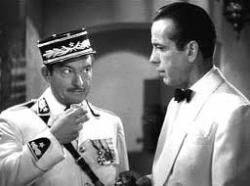 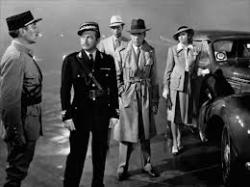