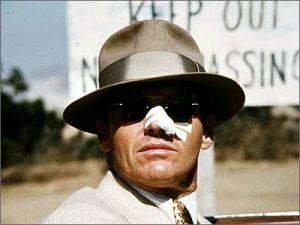 Robert Towne, one of the key writers in the resurgent American Renaissance period, wrote the intricate screenplay, all crackle and wit and Roman Polanski burnt it into our collective cinematic synapses using Jack Nicholson as his partner in crime. This film came towards the end of a golden run for director and star, and in the middle of the post Bonnie and Clyde film brat led push that would last until the blockbuster/cineplex unholy alliance dumbed down what mainstream movies could accomplish. Jack’s permanent air of edgy disquiet plays perfectly here as Jake Gittes PI, in sync with the bitter heart of Chinatown’s philosophy, learned as a young cop, which seems to be ‘if you try to do the right thing, this being Chinatown, it will turn out badly, or upside down’. Nicholson was in the middle of one of the hottest actor 'streaks' in history, The King of Marvin Gardens and The Last Detail prior and The Passenger and One Flew Over The Cuckoo's Nest  just after.

Produced by accomplished self-promoter Robert Evans, part huckster, part cowboy and total egomaniac, no expense was spared to help create a period piece that oozes conviction, from the art deco titles to the beautiful Jerry Goldsmith score. Within the deeply political and the deeply personal Towne constructs a mystery, one that Jake seems to be the only person capable of, or interested in, connecting the dots on. Gittes runs a small Private Investigation business and makes a living mostly by photographing cheating husbands ‘in flagrante delicto’, to satisfy the divorce laws of the time. The case appears innocuous enough with a suspicious wife, Evelyn Mulwray, wanting proof that hubbie is a cad. Jake goes through the motions and sees the mark, Hollis Mulwray, spending quality time with a much younger woman. He follows him and also discovers he has an interest in some odd places related to the city’s water supply. Soon Hollis is dead, the real Evelyn Mulwray steps forward and Jake is stitching up a sliced nostril that Bogart would never have had to deal with in The Big Sleep, or The Maltese Falcon both filmic reference points for this work.

The beauty of this film is it works on many levels. It’s a smart updating of the 1940s style noir gumshoe genre, complete with the wise cracking cynical operator, who’s either one step ahead of, or one step behind events. It’s the not knowing that keeps us all guessing. Towne uses the tenor of the early 1970s, the questioning of old authorities and power structures to comment upon unregulated greed. Hollis Mulwray dies because he felt ‘the people should own the water’. His old partner Noah Cross (John Huston), and he fell out over the matter and Cross represents a man who’ll stop at nothing, privately and publicly to satisfy his appetites. Jake begins to unravel the relationships between Cross, his ex partner and the mystery woman. Evelyn (Faye Dunaway) is the link for all the unconnected strands and ends up finding some degree of personal solace with Jake, who senses all the corrupt doings but can’t quite make the right conclusions.

In the end the Chinatown philosophy has its say. It is a corrupt and rotten world, sometimes brutally so, and beautiful things are not what they seem and people get hurt at the expense of unfettered greed. Roman Polanski weaves all the threads together to create an intricate and beguiling mystery that can still pack a punch, even in a post Jerry Springer world where every sordid personal revelation is grist for the entertainment mill, and restraint or dignity are unknown commodities.

Polanski was lured back to L.A, a place of misery and torment for him just a few years earlier, where his pregnant wife Sharon Tate was brutally murdered in the Manson 'family' crimes that shook America, but he wanted to work with Nicholson who was a close friend (Ironically Polanski would not direct another film in America due to a scandal involving an under-age girl he seduced in Jack's house and remained a pariah to many for decades after). Nicholson as Gittes personifies the decent enough guy who doesn’t know when to let sleeping dogs lie, a deceptively effortless performance matched by Dunaway’s intense and damaged Evelyn, holding tight to the idea that, if it’s too late for her, redemption can be a thing achieved via the next generation.

Chinatown remains Polanski's signal Hollywood masterpiece, as fine as his early European works, Knife in the Water and Repulsion, and a match for later brilliant films like Tess, or the personal The Pianist, cinema of the highest order. Chinatown evokes a bygone era without sentiment, it’s a nostalgia free zone, existing in a place between reality and dreams, where the politics of living are played out in the eternal dance between truth and lies. 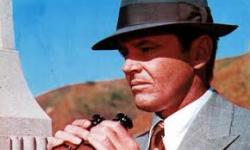 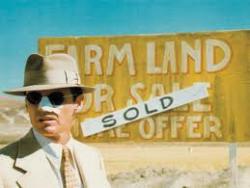 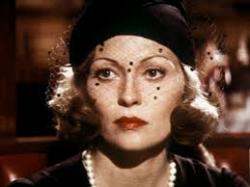 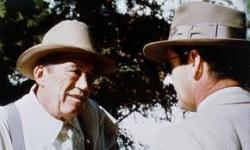