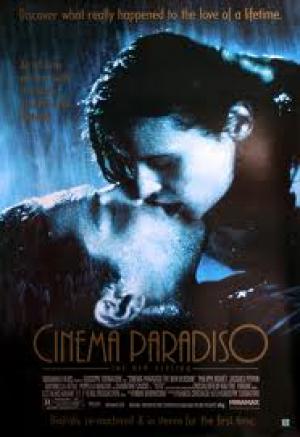 Giuseppe Tornatore composed a warm and tender love letter to cinema itself with his exquisite and evocative look back at the post war years in a small Italian town and the central role cinema played in the lives of the population. Tornatore wrote and directed the film, which follows the life and loves of the film obsessive Salvatore, from the age of 6 to his return home in his early ‘50’s a lifetime later. The film warns against lazy nostalgia, but its sentimental heart can’t keep the tears from flowing as we eventually witness Salvatore reconciled with his past.

“Your mother rang, somebody called Alfredo died”, the adult Salvatore (Jacques Perrin) is informed. He closes his eyes and immediately we encounter him as a six year old child nicknamed Toto (Salvatore Cascio) in his hometown, wide eyed and full of mischief. Toto spends all his time at the local cinema and badgers Alfredo (Phillipe Noiret), the projectionist to give him some off cuts of film, removed at the behest of the local censor; the town priest (Leopoldo Trieste). Toto convinces Alfredo to show him the ropes, and soon he’s assisting in running the projection booth. An act of magnanimity leads to a fire and Alfredo is injured, eventually we find the adolescent Toto (Marco Leonardi) running the booth on his own. Toto falls in love with Elena (Agnese Nano), a beautiful student, but her family thinks Toto’s social class is beneath her and they scuttle the relationship. Alfredo convinces Toto to leave for Rome and instructs him to never come back.

Cinema Paradiso is a film about memory, and cinema is memory frozen and perfect, whereas human memory is malleable and imperfect. It is also about the connective emotional threads that survive across the years, however imperfectly or arbitrarily we interpret them. Alfredo becomes Toto’s surrogate father figure after his real dad fails to return from the war, and Toto is also comforted by his dad’s resemblance to Clark Gable, an omnipresent figure at the cinema. Alfredo offers advice in the form of movie quotes to Toto, but finally uses his own words as he counsels Toto at the train station, “Forget about us, don’t give in to nostalgia”. The harsh realities of post war Europe meant many people were rootless, forced to effectively commence from a personal ‘year zero’ and to start again to build new lives. Alfredo sees his own failures and hopes to motivate Toto to not make the same mistake he did in not seeking broader horizons outside of the provincial and mundane. Toto’s mother is too caught up in her grief and day to day travails to recognise the torpor, but without Elena to keep him there the ties that bind begin to fray.

The film wears its love for cinema on its sleeve, and Tornatore includes many snippets of vintage scenes from Antonioni, and Jean Renoir to Bridget Bardot’s backside et al. to weave a tender and telling tapestry. La Terra Trema, Visconti’s neo-realist poem to poor Sicilian fisherman, is shown at the cinema and the townsfolk marvel to see themselves on screen. Fellini’s I Vitteloni also resonates with the viewers in the cinema, especially the scene where the workers are abused by the ‘loafing’ young bourgeois men, adrift in their small town ennui. Glamorous stars and goggle eyed comics (Fernandel) stir the passions of the cinemagoers, and we see both copulation and death visit the stalls as the vivid parade passes. Tornatore wisely keeps Toto’s adult activities under wraps for most of the film, until the sweet pay off scene in a screening room in Rome at the end.

The expanded directors cut of the film features a detailed reveal of Elena’s fate, as Toto tracks down his lost love. The adult Elena is played by Brigette Fossey, who provided one of the most beautiful child performances in all of cinema as a five year old in René Clément’s 1952 masterpiece, Forbidden Games. It’s apt that she contributes to Cinema Paradiso as it also contains a superb performance from a child, in this case the six year old Salvatore Cascio, whose energy and brio is beyond affecting and sets up a beautiful base on which the film builds. Toto’s love of family and cinema combine in his treasure chest as photos of his dad mingle with off cut film frames, until they all catch fire, a symbolic severing of the past and a foreshadowing of his leaving. Phillipe Noiret puts in a typically superb performance as Alfredo, touching and authentic, and the perfect foil for both the young Toto’s.

Cinema is a perfect medium for telling stories, and Cinema Paradiso is, more than anything else, the story of Toto, who follows his own yellow brick road. Toto needs to come to terms with his past, and Alfredo’s words ring in his ears, “Life is not what you see in films, life is much harder”, and he makes the journey back to confront some old ghosts, and to finally grow up. Tornatore takes us on a beautiful and warm hearted excursion into the power of memory and reminds us how the past is always with us, it forms and informs us, for better or worse. Cinema Paradiso was poorly received upon its Italian release, but international audiences fell under its spell and it became an instant classic. It duly won the Academy Award for Best Foreign Film and it would be a hard heart that does not succumb to its considerable charm and deep humanity. 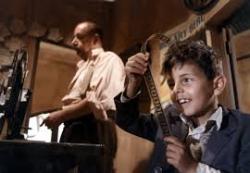 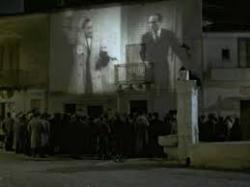