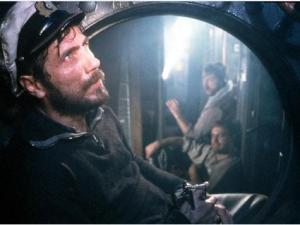 'Spam in the can'

‘I'm an unashamed realist, and actually, I try to make whatever the script is the reality of that situation, even though it's fictional.'
~ Wolfgang Petersen

'Spam in the can’ was the memorable phrase used by Tom Wolfe in his account of the Mercury astronauts in The Right Stuff. It could well be applied to these rugged World War II submariners who are also cramped in a thin metal tube and brimming with the same intestinal fortitude required to survive such an ordeal. Das Boot is an almost docudrama of a month or so in the lives of the crew of a German U Boat in 1941. Wolfgang Petersen has created a remarkable and visceral interior world where we feel the claustrophobia and sweat as the tension ebbs and flows like the endlessly rolling seas they prowl. Every Hollywood sub-flick convention is undermined here, no crisp and spotless bridges, no grease free engine rooms, no unstained sailors to be found. The square-jawed, heroic Captain figure (Jurgen Prochnow) is in place but his cynicism upon seeing the new raw recruits to the ’children’s crusade’ is palpable, and his disillusionment with the Nazi hierarchy obviously borders on dangerous.

Based on the memoirs of a WWII photographer, and here called Lt. Werner, it is with his eyes (Herbert Gronemeyer) we see the events unfold allowing us an innocents perspective from the start. We join the sailors as they’re blowing off steam prior to re-embarkation for another bout of the peculiar mixture of ennui and terror that was their daily staple. A couple of new recruits are straight out of central casting, but again the expectations are turned on their heads because of the direct approach of the script and the refusal of Petersen to overtly manipulate our feelings. The prissy Hitler Youth officer, so fired up with patriotic zeal he’s travelled from South America to join up, attempts to raise the standards of dress and conduct, which the more experienced members see as naive and redundant. The nervous young sailor who confesses he’s gotten his French girlfriend pregnant, much against the rules of fraternisation. We’ve seen all the types many times, but Petersen not only manages to freshen them up but then makes them pay off. Old heads and new blood set off in search of enemy ships to sink.

The first days out are full of optimism and enthusiasm, the space below spills over with provisions and spirits are high. The days drag by however and the prey proves elusive. Petersen, importantly, never gives us historical context. We don’t really know the current politics, the deep renders them pointless in a way. The tension builds as the opportunities for engagement lie agonisingly out of reach, and the sense of claustrophobia is amplified accordingly. A scent of a kill has them bouncing across the high seas like some Wagnerian heroes off to the slay the dragon, all adrenaline and exhilaration. In truth however, they are the dragon, appearing suddenly from the depths of the ocean to devour unsuspecting boats on the surface. The mixed feelings are voiced by the Captain who has a nostalgic yearning for sails, trapped as he is in a metal monster, stalking his prey. He also knows how quickly the table turns and the hunter becomes the hunted. The myth of the submariner was very strong in Germany, indeed they broke the maxim of Rule Britannia during the first world war. The wolfpack heroes of that time were like movie stars at home, after one of the early successes of a German sub resulted in 3 British sinkings and panic in the British Admiralty, the entire crew was given an Iron Cross. At first the rules of engagement were almost gentlemanly, the subs would surface in front of their quarry, let them get into lifeboats and then torpedo the ship. As defences got better and more organised unrestricted submarine warfare became the order and no warning was given to any shipping, armed or unarmed. Ironically it proved to be one of the key factors in dragging a reluctant US into the war, the tipping point in the balance of resources and the death knell of the Kaiser's ambitions. This was the inheritance of the German submariners of WW2. Petersen shows us something of the reverence in which they were held when they dock and rendevous with a merchant supplier in a French port. The obsequious reception is stomach turning in relation to the reality they endure daily.

Inept high command gives them a mission that the Captain knows will be almost suicidal, leading to a remarkable sequence at the bottom of the ocean straining nerves and resources. The photography and editing is superb and even with such a cramped and limited palette at his disposal Petersen has created a multi layered environment, utterly authentic and totally believable. The ensemble acting is of the highest order, combining beautifully to create a balanced structure that supports the lynchpin centre, the Captain. Prochnow is superb, one of the great performances, it ranges from gentle humanity to gut wrenching anguish and turmoil, Sturm und Drang indeed. One of the last great positions of unquestioned authority is that of a boats Captain, and in wartime the responsibilities are next to unbearable.The Captain ultimately is alone, facing the demons both internal and external. Here he faces the monster within when his trusted engine room master cracks up, and his stress induced response and judgement are flawed. The lives of these men are a heavy burden and Petersen neatly turns the tables when the sinking of an enemy ship reveals men still alive jumping ship and swimming towards the sub. The Captain for a moment sees the monster from the deep revealed, the monster that they are required to be, sending fellow sailors to Davy Jones locker and it is a sombre order to pull away.

Das Boot is a masterful war film, one of the very best. In a stunning, unexpected and deeply ironic ending Petersen adds an important chapter to examinations of the futility of war. The pity is we are still having to make them. 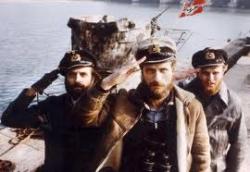 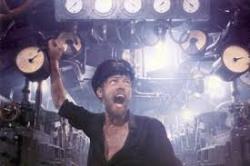 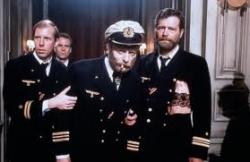