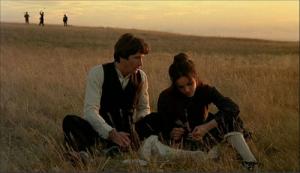 A glorious tone poem of a film, Terrence Malick’s ‘Days Of Heaven’ exists in recollection as a magic cinematic glow of warmth, a feeling more than a memory. Malick takes the much used scenario of  ’lover’s on the run’, as he did with his striking debut ‘Badlands’,  and turns what is a standard love triangle into something special as he twists it in myriad ways, playing with and against our expectations. On the surface it’s criminal versus good man, wealthy landowner versus poor worker, but Malick digs deeper and finds level most American films can only guess at. Instinctively perhaps he affected a kind of European aesthetic, and his choice of Truffaut’s cameraman Nestor Almendros to shoot it proved to be an inspiried one as the look of the film is intrinisic to it’s artistic merit. Malick recruited both Almendros and actor Sam Shepherd by mentioning it would approximate a silent film style of cinema, and over the course of production removed much of the dialogue from what was filmed.

Bill (Richard Gere) and Abby (Broooke Adams) are the lovers on the run, and straight away we are aware that Bill is capable of bad things. The couple with Bill’s little sister Linda (Linda Manz) in tow, hide out on a Texas wheat farm working as labourers. On the picturesque train journey with many poor immigrants Linda is told stories of apocalyptic prophesies that foreshadow events of Biblical proportions in the film. The lonely and aloof owner of the wheat farm, who remains nameless, is played by playwrite Sam Shephard in his first acting role and he becomes enamoured of Abby and finds himself falling in love. The subterfuge is that the Farmer is told Bill and Abby are brother and sister, so he assumes the road is clear to pursue Abby. His situation is further complicated by the fact that he has a terminal illness and knows his days are numbered. Bill encourages Abby to marry the farmer, hoping she’ll inherit his money when he’s soon dead and they’ll all be on easy street. The Farmer marries Abby but his illness does not progress quick enough for Bill’s liking. As the atmosphere builds like a portent of nature’s capriciousness the struggle for the protagonists to make sense of their relationships with each other is mirrored in the struggle of the relationship with the environment. Nature has her say in a plague of locusts and a rampaging fire, both destructive and cleansing. The love triangle is sorted out by no less cataclysmic methods.

The two men essentially represent the ‘other’ and are battling versions of themselves, imagining that what each other has is preferable to their own lot. The Farmer imagines Bill in a community where he feels connected and wanted, company and bonhomie of which the Farmer has none. Bill imagines the kind of freedom the Farmer’s money would offer him, and also a cure for his insecurities regarding ‘ownership’ of Abby. Abby demonstrates that possession of someone else is an impossibility on any terms, and only love freely given is worth having. Love can be a changing and fickle beast, as prone to the winds of change as any natural entity, and in this world all is impermanence

It may be one of the few major films where the male lead assents to ‘pimping’ the female lead for gain, as moral lines are continually blurred. The Farmer is after all exploiting an unequal power arrangement to bed Abby, who agrees to Bills entreaties. The action is minimal, the mood is all. The film is propelled by a pitch perfect laconic voice over by her sister Linda (Linda Manz) a late addition in post-production and ironically enough one that provided the key for Malick to make a more ‘silent’ film than he had planned, but the results are touching and unforgettable. The pacing is moody and very European, the photography so magnificent it won Almendros the Academy Award and set new standards of location excellence. The detail in the sets and costumes are impressive, Adams is vulnerable and believable, Gere is suitably angst ridden and torn and Shepard is cool and understated, at the centre of this very human struggle. The setting is stark and the Farmers homestead, which was built as a complete entity rather than a facade, is like some medieval castle surrounded by a sea of wheat. Gere is just another peasant, looking on with envious eyes, ready to overthrow the robber-baron within. His trojan horse is Abby, he just doesn’t expect her to fall in love with the Lord of the manor. The best laid plans of mice and men…

As a Harvard philosophy major Malick’s works possibly have deeper resonances and layers than many of his 1970’s Hollywood Renaissance contemporaries, and this would continue until his Magnum Opus in 2011, ‘Tree Of Life’, where what was once effortlessly suggested in his early work seems to have become self-conscious and indulgent. He got his start in the same milieu that threw up Jack Nicholson and the production compant BBS, indeed Bert Schneider produced ‘Days Of Heaven’ to the extent he mortgaged his house to cover any overages, and being a Malick film there were plenty. Gere was reportedly not happy with Malick’s working methods, and supposedly tried to have him removed from the film, not impressed that the quite wordy script was cut down so much in the almost 2 year period it took Malick to edit the film. He seems to have softened his criticism since in light of critical re-appraisal. It may have taken 2 years to edit and re-shoot some inserts in order to make sense of the new approach, but the results are forever. A stunning cinema experience to get lost in again and again. 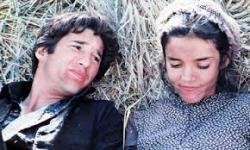 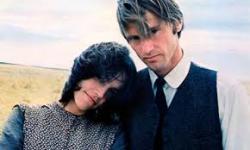