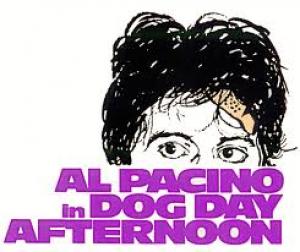 Sidney Lumet had been making quality films for many years prior to the resurgent movement of the American Renaissance in the late '66's, but his vigorous and interesting approach fitted perfectly with the new zeitgeist and he directed a couple of films that slotted in very nicely, Dog Day Afternoon  being one of them. Lumet had a background in TV, like Altman, and had made a name in the golden era of live television of the mid '50's, and soon transitioned to features, spectacularly with 12 Angry Men,  after Henry Fonda insisted he be given the job to direct. Dog Day Afternoon  takes it's lead from actual events involving a Brooklyn bank robbery, and Lumet cast Al Pacino in the lead, who had previously worked for him in the very fine Serpico.  Dede Allen, Arthur Hill favourite and frequent Lumet collaborator was nominated for an Academy Award for editing the film, as was Lumet for Director and the film for Best Picture..

Lumet eschews a musical score entirely but opens the film with a sequence showing Brooklyn at work and play, to the strains of Elton John's song 'Amoreena', from his Americana themed Tumbleweed Connection, playing on the car radio of three men eyeing a bank in Brooklyn. Sal (John Cazale) enters the bank first, followed by Sonny (Al Pacino) and then a third, Steve, who tells Sonny he has "bad vibes".  When Sal pulls his gun, Sonny unveils his rifle and Steve panics and leaves, Sonny gathers all the tellers, mostly women, and packs the money in a bag to leave. The days takings have already been collected however and only $1100 is found, which delays Sonny as he tries to top up the takings with travellers cheques, and then proceeds to burn any trace of the register, causing smoke to be seen from across the street. Sonny soon finds the police have arrived in force, and he's stuck in the bank using the staff as hostages and trying to find a way out.

What makes the film so different to the traditional bank robbery story is the humanity Lumet offers as he explores Sonny's motivations and shows Sal's nervousness. A rapport is struck up between Sonny and the staff, "Did you have a plan"?  asks the incredulous senior teller Sylvia (Penelope Allen) as the situation deteriorates, and the news crews arrive. Police negotiator Moretti (Charles Durning) tries to mollify Sonny, and gets an agreement to release one hostage, when the older black security guard who's had a bad asthma attack is chosen Sonny and Sylvia walk him out, only to have him set upon by the police who assume he's one of the robbers. Lumet satirically indicates the racial stereotype still prevalent at the time, "He's one of the hostages"!  Sylvia yells, to the white cops, and then she refuses to leave her girls and returns inside.

It transpires Sonny is a Vietnam veteran, struggling to come to terms with civilian life, and he's politically aware to boot, telling the staff that the police won't hesitate to shoot, "See what they did at Attica"?  he says, setting up a common man versus 'the man' prism through which to view events. Sonny becomes something of a folk hero to the crowds who assemble on the streets to watch the siege and when Moretti coaxes him out Sonny insists the cops put down their guns, to cheers of support. When the cops are slow to comply Sonny starts to yell, "Attica, Attica",  and the crowd yells it's support. Attica State Prison was where a heavy handed authoritarian response to a siege led to the deaths on nearly 40 prisoners and guards in 1971, the year prior to the events in the film. It's 'the man', in the form of cold eyed FBI agent Sheldon (James Broderick) who'll have the last word. Sonny takes a call from a TV station, and realises he's big news, "The audience is interested in you Sonny",  he's told by the anchor, "yeah, we're hot entertainment",  Sonny sarcastically replies, aware of the prurient interest he's attracted. "We're just a freak show anyway",  he says later.

That interest takes a bizarre twist when it transpires that part of Sonny's motivation to get money was to pay for his gay lover's sex change surgery.  Leon (Chris Sarandon) is eventually persuaded to come to the scene of the siege and talk to Sonny, and in a remarkable near 8 minute sequence they have a tender and strained conversation which is the beating heart of the film, putting into perspective the events and showing Sonny's great love for Leon. It also allows some background on Sonny to be given, and he's a deeply unhappy, angry and conflicted man, something that can be traced back to his Vietnam experience. Did life in the military bring out his bi-sexual tendencies, as his wife indicates he was happy in their marriage, and was a good father to their two kids? Sonny is a man trapped between two worlds, an unable to find solace in either, he's an outsider and can't seem to resolve the competing tensions. Society has him in a cage, now they have him boxed in literally, as the 'free' world outside looks on in what now seems a bleak dry run for a future dominated by the ritual humiliations of reality TV.

Lumet, who could be guilty of preachy, soft liberal 'message' films, finds a way to weave entertainment and heart into the mix in a way that elevates the film above most of his other output. He had a great knack of getting fantastic performances from his actors, and never more so than here, Pacino, then on a hot streak after the first two Godfather  films is riveting as Sonny, and Cazale touching as the not-so-bright Sal "which country do you want to go to"?  Sonny asks him when he's planning to ask for a jet to fly them away, "Wyoming",  Sal replies. A hot and sweaty day, during the 'dog day's' of summer provides the backdrop for one of the fine films of 1975, a year almost as rich in American quality cinema as 1939, and a Lumet's contribution is a viewing must. 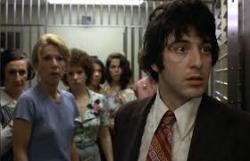