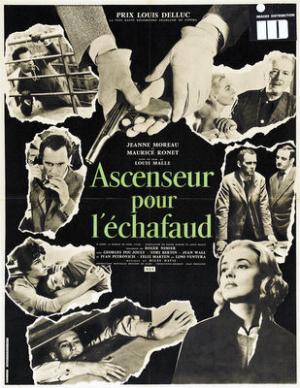 Elevator to the Gallows

If the Nouvelle Vague didn’t ‘officially’ begin with Louis Malle’s precocious Elevator to the Gallows then I think we can agree it could at least be seen from there. Malle came to his first feature obviously with one eye to making a commercial, Hitchcock shaded Noir, and another to constructing a Bresson-esque meditation on the emotional and metaphorical prisons in which we are trapped. Malle was coming off working for Bresson on A Man Escaped and following a trip to America decided on a pulp-ish novel as the source material, collaborating with writer Roger Nimier to wring every drop out of the scenario. Cinematographer Henri Decae bought a flavour of Melville’s Bob Le Flambeur which he also shot to the proceedings, making the striking images of rain soaked Paris at night unforgettable and Jeanne Moreau a star for good measure.

The claustrophobic opening dialogue, shot in extreme close-up of Florence (Moreau) and accompanied by a moody Miles Davis score, starts us off with an unsettling and confusing conversation between lovers, as the camera backs away we see they are actually speaking on the telephone and are not in the same location at all. Apart from the desperate declarations of love it’s plain they are plotting something that will enable their ‘freedom’, from what we don’t yet know? The man, Julien Tavernier (Maurice Ronet) is an ex-soldier who is now working in a large modern office block for a rich arms dealer Simon Carala, and he begins an elaborate series of events that end with the murder of Carala, made to look like a suicide, after which he heads for his assignation with Florence. Julien ensures his alibi by being seen by the security guard leaving, but realising he’s left an incriminating rope hanging on the outside of the building he sneaks back in to retrieve it only to be trapped in the elevator as the security guard powers down the building for the night and leaves. Julien is unable to make the meeting, Florence is worried and while she waits she’s addressed by an acquaintance as Mrs Carala, she is Simon’s wife.

The counterpoint to Julien’s and Florence’s story is that of the flower girl Veronique (Yori Bertin), who works in a nearby shop and idolises Julien, much to the annoyance of her jealous and immature boyfriend Louis (George Poujouly). Julien had left the keys in his car , parked outside the florists when he ran back into the building, and Louis seizes the moment to go for a joy-ride in it, Veronique hopping in at the last minute. They drive past Florence who recognises the car as Julien’s and assumes he’s driven off with the young woman, as she can only see the passenger and not clearly the driver. She thinks ‘Julien is a coward who couldn’t pull the trigger to be happy’ and starts to walk the street in a daze. The young couple meanwhile hook up with a pair of German tourists and check into a motel (as Mr and Mrs Julien Tavernier) in adjacent rooms drinking and partying. Malle builds the tension showing Julien’s forlorn attempts to escape from the stuck elevator, while Florence starts to search out familiar city haunts hoping to discover Julien and his young girlfriend. Louis and Veronique decide to do a runner on the Motel bill and steal the German’s car in the process, only to be discovered by the irate German, Louis pulling a gun he’d purloined from Julien’s car and shooting the German couple dead. Holing up in Veronique’s flat they are convinced they’ll be found and sentenced to death and so decide to take an overdose of pills in a suicide pact.

Florence is rounded up inadvertently in a vice bust in the wee small hours, but once police realise she’s the wife of influential businessman Carala they quickly back-peddle. Julien is freed at last and sneaks out of the building trying to call Florence. The motel murders are linked to a ‘Julian Tavernier’ and Florence upon finding out sets out to find the flower girl, getting her address from the shop. Julien is shopped to the police by the staff of his local coffee shop, and in the meantime Carala’s body is discovered by the security guard, but suicide is assumed. Florence finds the couple, alive and groggy not having taken enough pills to do the deed. Louis flees back to the Motel on a scooter, the only thing that identifies them instead of Julien is some photos they took with the German’s on a camera of Julien’s found in his car, and the film was left there to be developed, Florence follows him. Louis walks in to collect the photos but the police are there and he’s nabbed, the photo’s betraying him. Florence arrives and, after having denied a close connection between her and Julien which would incriminate him in Carala’s death, she is confronted with other photos on the film of Florence and Julien obviously in love and together.

Moreau found her pitch with this film and would never look back, her haunting beauty and aloofness bringing an almost existentialist tone to the performance. Malle has her ‘free’ on the streets of Paris but in reality she’s as trapped as Julien is in the elevator. Ronet is suitably rock solid as Julien and will go on to achieve great depth in Malle’s masterful Le Fou Follet. Malle weaves in a modicum of political awareness is, the Algerian situation and Indochina being referenced as concerns of Louis’ generation, as well as the morality of Carala’s business, being war. The shooting of the German after he’d stated earlier ’German’s don’t like war, we are travelling businessman’ carries a certain irony. The fatalism and noir associated lighting suits the material perfectly and there has rarely been a more assured feature film debut, incredibly Malle was only 24 years old at the time, the same age as Welles on Citizen Kane. The justly lauded Miles Davis soundtrack was achieved by Miles improvising live while watching the film being played back, done in two sessions and the results are eternal. Seemingly hell bent on never being categorised and pinned down, Malle never returned so directly to Noir, waiting until 1980 and the beautiful faded-noir of Atlantic City. It may be that contrarian impulse that has led him to not associate himself with the Nouvelle Vague as a group, but his nationality and output that ran in parallel to Truffaut and Godard et al, suggests otherwise. Semantics aside this film is an essential part of a vibrant and integral cinematic era. 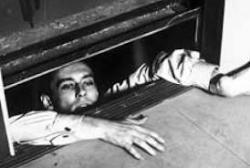 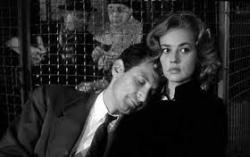 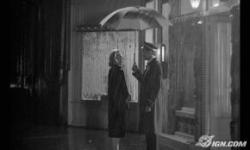 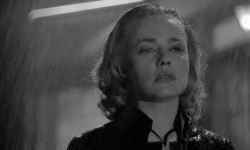 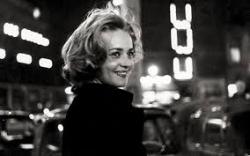