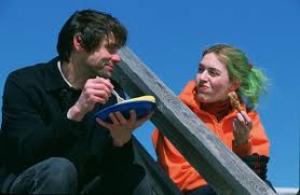 Eternal Sunshine of the Spotless Mind

Charlie Kaufman’s career as a genius writer, specialising in an idiosyncratic dissecting of male and female relationships reaches it’s apogee with Michel Gondry’s ‘Eternal Sunshine of the Spotless Mind’. Kaufman provides his unique perspective in a quirky and poetic manner, perfect fodder for Gondry’s ‘magical realism’ approach to cinema.  Gondry takes a chance on casting Jim Carrey, a comedian famous for his tasteless gurning and broad Jerry Lewis-lite style, and reveals new dramatic depths in him, of the kind hinted at in Peter Weir’s ‘The Truman Show’. Kate Winslet stars opposite Carrey, and brings a gravitas and boldness to the role of Clementine, the girl determined to forget a painful relationship via a most unusual method. Gondry builds the story like a puzzle, with intricate flashbacks and cross threaded narratives that challenge the viewer to pay attention, and in the process makes one of the finest pictures of the first decade of the 21st century.

Kaufman starts the story with a meeting between Clementine (Kate Winslet) and Joel (Jim Carrey) on a train from Montauk, Long Island. After a brief period in the relationship of the first flush of promise, it’s apparent we’re viewing the relationship in flashback, with Joel attempting to reconcile some peculiar happenings. He meets Clem and she doesn’t recognise him at all, causing him to investigate how this has happened. He locates a firm called Lacuna, run by Dr (Tom Wilkinson), a firm that specialises in erasing painful memories from it’s clients by way of a brain procedure. Joel signs up for the course, as he tries to forget Clem as well, but before the process is complete he changes his mind, trying to hold on to some memory of their time together.

Kaufman examines the gap between the painful final break up phase of a relationship, and cleverly runs it parallel with the moments of joy and hope that characterise the early moments. The concept of hearing your future self describe the current person you are in love with in derogatory and hateful tones is a succinct way of cutting to the relationship chase. “Blessed are the forgetful, for they get the better, even of their blunders”, is the philosophy at the heart of the piece. Kaufman distils the essence of what makes us human, the ability to incorporate pain and loss into our life experience and merely asks what it would be like if we could erase the memories and pain? Gondry creates a visual feast to accompany the intricate script, matching the quirkiness of the aural inventiveness with French flair and an unerring mise en scene.

Gondry’s casting sense is finely tuned, and Mark Ruffalo and Kirsten Dunst shine in key support roles, characters that darkly mirror Joel and Clem. Ruffalo’s nervous energy and Dunst’s vulnerability nicely balance the demands of the script, but it’s the leads who dominate with career best performances. Carrey has never been better used, and demonstrates he’s an actor of depth and nuance with a fine and tender characterisation. Winslet manages to mark herself as an actor of rare ability, to shed the mainstream baggage of cardboard blockbusters like ‘Titanic’ and to reinvent herself as the intelligent, go-to actor of choice, the finest of her generation.

Kaufman roams wild and free with his riffing on shame and fear, key components of any self examination in light of how we view our role in intimate relationships. In a sequence where the ‘brain’ technicians dig deeper to find the darkest humiliation and shame he visits the moment a young Joel is caught masturbating by his mother, and manages to convey a world of emotion in a 30 second segment. Kaufman cleverly links the concept of damage to the act of suppressing memories, when the Doctor admits of the process, “technically speaking it is brain damage’. The idea that brain damage equates with relationship pain is a typical Kaufman trope. Gondry makes great use of a sequence that matches a crumbling memory to a beach house that falls apart bit by pit, a beautiful metaphor for a life being holed out like a Swiss cheese. Kaufman points up the necessity of a whole person being made as much by the flaws and mistakes as the successes and easy wins, reminding us of what constitutes the fundamentals of humanity. Relationships are hard in Kaufman’s world, but that is no reason to not acknowledge the inevitability of change, and to adapt and compromise, rather than give in and attempt to erase the past.

Charlie Kaufman, who is one writer who could justifiably be nominated as an ‘auteur’ in a film sense, moved into direction with his next project, the difficult and dense ‘Synecdoche, New York’, and if ‘Eternal Sunshine’ is to be his valedictory effort as a writer, then it’s a fine one. Michel Gondry guides the property with a keen visual eye, and a sweet line in pace and tone, getting the best of the stellar script and wonderful cast. One of the essential films of the new millennium. 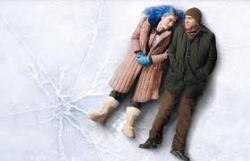 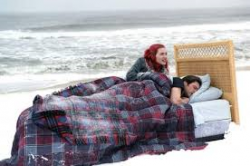