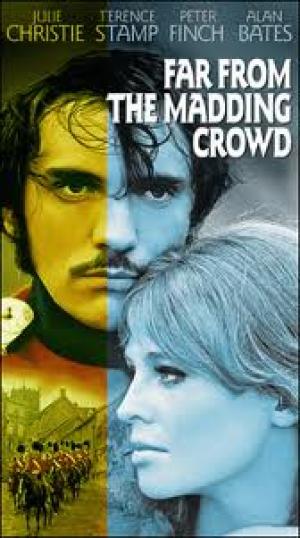 Far From The Madding Crowd

John Schlesinger made his name with a couple of British New Wave entries in A Kind of Loving  and Billy Liar  in the early '60s, and with this Thomas Hardy adaptation he tried his hand at a period costume drama, albeit one with the class concerns consistent with the social realism of his antecedents. The screenplay adaptation was by novelist Frederic Raphael who had written Schlesinger's previous film, Darling,  and had won an Oscar in the process. Darling  star Julie Christie was again cast in the lead and this time she had to contend with trio of leading men with Alan Bates, Peter Finch and Terrence Stamp playing opposite. The superb cinematography and atmospheric capturing of the Dorset locations was by Nicholas Roeg, who began a distinguished career as a director himself soon after. Schlesinger was also greatly aided by a magnificent Oscar nominated orchestral score from composer Richard Rodney Bennett.

Bathsheba (Julie Christie) gallops across the coastal hills, a vision of youthful beauty and independence, and a transfixed shepherd, Gabriel Oak (Alan Bates) watches. He later visits her house and proposes marriage to her, practically laying out his prospects and clearly in love with her. "I don't love you"  she replies, and after a tragic event that sees Gabriel lose his farm his only comment is, "Thank god I'm not married".  Bathsheba goes to live with her Uncle on a large farm and when he dies she inherits it and decides to manage it herself. Gabriel goes to work for Bathsheba who struggles with the fact that she's a woman in a man's domain, but her determination drives her on, "I shall astonish you all".  Bathsheba impulsively sends a Valentine card to Boldwood (Peter Finch) a local Squire much older than her, and he in turn becomes besotted with her, proposing marriage, and again she's saying, " I do not love you",  but she keeps his hopes alive by not refusing the offer immediately. Love finds Bathsheba in the shape of the dashing cavalry Sergeant Troy (Terrence Stamp) and while Boldwood waits she starts an affair with Troy that has unforseen and bitter consequences.

The joy of the film is Schlesinger's sure handling of the emotional level of the complex relationships, which could easily have descended into melodrama. Oak's solid love for Bathsheba endures a thousand petty slights as he endures and waits out his rivals with a sure and decent heart. Troy's venal and duplicitous soldier is the superficial daydream of many an English maid, and Bathsheba proves as vulnerable as any as she falls for the heroic facade only to find nothing of substance underneath. Romantic love is her deepest wish, and she falls in love at first sight, but Troy ominously remarks, "There's no such feeling in people".  Boldwood proves to be smitten to despair, emotionally stunted like many in his class he's aloof and removed from the earthiness of the life his workers enjoy. Schlesinger captures this beautifully at a celebration ball Boldwood puts on in Bathsheba's honour, where he's unable to communicate and interact with any of the guests in a fluent and easy way, he's awkward and stiff, it's cringe worthy stuff and delicately delivered by Peter Finch. Boldwood's tortured cry "I had a fake belief in the mercy of god"  speaks of a situation of which he has no control, something unfamiliar to a man used to calling the tune.

Far From The Madding Crowd  looks at an era where the patriarchal model held sway, where the ruling class took for granted it controlled the game completely. Bathsheba looks upon romantic love as an escape from the drudgery of her everyday world, a world that Oak readily sees for what it is and pragmatically embraces. Boldwood is looked upon by the scullery maids who share Bathsheba's romantic fantasies as a man with "...no passionate parts",  as she submits to the illusory future she envisages with her dashing soldier. Troy sees woman as another object for use and gratification, like his sword, the display of quasi-phallic artistry and ego he puts on for Bathsheba should have rung warning bells instead of wedding bells. It's a system where everyone has a place and everyone knows their place, but Bathsheba brindles at the bit on both a social and emotional level and bucks convention regardless of the consequences.

The film though rests mostly on Christie's able shoulders, her Bathsheba is the centre of the piece upon which the action turns. She's able to convey the girlish whims that bring her undoing in equal part with the ambitious and cold blooded rationale she needs to succeed in a man's world. She's able to declare she refused marriage "because he wasn't good enough for me",  but is not able to curb her compulsion for Troy, even though the reasoning part of her brain is well aware of his inadequacy and reputation as a ladies man, "I love him to distraction and misery",  she says. Christie is luminous in the role and it represents the full maturity of her British period, seen again to full effect in The Go-Between  before she embarked on her American sojourn. Stamp's oily Troy is one of his best performances, his turn as the Dick Turpin side show act after his disappearance is a fantastic sequence, and it also shows Schlesinger's great versatility that he could bring the carnival atmosphere so vividly to life. Bates is fine as the sturdy and well named Oak, and his final bookend remark to Bathsheba is a fully satisfying conclusion to a superbly realised journey.

Nic Roeg was soon directing his interesting and non-mainstream features like Performance , Walkabout  and Don't Look Back  (with Christie) and Fred Raphael eventually wrote Kubrick's last film, the under-rated and misunderstood Eye's Wide Shut.  John Schlesinger went from the elaborate period finery of this film to the mean streets of New York with his next film, the seminal Midnight Cowboy,  marking him as one of the most versatile directors of his generation, but with the delicate and beautifully assured Far From The Madding Crowd  he provided one of the best period dramas in the British film canon, and that's saying something. 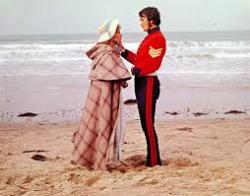 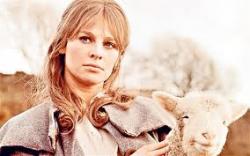