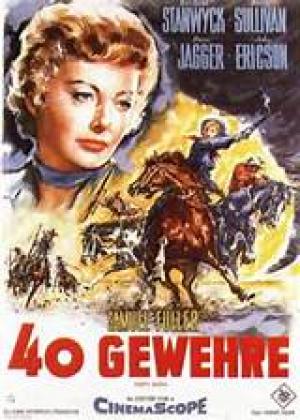 Sam whips the west into a lather

"I write with the camera. It is my typewriter."
~ Sam Fuller

Sam Fuller, American iconoclast and darling of the Nouvelle Vague,  directed with an energy and verve that produced many a startling result, none more pronounced than his quixotic take on the Wyatt Earp story (albeit uncredited), the sprawling horse opera, Forty Guns.  Fuller cast the stalwart Barbara Stanwyck as the full blooded rancher who ruthlessly controls her turf with hired muscle, and Barry Sullivan as the Wyatt Earp like lawman who struggles to contain her influence, both on the town and on him. Sam Fuller injected his particularly masculine energy into elevating material that was decidedly melodramatic and succeeded into turning it into something else, something twisted and mythic as the film mixes conventional sexual roles and slyly subverts the conservative mores of Eisenhower’s America.

Griff Bonnell (Barry Sullivan) and his younger brothers Wes (Gene Barry) and Chico (Robert Dix) roll into Tombstone where Griff is looking to arrest a man for mail robbery. Griff soon has to deal with Logan (Dean Jagger), an ineffectual sheriff in the thrall of powerful rancher Jessica Drummond (Barbara Stanwyck) who lets Jessica’s wild, younger brother Brockie (John Ericson) get away with drunken rampages through the town. Wes falls for the local gunsmith’s daughter Louvenia (Eve Brent) and decides to stay on and marry, while Griff decides to move with Chico to California after he’s taken care of business, only he didn’t count on Jessica.

The bravura opening scene of the film is justly famous, as the Bonnell Brothers leisurely ride their buggy across a picturesque valley a thundering sound is heard in the distance. Across the hill forty rider’s gallop at top pace, led by a striking woman on a white stallion as they continue apace and tear past the dumbstruck brothers who are stopped in their tracks. It’s an arresting start to the film that sets the tone for the sexual politics to come, with Stanwyck taking the conventional male role of leading a powerful posse and Sullivan taking the feminine role of sitting in a buggy and watching the riders thunder past. The roles further blur as Griff is shown to be level headed and conservative, whereas Jessica is hot-headed and fiercely protective of her empire. The arc of the film is their journey towards each other as they discover common traits.

Griff is a seeming near pacifict, and a stickler for the rules, a lawman who abhors the corruption he sees in Logan and he maintains his integrity in the face of a bribe from Jessica. In a charged and remarkable sequence of Jessica dining with her ‘forty thieves’, she tries to employ Griff as a gunman, he tells her “I don’t kill for hire,”  wherein she snaps back, “I’m sure you don’t kill for fun.”  They enjoy some very suggestive banter about his ‘gun’, she says, “May I feel it?”  “It might go off in your face,”  he replies, “I’ll take that chance,”   she snaps back. It’s these kinds of barbed and witty exchanges that cement their attraction for each other.

Sexuality in a post war environment was a changing beast in the superficially ‘white bread’, homogenous, Eisenhower ‘50s, as women pressed to keep many of the gains they made when they stepped into jobs vacated by the men during the war. It would not be until the 1960’s and the counter-culture with the second wave feminism of the women’s movement where these issues would spill out into common consciousness, but strong women characters like Stanwyck’s played a role in setting the ground for change.

Sam Fuller was not afraid to mess with the form in regards to western conventions, adding elements of noir and melodrama, even a touch of the surreal, in order to achieve his vision. Forty Guns  was not the first western to have a strong woman character as the pivot on which the film turns, even Stanwyck had starred for Anthony Mann in the remarkable and dark-hued The Furies,  some 7 years earlier, but it pushed boundaries like no other. Suicide was certainly not a staple in mainstream ‘50s cinema, but Fuller deals with the topic appropriately, and the overlay of the psychological aspect of Jessica’s younger brother’s condition doesn’t seem as forced as it did in other ‘50s melodrama.

Fuller’s visuals are a treat, fully realised by ace cinematographer Joe Biroc, and the stylish black and white feels deep and rich, accenting the dark skeins of emotion and violent undercurrents that swirl through the story. Fuller shoots a remarkable howling tornado set piece, one that forces Griff and Jessica to finally admit their burgeoning love for each other, and a classic and tense shootout sequence. There are lighter moments, such as the early bath sequence and the ubiquitous (post High Noon) songs, and the cast make the most of the double entendre’s and pulp-camp dialogue, particularly Gene Barry and his gunsmith girl. Barbara Stanwyck is one of the strongest reasons to see the film, and she dominates every scene she’s in, a fact accented more by the hardness of her role in relation to the much softer Griff. Barry Sullivan was a kind of milquetoast everyman in ‘50s cinema, but his easy earnestness is put to good use here by Fuller.

Sam Fuller wanted to make a sexually charged and pulp-ish western, in fact he wanted to call the film, Woman with a Whip,  but had to settle for the bizarre central song, High Ridin’ Lady with a Whip  as the closest he could get. He also wanted to avoid the studio imposed happy ending, but in the end he had to settle for what the traffic would allow, but even so the film scores more hits than misses and remains a classic ‘distaff’ western, as essential and twisted in its own way as Nicholas Ray’s Johnny Guitar  and Fritz Lang’s Rancho Notorious.  Forty Guns  is crammed with style and pizzazz, a dizzying ride from pulsating start to the near shocking finish, a film with balls from a director and star with same. Sam Fuller was a movie maker who was not afraid of sex in the 'sexless' '50's and tried to show passion in a passionless world and the violence that those passions could sometimes generate, no wonder the French venerated the old bastard. 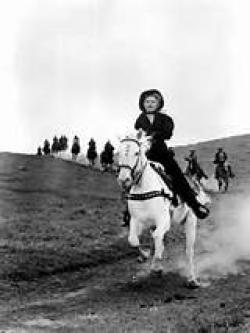 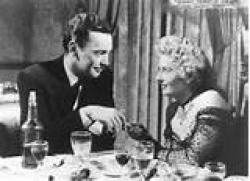 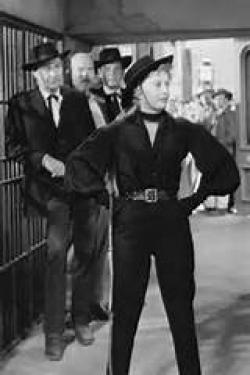 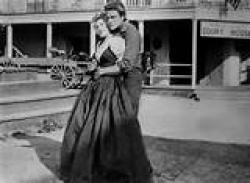