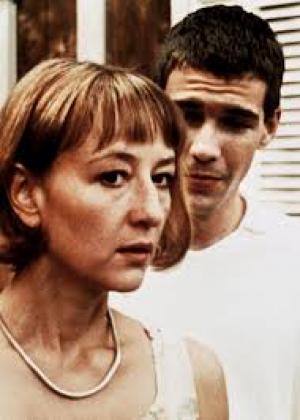 There's nothing funny about this game

"My films are intended as polemical statements against the American 'barrel down' cinema and its dis-empowerment of the spectator. They are an appeal for a cinema of insistent questions instead of false (because too quick) answers, for clarifying distance in place of violating closeness, for provocation and dialogue instead of consumption and consensus." ~ Michael Haneke (Films as catharthis)

Austrian iconoclast Michael Haneke has consistently proved to be in the very front rank of directing talent for decades, ever since his disturbing feature debut The Seventh Continent  in 1989. He has been prodding and shocking audiences ever since and never more so than with his 1997 Austrian film Funny Games,  a film he re-made in 2007 in America. Haneke’s avowed intention was to make a comment on violence and the media, to show a pointless act of cruelty in an utterly mundane setting, and given America’s propensity for conflating media and violence he felt he needed to offer it to them in their own language, getting his message to a wider audience, maybe one who really needed it.

Georg (Ulrich Mühe)and Anna (Susanne Lothar) are the perfect middle to upper class couple, driving up to their lake house for some holiday boating with their young son Georgie. Once at the house the family encounters two unfamiliar young men who are first seen with their neighbours and then when they drop over asking to borrow some eggs. Peter (Frank Giering)and Paul (Arno Frisch) manage to take the family hostage and embark upon a series of cruel games, taunting the family with psychological as well as physical terror. The mild mannered and cultured family are suddenly in a battle for their very existence.

A trope much favoured by Haneke is to present a benign and comfortable family situation and then to watch it unravel under stress. In Funny Games  he begins with a game, a guessing game where Georg and Anna play ‘guess the tenor’ on the car CD player, “Bjorling”?  she questions, before Haneke switches from the cultured classical music of Handel to a slab of brutal thrash metal. The next reference to a game is when Paul visits the house, on the pretext of borrowing some eggs for the neighbours, and proceeds to pick up a golf club. Haneke builds an air of dread as Paul leads Anna on a ‘find the dog’ game, where she’s hot when near the location and cold when not. As Paul leads Anna through the hoops he turns and breaks the 4th wall by overtly winking at the audience.

If society is governed by tacit rues of civility, or at least the appearance of same, Haneke examines what happens when those rules are replaced by another, more anarchic set of principles. “Why are you doing this?”  Paul is asked, “Why not?”  he replies. Civility is sorely tested as Anna realises that the boys are not visiting to borrow eggs at all, and it takes all her resolve to ask them to leave. Paul mocks the upper class when talking about his accomplice Peter’s weight, “Fatty?… He comes from a filthy deprived family, they are all drug addicts.”   Haneke further muddies the waters as Paul is obviously a member of their own class, bored and unengaged he further mocks Georg and Anna’s lifestyle, “tormented by ennui, weighed down by the void of existence.”  Haneke frames the struggle between the opposing philosophies as a battle for meaning.

Haneke pursues his objective, of challenging both the audience’s complicity in screen violence and its disempowerment by a series of self-referential episodes. When Georgie escapes Haneke realises that cinematic convention dictates we, as the viewer, all hope he can get help away or get help. Paul addresses this with a reference to the escape as an emotional device on the filmmaker’s part to manipulate the audience, “don’t forget the entertainment value”  he deadpans to the screen. He makes a bet with the couple that they will be dead by a certain time and again asks the audience “whose side are you on?”  Paul forces Anna to strip and, as a repudiation of the normal drivers of the prurient interest mainstream cinema employs in this situation, Haneke does not show Anna naked, forcing a subtle rethink of our response.

The violence is all the more shocking because of the offhand and casual nature with which it is presented but perhaps the most disturbing thing Haneke offers is a single, 11 minute shot of Anna’s reaction to her son’s murder. Paul again breaks the 4th wall, saying “We want to offer the audience something”  before adding “Is that enough?”“We are not up to feature film length yet.”  Haneke also takes a subtle dig at Christianity, the naming of the villains as Peter and Paul should be a clue, and Paul offers Anna the chance to pray her prayer of choice, “I don’t know any” is her fraught reply. That the final insult occurs in a beautiful sailing boat, a symbol of wealth and affluence, is a stark full stop on a devastating cinematic missive.

Haneke originally planned to set the film in America, intending to lampoon ‘slasher’ films like Scream  (1996) but had to relent because of budget. It says something of the ‘slasher’ film genre he was lambasting that shortly after the original Funny Games  a series of Scream  sequels created a cycle that made Hollywood yet another fortune exploiting violence. Haneke knew he’d manipulated the audience successfully when they applauded the killing of “the fat guy”  (Peter) at a screening he attended, an ironic consequence indeed. Haneke’s cinema is one in which the audience is made to work, made to consider the consequences and to think many things through for themselves. Funny Games  stands as a beacon of almost documentary like realism, clothed in the slick garb of the feature film. Even as Haneke explicitly states to us, ‘this is a film’, there is an un-stated concomitant that challenges us to examine our reaction in light of this approach, to re-think our relation to violence in whatever media we encounter it.

As with all of Haneke’s work the contribution of the cast is critical. Haneke’s actors, even the well known ones, all seem to manage to subsume any element of ‘self’ and to provide an almost Bresson-ian level of lack of artifice at key times. Ulrich Mühe and real life wife Susanne Lothar both worked for Haneke on several films and are completely convincing here as the beleaguered couple. In a sad postscript each would die relatively young at 54 and 51 years of age respectively in 2007 and 2012. Arno Frisch is mesmerising as the ice-water-for-blood Paul, and Frank Giering is fine as his much put upon accomplice. Bizarrely Giering would also die young at age 41, marking Funny Games  as some kind of sad, modern equivalent of John Wayne’s The Conqueror,  filmed near desert nuclear test sites in the ‘50s, most likely causing many of the cast and crew to succumb to cancer in the following years.

Michael Haneke would go on to even greater glories after Funny Games, confirming his place as the most polemic and masterful of all modern filmmakers. Haneke proved with Funny Games   that he was the natural inheritor of the élan of Antonioni, the stillness of Bresson and of the deconstructionist ethos of Godard. Funny Games  is a kick in the gut, a visceral and confronting piece of cinema that does not shy away from making the viewer consider the unspoken compact between director and audience. The original is preferable I think, but the re-make (while redundant to some) is a worthy frame for frame re-working with a first rate cast. When the great European directors of the last fifty years are mentioned Michael Haneke will rightly take his place with his peers in the very forefront. 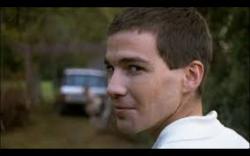