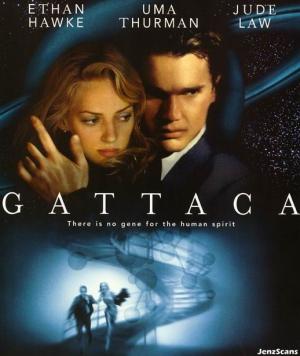 'My first obligation is to entertain but as far as science fiction goes, it's much easier to comment on today from another time because people then aren't focused on 'did you get the details right?' ~ Andrew Niccol

Andrew Niccol’s pensive treatise on what it means to be human is a thoughtful and elegant film, centred as it is around the science of eugenics and its applications and implications in the ‘not-too-distant future’. Niccol made the deal to direct his first film from his own script in a clever piece of marketing as he’d written the hottest screenplay in Hollywood with The Truman Show and several studio’s were in a bidding war for that, he simply used Truman as leverage. Originally wanting to direct Truman, he realised no studio would give a first time director such a large project ($60 million) so he settled for Gattaca’s large, but slightly more modest $36 million. The touchstone for the visual look of the film is the modernistic architecture of the 1950’s and the film references Godard’s Alphaville in this, also in the use of classic cars, neat suits and detective’s in trenchcoats. This ‘past as future’ would also surface in the style of bureaucratic organisation and symmetry of the Gattaca research building.

Niccol opens the film with a biblical quote, ‘Who can straighten out what God has made crooked’? and with an austere and haunting Michael Nyman score we see ‘Jerome’ (Ethan Hawke) going through an elaborate morning cleaning routine before setting off to work. Jerome enters the Gattaca centre and is urine tested upon entry where he registers as a ‘valid’ and gains access. He is a successful researcher at Gattaca, an organisation that launches a dozen spacecraft a day on various missions and he is due to take his place on a 1 year manned mission to Titan that is scheduled in a week’s time, the window for this launch coming around once every 70 years. Jerome recalls his path to Gattaca, and we see his birth was not that of a valid, but of an ‘in-valid’, where his parents opted for a ‘faith birth’, letting nature take it’s course with his conception rather than having him genetically modified by science before being selected by his parents. Jerome is in fact Vincent Freeman, and at the moment of his birth his DNA analysis indicates his health future in detail, down to the fact he will die of heart disease aged 32 years. His parents opt for a geneticist to manipulate the characteristics of their next baby, a boy called Anton, who is in every way the superior to Vincent. Growing up Vincent dreams of going in to space, he’s told the only way he’ll see inside a spaceship is if he’s cleaning it. The brother’s are competitive and soon engage in a game of ‘chicken’ in the sea, both swimming out towards the horizon until one gives in and turns back. Anton wins each challenge until one day Vincent swims further, having to save a struggling Anton on the swim back. Vincent leaves home and cuts off all communication with his family. Vincent takes a job cleaning at Gattaca and realises that with his genetic condition he will never get a research job there, so he goes to the underground market of identity theft and settles on becoming a ‘borrowed ladder’ where the DNA of an ‘elite’ will substitute for his and he’ll be accepted as an employee. Vincent is taken to Jerome (Jude Law) who was a top class swim star until a car accident left him without the use of his legs. Vincent becomes Jerome, Jerome becomes Eugene.

A director at Gattaca is murdered and detectives arrive to investigate. The lead detective is Hugo (Alan Arkin) who finds an ‘in-valid’ eyelash sample of Vincent’s and begins to track him down. Irene (Uma Thurman) is attracted to Jerome as a possible breeding partner and steals some hair to run a DNA test on his prospects, she offers him the same deal, but he refuses to run the test, intimating that he’d take his chances in an old fashioned or romantic way. Jerome and Eugene bond like true brother’s over the subterfuge and Eugene admits the car accident was in fact a suicide attempt, it seems that a swimming silver medal was not enough and he couldn’t live with being second best. Irene and Jerome begin to date, interestingly at a concert for a twelve fingered piano player! They celebrate Jerome’s upcoming flight at a dinner that is raided by police looking for Vincent. The couple escape and Hugo’s boss (Loren Dean) becomes suspicious of Jerome, Irene has to take him to Jerome’s home where Eugene has to stand in for Jerome to cover the identity fraud. Hugo tracks down the real murderer and Jerome is clear to take his flight, but realises Hugo’s boss is still suspicious of him and meets him at Gattaca, where it’s revealed he is the adult Anton. Anton intends to arrest Vincent for identIty fraud, but is again challenged to a swim, where again Vincent has to save him in wild surf, ‘I never saved anything for the swim back’ is Vincent’s explanation to Anton when asked how he beat him?. Eugene shows Vincent a stash he has built up of genetic material so the cover can continue if Vincent makes it bacK from Titan, his heart already 10,000 beats past it’s use by date. Eugene intimates he won’t be around at that point anyway, and when Vincent is finally on board and taking off, Eugene incinerates himself after putting his silver medal around his neck. Vincent has a lock of Eugene’s hair as he says in voiceover ’It’s said that all human atoms were once stars, so maybe I’m not leaving, maybe I’m going home’.

Niccol posits a science state, where if success is built into our genetic strands it’s advisable to eradicate any anomalies and produce the best specimens, rather than leave birth to chance and fate. The extension of this idea, much admired by Nazi and totalitarian regimes, is a bland and ‘perfect’ population where all defects are eventually ‘bred out’. Any person with an imperfection is a ‘de-gene-erite’ and state discrimination against these people is sanctioned and encouraged as ‘geneism’. Any musician will tell you that the most interesting moments occur not in the perfectly executed phrases, but in the mistakes, the unexpected and the chance events that playing music throws up. Niccol is also saying that a humanity without flaw is a humanity out of balance. If a creator God wanted perfection then how does flaw exist? In a Judeo-Christian sense we are second guessing God by trying to eliminate imperfection. The paradox of a ‘perfect’ God creating imperfection just seems like one more flaw in that belief system, but that’s another story. As humans we owe it to ourselves to extract everything we can from the hand nature deals us, to not save anything for the swim back. To find meaning in the swim would be the question for any existentialist reading of the film.

The performances are uniformly fine and Jude law in particular, this part catapulting him into the first rank of his profession, achieves a multi-layered characterisation. Alan Arkin is excellent in the supporting role of Hugo and Thurman suitably distracting as Irene, letting her hair down literally to become a warmer and more ‘human’ woman under Vincent’s influence. Niccol would go on to other interesting and thought provoking films to varying degrees of success, S1mOne, Lord Of War and In Time amongst them. His debut Gattaca however, is a beautiful and poetic film, a humanistic ode to uncertainty and an elegant and involving cinematic experience. 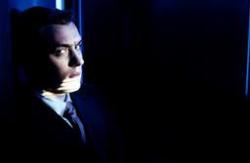 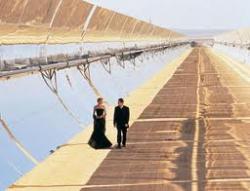