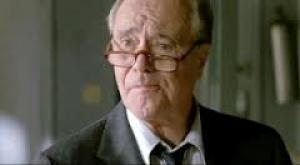 Capitalism, red in tooth and claw.

David Mamet’s coruscating dissection of red-toothed capitalism gets the big screen treatment with a stellar ensemble cast in James Foley’s quasi-faithful adaptation, Glengarry Glen Ross. Mamet provided the screenplay some eight years after his play took the theatre world by storm, having won both a Pulitzer Prize and a Tony award, and Jack Lemmon, Al Pacino, Alan Arkin, Ed Harris and Kevin Spacey gave it voice. Alec Baldwin provides a sharp cameo, with a new character written for the film, to set things in motion, and Jonathan Pryce delivers a neat turn as a victim of Pacino’s real estate scam-ster writ large. Mamet riffs on a modern take of the Faustian pact, as men under stress are faced with stark choices and the law of the jungle reigns.

The evening descends and the rain pours down on a commercial, low rent part of Brooklyn as several real estate salesmen at Premiere Properties convene for a conference in which they are told some of them will be sacked unless they improve their sales. Head office has sent Blake (Alec Baldwin), a corporate toe-cutter in to deliver the news and the men are in no doubt as to the gravity of his ultimatum. Shelley (Jack Lemmon) is a former hot shot salesman who’s in a slump, as he casually attempts to pour himself a coffee, Blake spits “coffee is for closers”. George (Alan Arkin) and Dave (Ed Harris) are cowed into silence and informed that those who can’t close a sale will be shown the door. Office Manager Williamson (Kevin Spacey) dangles the carrot of the Glengarry leads as reward, i.e leads with better chances to make a sale than the “deadbeat” leads they have been getting, as the men contemplate ways of winning the contest and keeping their jobs.

Blake arrives like the Devil in an expensive red car, the envoy of the all powerful Mitch and Murray, owners of the franchise. Blake delivers a motivational lecture the like of which has not been seen in the office before, setting up a ‘survival of the fittest’ contest, “You can’t close? You are shit”! Blake is challenged by Dave as to his status, asking the anonymous envoy his name, “I drove here in an 80 thousand dollar BMW, that’s my name”!, comes the stinging reply. Blake outlines the “downtown strategy”, posturing with all the passion and belief of a preacher and concludes with the invocation “Always be closing”. The men decide on various approaches to the threat, Shelley attempting to sell to one of his deadbeat leads, and Dave and George discussing a plan to rob the office of the Glengarry leads and take them to the opposition. The lead salesman, Ricky (Al Pacino) arrogantly avoided the meeting and continues working his mark, Lingk (Jonathan Pryce) in the bar across the street.

Mamet examines an environment of fear and mistrust, where the power imbalance skews the capacity for rational engagement and men are reduced to animal like responses. Like laboratory rats in a controlled experiment the salesmen lose sight of the manipulations by those in power and turn on each other, focusing on ‘winning’ by any means. The options considered are theft, intimidation, blackmail and bribery, as morality and hard work don’t get a look in, it’s a tacit admission that the game is fixed, and that decent behaviour doesn’t stand a chance. A desperate Shelley tries to bribe Williamson, knowing the new, juicy leads will turn his luck, but overnight the Glengarry leads vanish and the police are called in to interview the men.

Ricky arrives the next morning to discover the police investigation going on in Williamson’s office, oblivious to the chaos the Blake ultimatum has wrought. Ricky is the number one salesman, a first rate schemer at the top of a dirty game, and has contempt for weaklings. When Linyk arrives to re-think the contract he has signed with Ricky, the old pro Shelley chimes in with Ricky as they seamlessly work him until he appears to back down. Williamson unwittingly spoils the set up and earns the sharp end of Ricky’s tongue, “You never open your mouth until you know who the shy is”! Williamson is beneath contempt under Ricky’s code as he holds his Manager position via nepotism rather than merit, he is not a ‘man’, and in Ricky’s world this is key, belittlingly accusing him of being a “company man”. George is grilled by the police and reacts angrily to the interview, railing against the “Gestapo tactics” and frets about the ‘plot’ he concocted with Dave being revealed. Shelley worries about raising money for his wife’s medical operation, and believes he has turned his slump around after signing a contract with a couple for several units.

Mamet was responding to Reagan’s ‘Amerika’, a place where rising right wing, de facto fascism produced a capitalist free for all as tax rates for business and the wealthy decreased dramatically and poverty and social disconnection rose accordingly. The era produced the Gordon Gekko “greed… is good” ethos, as back room capitalists enjoyed the ‘right of the line’. Crucially, Mamet doesn’t show the police interviews, only the fallout and the tension they create, and he also keeps the ‘downtown’ money invisible, existing as an almost existentialist threat. In this Darwinian environment Authoritarianism is the dominant meme, and the subservient animals devour each other rather than challenge the status quo. Shelley’s once proud and dominant lion is now old and toothless, reduced to the chicanery and guile more suited to a weasel, whereas Rick is puffed up and arrogant, secure in his young lion primacy. Rick is so self centred he fails to see Shelley collapsing before his eyes, fooled by a late innings comeback where Shelley briefly hints of past glories. Ricky’s key line at the end hints at the tooth and claw element of the contest, and sums up his disgust at dealing with duplicity and weakness, when he spits, “This is not a world of men”.

The ensemble cast are mostly in career best form as they snap and spark off each other, made easier by the first rate script they have to work with. Lemmon is superb as the onomatopoeic Shelley, a ‘shell’ of a man, scratching out a life devoid of dignity. Lemmon graduated from the finest American comic performer in the middle of the century to one of it’s best dramatic thespians, and his characterisation of Shelley is the definitive essaying of an ageing worker under stress. Al Pacino, who’d starred on stage in a Mamet the prior year (American Buffalo) is also pitch perfect as Ricky, preening and primped, untouchable in his power to ‘close’. Pacino had lost his way somewhat in the ‘80’s, making some poor vehicle choices, but a stint on the stage re-invigorated him and he resurrected his screen career in 1992 with two roles, this one and his scene chewing turn in Scent of a Woman. Alec Baldwin has never been used more effectively than in his brief appearance as Blake and the always wonderful Alan Arkin maintained his standards as the inheritor of the Walter Matthau mantle of never turning in a sub standard piece of work. Spacey and Harris are integral to the piece working as a whole, and both men are excellent in smaller roles.

As a human endeavour work is both necessary and desired, and in a capitalist system work can also define an individual’s identity. If the power to control who works and how they work becomes corrupted, then work lacks the necessary dignity to allow people to function in an environment of respect and support. Mamet is writing in a large font here, but underneath lies a timeless message about power, which is never in equal measure in a work relationship, where the bosses manipulate and divide to suit their bottom line. Glengarry Glen Ross is a riveting and cunningly crafted sermon, from one of the sharpest writers in America. 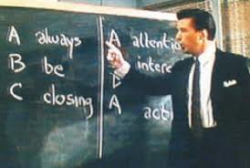 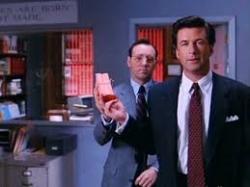 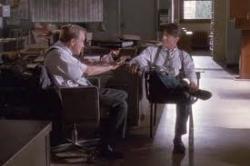