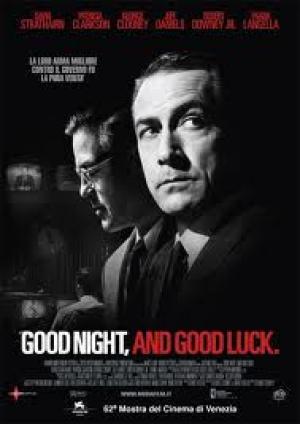 George Clooney made his second film as director based on the stoush between CBS journalist Ed Murrow had with virulent anti-communist Senator Joe McCarthy in the 1950's. Clooney's piece arrived in the middle of the George W. Bush presidency when right wing paranoia was rife, and his stated motivation to do the film in 2005 was "I thought it was a good time to raise the idea of using fear to stifle political debate." Clooney makes the film like a procedural, where each piece is locked into place to build a case for the positions the characters take, and in doing so building tension around the outcome. The film is shown in black and white, shot by Paul Thomas Anderson's regular cinematographer Robert Elswit, and Clooney was therefore able to use a lot of actual footage of McCarthy himself without jarring the viewer out of the period mood, which gives a verisimilitude to the finished product.

Clooney bookends the film with Murrow's speech to an award dinner in 1958 where he reflects on the current state of media and his hope for the future. Murrow (David Strathairn) then speaks to events of 5 years prior and Clooney shows them via an extended flashback. Murrow is made aware of the military persecution of a soldier, forced out of the service because his family has subscribed to a magazine in Serbia, their homeland, and the accompanying communist smear enough to send him packing. Murrow runs a piece about the unfairness of the procedure as no evidence was shown as to guilt, no witnesses called, no due process of law. Pressure is brought to bear on Murrow and his producer Fred Friendly (George Clooney) as sponsors of the show threaten to pull out, but their boss Paley (Frank Langella) backs the pair, but allows them to pay a $3k shortfall in advertising personally. A CBS colleague is caught in the crossfire and asks Murrow to take on the Hearst press as well. Eventually McCarthy himself becomes the subject of a Senate investigation.

Clooney neatly encapsulates the issue as one of due legal process, even though Murrow says at one point "there are not two equal and logical sides on every argument". and for McCarthy claimed there were over 200 communists who had infiltrated the government  and continued to bring accusations without evidence, a throw back to the Salem witch trials of the 1600's. Murrow affirms the law of the land, if there is evidence and guilt let the courts see and assess the information, as guilt by association is not enough. An all pervading atmosphere of fear is stalking the land and soon everyone in the media is looking over their shoulders, as HUAC is also part of the climate of intimidation, which is the senate committee looking into Hollywood and the media. The blacklist extended to television as well, and CBS like the other networks are 'cleaning house'.

McCarthy flourished because good men stayed silent for fear of being smeared as being pro-communist, including the then president Eisenhower and future president John Kennedy who's right wing father Joe was a rabid anti-communist catholic and a friend and supporter of McCarthy's. Robert Kennedy served as an assistant counsel for McCarthy, who was godfather to one of his daughters, until he couldn't stomach the tactics and left, he's seen momentarily in the archive footage in the corner and looking sheepish. Murrow's op-ed piece at the end of the episode of See It Now is a masterclass in serious journalism, that editorialises but doesn't cross lines of bias as is common now on 'news' channels like Fox News. It's worth re-visiting in full,

"His primary achievement has been in confusing the public mind, as between the internal and the external threats of Communism. We must not confuse dissent with disloyalty. We must remember always that accusation is not proof and that conviction depends upon evidence and due process of law. We will not walk in fear, one of another. We will not be driven by fear into an age of unreason, if we dig deep in our history and our doctrine, and remember that we are not descended from fearful men ... We proclaim ourselves, as indeed we are, the defenders of freedom, wherever it continues to exist in the world, but we cannot defend freedom abroad by deserting it at home. The actions of the junior Senator from Wisconsin have caused alarm and dismay amongst our allies abroad, and given considerable comfort to our enemies. And whose fault is that? Not really his. He didn't create this situation of fear; he merely exploited it—and rather successfully"

McCarthy's influence declined rapidly when men of substance like Murrow spoke up against him, and he was eventually denounced on the floor of Congress and died in disgrace in 1957. Clooney uses Murrow's award acceptance speech to highlight just what an opportunity was missed in using Television's potential for education instead of mindless escapism. In light of subsequent events a case could be mounted that television usurped religion as the 'opium of the masses', and the fact that Karl marx first made the observation only makes it more apt. Hopefully there is light at the end of the tunnel, pay TV has opened up the possibilities of content in ways that were unimaginable in the 'golden' age of live TV. There is now substantial and brilliant TV being produced, as well as thoughtful and educational content, the trick now is to get the viewer to change over from the bread and circus variety still favoured by the mainstream. 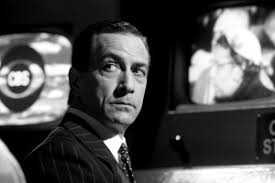