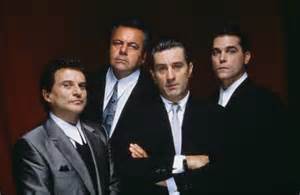 "This American system of ours, call it Americanism, call it capitalism, call it what you will, gives each and every one of us a great opportunity if we only seize it with both hands and make the most of it."  ~ Al Capone

Martin Scorsese spent the decade following his masterpiece, Raging Bull, exploring a variety of cinematic forms, from the satirical joys of After Hours  and King of Comedy,  the mainstream fizz of The Colour of Money  to the deeply personal essay on faith, The Last Temptation of Christ.  In 1990 he re-teamed his Raging Bull  collaborators Robert De Niro and Joe Pesci and again explored a macho culture, this time the world of the Mafia wise-guy, Goodfellas.  The film was based on the true life story of Henry Hill, a member of the Luchesse crime family, via the 1886 book, Wise Guy,  by Nicholas Pileggi. Scorsese cast Ray Liotta in the pivotal role as Hill, co-wrote the script with Pileggi and revisited the gangster world he’d memorably essayed in his early masterpiece Mean Streets.

Henry Hill (Ray Liotta) is a half Irish, half-Italian boy, growing up in the working class areas of Brooklyn and envious of the ‘respect’ he sees afforded to the local mob figures. He falls in with the Luchesse family, run by local Capo, Paulie (Paul Sorvino) and befriends two of his crew in the suave and cool Jimmy (Robert De Niro) and the pugnacious socio-path Tommy (Joe Pesci). Henry graduates from errand boy to fully fledged mobster and executes several robberies with Jimmy and Tommy, setting himself and his family up in the process. Henry seems to have everything, his pretty wife Karen (Lorraine Bracco), kids, money and security, until fate takes a turn and his life spirals out of control.

In 1972 Francis Ford Coppola took on Mario Puzo’s, The Godfather,  and created an operatic level template that changed forever the scope of ‘gangster’ films, but Scorsese takes another tack and goes back even further to evoke the earthiness of the Warner Brothers gangster cycle of the 1930’s. Scorsese was not unaware of the hard-nosed world in which Henry and his friends moved, and of the ways they operated, having grown up in New York’s Little Italy. Scorsese not only took the decision to show the brutality in gut churning detail, but paradoxically he decided to also show the fun they had. It’s this puzzling dichotomy that fascinates Scorsese, the ability of the wise-guy’s to lead a ‘normal’ life, where loving your family is the most important thing, and yet to carry out acts of casual brutality when needed, “hits never bothered Jimmy, it was business”,  Henry says. It’s this ability to compartmentalise, to rationalise the irrational, to cling to self-delusion that lies at the heart of the story.

Henry’s first statement is “As far back as I could remember I always wanted to be a gangster”,  setting the tone for what is to come. Henry lives the life of a teen in arrested development, never needing to mature enough to address adult concerns; if and when they arise he merely attempts to side step them. Henry lives an indulged and hedonistic life, but it comes at a cost. One of the costs is to never know when a ‘friend’ might become an enemy, and with psychotic friends like Tommy it makes continued association a fraught concept. Henry comes to realise he is trapped in solipsistic nightmare, the catch being that once inside the mob there is only one way out. Scorsese keeps this ‘hanging’ tension in play for much of the second half of the film, enlivening proceedings with a fatalistic patina, a ghostly presence where we are made to feel that there will be a reckoning for Tommy’s actions, one that will inevitably touch Henry in the fallout.

Martin Scorsese had already proved himself the master of extracting prime performances from individual actors, but here he helms a superb ensemble cast where several roles are crucial to the success of the whole. Robert De Niro is solid and subtle as the oily, if charming Jimmy, and Liotta is very fine as the boyish Henry, centring the piece as an almost sane presence, drawing us in a lulling fashion, only to serve to make us regret our complicity in falling for his charms. Lorraine Bracco brings a sweet energy to the role of the woman who does fall for Henry, a marginalised presence in a male dominated world. Scorsese is at pains to point out that this is a world that relies on acceptance of the pecking order, one in which your place in the hierarchy should be understood in order for balance and order to be maintained. And whatever you do, don’t break the code.

For the brilliance of the acting ensemble, the above mentioned and the effortless verisimilitude afforded the work by Sorvino, Frank Vincent, Anthony Powers and Michael Imperioli et al, the acting honours go to Joe Pesci in a first round knockout. In one of the greatest exchanges in modern cinema Pesci puts everyone off their drinks by challenging Henry’s offhand bar room comment, “You’re a funny guy”.  Pesci moves from convivial raconteur to psycho combatant in a seamless and blood curdling to and fro, his “How am I funny?”  has a stunning intensity and presages bad things to come.  Scorsese said Pesci would only do the film on the condition that this scene, which was based on something Pesci himself had witnessed, would be included. Pesci largely improvised the scene, with Scorsese directing the different phases of intensity as he worked himself up. It’s unforgettable and as famous as De Niro’s immortal “You talkin’ to me?”  line from Taxi Driver, and rightly so.

Martin Scorsese revisited the gangster world again for a kind of follow up with Casino in 1995, (again with De Niro and Pesci and via a co-written script with Pileggi) a film full of colour and interest, but harder and more cynical than Goodfellas.  These decidedly Hawksian, macho environments again formed the backdrop for other latter epics of Scorsese’s, with The Departed, a notable entry from the POV of the other side of the law and The Wolf of Wall Street, with bankers replacing gangsters and yet appearing as far less sympathetic and likeable people. It really says something about the rapacious denizens of Wall Street that we prefer to shower some empathy upon thieves and murderers in preference to them n’est-ce pas?

Part of the reason for the enduring appeal of Goodfellas  is the likeability of these people, who do very un-likeable acts. Scorsese has empathy for the culture and the types, no matter how flawed or conflicted they may be, and that warmth informs our understanding of their complex world. Martin Scorsese has proved himself, time and again, to be the quintessential essayist of modern American urban life, and of many of its rituals and foibles. He is as essential as John Ford in finding the ritualistic strands that connect and define the modern human experience, in the end it comes down to family and love. With Goodfellas,  Martin Scorsese put the ‘ordinary Joe’ front and centre, albeit in extraordinary circumstances and managed to square that circle brilliantly. He also understands that for some the only way to claim a slice of the American dream is through fear, blood and bullets. It remains a highpoint of American cinema and a classic of its kind. 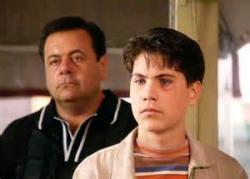 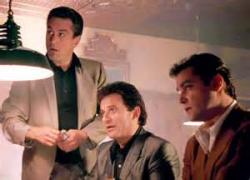 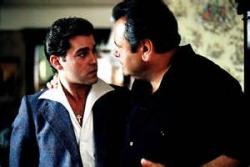 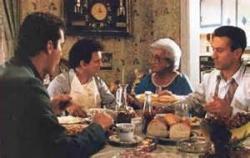 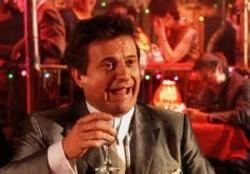 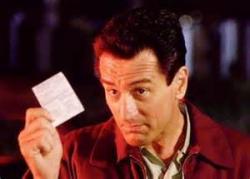