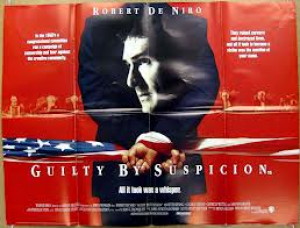 Irwin Winkler's 'Guilty By Suspicion' may not be a great film but it's a very important one. The Hollywood Blacklist remains a singular stain upon the history of the creative arts in America and has barely been addressed by the industry in the 60 years since it's heyday. Martin Ritt's 'The Front', in the mid '70's took a serio-comic look at the issue (with Woody Allen playing the lead how could it not?) but apart from that motion pictures have largely steered clear. This film is at least an attempt to redress the balance, but incredibly mainstream American filmmakers would take another 14 years before George Clooney addressed McCarthy himself with his excellent 2005 feature, 'Good Night and Good Luck'. Clearly, the topic remains keenly felt within the artistic community, as evidenced by the Academy Award ceremony for Elia Kazan's lifetime award in 1999, where member's opinions divided as to giving him an ovation. The film focuses on a director not unlike Kazan, who is facing the same situation, to name names and work, or refuse and face the possibility of gaol.

Hollywood figure Larry Nolan (Chris Cooper) is facing a grilling from HUAC investigators, and is pressured to 'name names', "don't make me crawl through the mud" he pleads. His friend David Merrill (Robert De Niro) is a successful director and he returns home from Europe to find he's been named as a communist to the committee. Daryl F. Zanuck (Ben Piazza) asks him to "clear this up" before he can take charge of a promised picture, and David sees a lawyer Zanuck recommends. David's estranged wife Ruth (Annette Bening) is sympathetic to his plight and his struggle with it makes them closer. Larry's wife Dorothy (Patricia Wettig) breaks down under the pressure of what it's doing to their family and Ruth and David try to help her. David's friend Bunny (George Wendt) is a famous writer who has been named as well, but he suspects David has named him and accuses him of it. David refuses to cooperate and work dries up for him, forcing him to reconsider when he appears before the committee in public hearing.

Winkler uses several historical names to fatten out the verisimilitude of the piece, mentioning in Merrill's HUAC grilling names like Lionel Stander, Sterling Holloway and Howard Da Silva, all actors who ended up on the blacklist. The relationship between Merrill and Bunny resembles that of Kazan and writer Arthur Miller, even though the results play out differently. What is plain is the damage the blacklist did to people and to families, and to the divisive nature of working in an environment of betrayal. Old friends suddenly looked sideways at each other and livelihoods were lost. Martin Scorsese contributes a cameo as a director obviously modelled on either Joe Losey or Jules Dassin, both of whom ended up exiled in London. Zanuck is portrayed sympathetically, he did after all warn Dassin he was blacklisted and managed to get him to finish his last Fox film, 'Night and the City', and he was a liberal who had to live with the blacklist to stave off the money men. He was in a more powerful position even though his boss had signed up to the infamous Waldorf Statement, where all the major motion picture companies agreed not to hire the so-called Hollywood Ten or anyone who would not declare they were not a communist.

Winkler has Merrill try his luck on Broadway, in actuality not as heavily affected by the blacklist because it had a much more fragmented ownership structure than the heavily corporative Hollywood studios. A major criticism of Kazan was at least he could have found work on Broadway and therefore should not have buckled. This doesn't take in to account the fact that it's up to the individual what work he pursues in a free society, not what his 'friends' think he should do. Merrill takes work on a cheap western, obviously modelled on 'High Noon', as the writer of that movie, Carl Foreman was blacklisted, and even went on to win an Academy Award for 'Bridge On The River Kwai' under a pseudonym. Merrill's testimony to the committee is typical of the time, confessing to a small involvement in a legal gathering when the arts community thought communism as a philosophy had something to offer the troubled times of the Great Depression. HUAC even used the fact that people worked on Hollywood 'propaganda' films showing the USSR in a favourable light during the war as a weapon against them, despite the studios having been asked directly by President Roosevelt to produce them! Strange days indeed.

HUAC used Hollywood for it's own ends, inflating a non existent conspiracy into a 'crisis' it could then exploit, and thereby greatly added to the cold war climate. Competing philosophies need to play out in the court of public opinion, not for the benefit of any government arm willing to cause fear and dread and to exploit it to bolster their own power. Communism and/or socialism were competing ideas in a world looking for solutions not provided by older models, nothing more. Winkler mentions the Rosenbergs, tried and executed as convicted spies, with Ethyl's guilt far from certain, but such was the climate of the time that due process was compromised. Hollywood meant press, press meant fame and fame meant power, a dangerous confluence.

There is a brilliant feature film to be made about the scandal of the HUAC investigations into Hollywood, but this isn't it. That film should centre on the cowardly capitulation by the major studios, who saw an opportunity to regain some of their own power that was lost after the war due to the rise of independent producers. The majors were also worried about the anti-trust laws that saw places like Paramount have to split up their assets. They leveraged the blacklist to take back the reigns of power and used the fear of it to control their workforce. Hopefully that film will avoid the scapegoating of men like Kazan and Dmytryk, which would be akin to blaming the torture victim and not the torturer, as they were men who clearly buckled under the disgraceful pressure of an arm of their own government to continue to work in their chosen fields. Hopefully it won't overly lionise those that were able to stand firm, like Miller, or re-build in a foreign country like Dassin and Losey, the truth is far too nuanced and subtle for that and lies, as always, somewhere in between.

There is a brilliant feature film to be made. Still waiting. 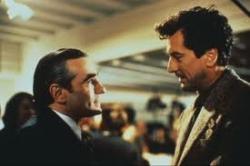 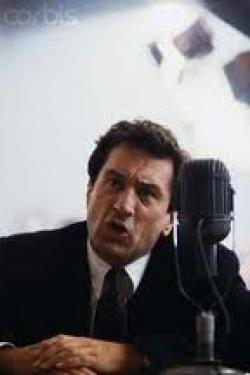 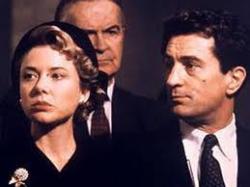 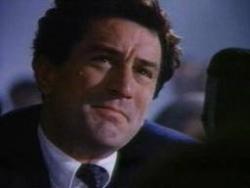 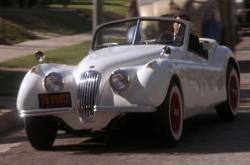