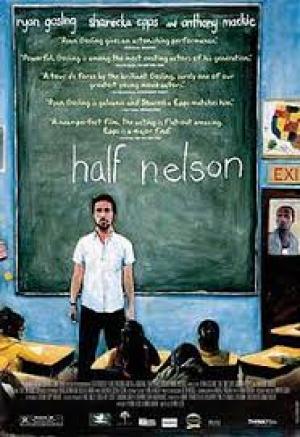 "If the character is true, the movie will fall into place. Or at least that's what you hope."
~ Ryan Gosling

Hollywood loves a fireworks display, emotionally speaking, rewarding performances that overtly ‘emote’ with Oscar wins and nods, so it’s refreshing when they recognise a performance of stillness and quietude as with Ryan Gosling’s eye-catching characterisation of a drug addicted teacher in the very fine Half Nelson. Ryan Fleck directed the piece, and in tandem with his creative partner and future life partner Anne Boden, he navigated Gosling through what would be a breakthrough role, establishing the young Canadian as the actor-most-likely, something Gosling has more than fulfilled in the interim. The film is a stark turn from The Notebook of 3 years earlier, a Hollywood blockbuster chick-flick that put Gosling’s name before the public in a big way, albeit in a role that was the polar opposite of Dan Dunne in Half Nelson.

Dan, an inner-city high school teacher, is a charismatic classroom presence, engaging and unconventional as he tries to get his class interested in history. He finds the curriculum stultifying but is dedicated to find a way to connect with his mostly African-American, lower socio-economic high school kids. He also coaches their basketball team and after a game, Drey (Shareeka Epps), one of his brighter students, finds him out of it in a locker room, a crack pipe in his hand. The two misfits’ bond over Dan’s secret and soon Drey is dragged into the drug culture of her neighbourhood via her brother’s drug dealer boss Frank (Anthony Mackie). Drey’s working mother is mostly absent, her brother in prison, so she turns to Dan for help, and Dan confronts Frank about his connection to Drey.

Fleck and Boden developed the script over several years, honing it into a sentiment free slice of life, where proximity and chance determine everything. Dan is an outsider in every area at the school, at once part of the establishment ‘machine’ that has determined the destiny for most if not all of his class, but also a non-conformist misfit amongst the ‘ruling’ class he works for. The tension between the two, combined with Dan’s personal demons, (hinted at in an awkward scene with his family) sees the young teacher seeking escape in a cocaine or crack induced haze. Dan experiences further emotional push and pull as he balances his want to help the kids, with his want to cover the emotional scars left by an ex-girlfriend who reappears unexpectedly. Dan’s struggle is to invest emotionally in one area of his life and not in another and this dilemma a circle that can’t be squared. Gosling brings an almost Bressonian stillness to the role, a study in minimalism, something he would return too several times over the next decade, particularly in his films with Nicholas Winding Rehn, Drive and Only God Forgives.

Drey also seeks connection, and hers is a heartbreaking struggle against the crap-shoot bad luck of her lot in life. Whereas Dan was born to middle-class privilege, Drey has working poor suffering to look forward to. Her mother works an ambulance job that keeps her away from home, her father is not seen and her brother is in prison when the local drug dealer seeks to exploit her and employ her as a carrier. Shareeka Epps is stunning as the 13-year old Drey, who brings an equally quiet intensity to her character to match Gosling. Drey is a child of neglect because of a system that forces her mother into long hours, and though the fate of her father is not discussed, it’s enough to see the havoc wreaked upon the black community by lack of access to jobs and the wider economy.

Fleck and Boden underpin their sharp screenplay with the idea that ‘one thing does not make a man’, as Dan tells Drey. He’s saying he’s more than just a drug addict, and his teaching technique reflects his idea, based upon Dialectics (a leftist-leaning philosophy much admired by communists Marx and Engels) a notion that posits opposing forces in nature operate on one another until a new state is revealed. Dan’s internal dynamic is reflected in this ideology, where he seeks emotional escape but Drey represents an opposing force bringing about his new state. For Drey too, Dan is the ‘opposite’, a force that makes her question the accepted norms her life throws up. Dan represents a path where human connection, however compromised, is possible and if two elements collide then change will occur. In class, Dan brings up the Civil Rights struggle in post-war America as his example of opposing forces bringing change and we see the drama played out in the personal microcosm of the collision between their two realities, where the commonalities of isolation and loneliness speak to a shared humanity.

Former child actor Gosling would make a couple more films before taking a three-year hiatus from film making, then after his return in the stunning Blue Valentine he would go on to mega-stardom. Fleck, in turn, would turn out a couple of low-level films before the Hollywood mainstream would tap both him and Boden to helm Captain Marvel in 2019. All should be justifiably proud of the marvellous, understated work they produced with Half Nelson, one of the strongest pieces of cinema of the period. 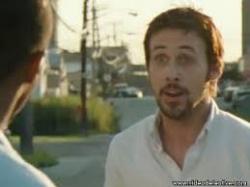 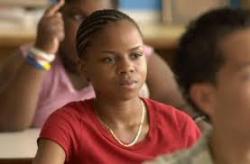