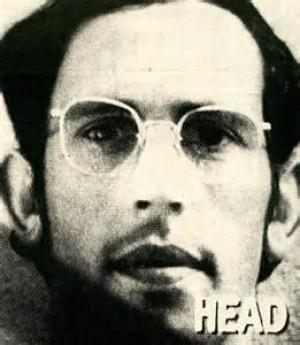 Bob Rafelson came to his debut feature thinking he might never make another movie and therefore he chose to throw everything he could into the production of the madcap Monkee vehicle Head,  with mixed and fascinating results. After two years of the silly and manic TV series, chock full of first class pop music and Marx Brothers type mirth making, the producers convinced the ‘Pre-fab four’ to take their limited talents to the silver screen and enlisted B-movie hipster Jack Nicholson to write the screenplay. Rafelson and Nicholson consumed heroic amounts of weed, and concocted a series of absurd non-sequiturs par excellence to film, the script also enhanced by Jack’s heavy use of LSD, according to Rafelson.

At this point in my regular musings I would normally offer a decent synopsis, but any outlining of a plot in this case would be futile and irrelevant. The movie opens with a psychedelic blast of Porpoise Song (Theme from Head),  a sublime slice of Goffin and King written pop that hints at Gerry Goffin’s immersion in the mid sixties LSD culture that would eventually cause him some Brian Wilson-esque damage.  Goffin produced the song himself, heavily influenced by The Beatles’ psychedelic period but showed he’d been paying close attention by creating his own psych masterwork. Rafelson wanted to parody the band’s manufactured image in a post-modernist collage of swirling sound and images.

Bob Rafelson had already used the Goffin and King’s songs during the series, and hand picked them to write the pivotal theme song for the movie, later saying   "Carole King was living in an apartment building on Sunset Boulevard, and I went to her apartment every day, and we would sit and we would talk. That song was critical to me. 'A face, a voice, an overdub has no choice.' In other words, the whole synthetic process of making The Monkees' records was about to be examined in the movie. They are constantly being picked up, used, transplanted, subjected to influence by the guru, by the war, by the media, and all of these things are exposed. They are always portrayed as the victims of their own fame. That's what I chose to make the movie about.... It was Carole or Gerry's idea to record live porpoise sounds and use them on the track. That's what you hear…. I just thought that they were the appropriate people. It is far and away my favourite Monkees' song."

The early scenes also have the band sing of their own lightweight reputation, a combination of having been pilloried as sell-out’s when it was discovered they did not play on their early hits, “the money’s in, we’re made of tin”  and their irrelevance in face of ‘youth’ issues like Vietnam “a manufactured image with no philosophies.”  The ‘narrative’ continues with a skit on war, enlivened by some slapstick with a football player, underscored by a dark sense of humour not found in the TV series. A rift between the band and the producers occurred when the band insisted on playing and writing their own material, and astonishingly perhaps they managed to come up with some fine songs off their own bat. As a dig at their critics the band presents a live concert version here of Mike Nesmith’s gritty Circle Sky,  which reveals them to be a very respectable garage band indeed.

Head  operates as a non-linear, non narrative excuse to try out any and all ideas that may have occurred to writer and director during their drug fuelled creative musings. Rafelson took equal parts inspiration from the cinema du shock  of Jean-Luc Godard, especially his colour drenched, post modernist blast Pierre Le Fou,  and the angular pop-art attack of Andy Warhol and Jasper Johns. Rafelson presents a Fellini-esque array of characters, including cameos from Stanley Kubrick favourite and oddball Timothy Carey, as well as a head scratching turn from old Hollywood icon Victor Mature (or Victor Manure as my paternal grand-mother used to say who couldn’t stand him) and from sixties iconoclast Frank Zappa! Zappa even gets in a tres droll  line about Nilsson’s Daddy’s Song,  “that song was pretty white”  before walking off with a cow.

The film can be read as an extended visual approximation of an LSD trip, and the drug culture references are redolent throughout. This is no surprise when you consider the advertisement that ran in the Los Angeles trade papers for actors and musicians to audition contained the ‘coded’ line, “must come down for interview.”  Rafelson admitted this was intentional so as to attract the right kind of ‘heads’, jargon for drug users at the time. The film pillories commercialism, showbiz fakery (a western scene is ruined when Dolenz gets pissed off, cuts the painted backdrop and storms off set) militarism and religion as it reaches for a darkness not available in prime time TV, status symbol land. The jaunty opening Monkee’s TV theme parody includes the most famous ‘head’ shot of the time, the vicious execution of a Vietcong saboteur by a South Vietnamese General, a chilling bullet to the temple. As if that didn’t indicate to TV fans that they were not in Kansas any more Davey Jones delivers a showbiz rendition of Harry Nilsson’s bleak summation of a child’s pain in Daddy’s Song.

It is this disturbing dichotomy which separates the Monkee movie from their TV work, and it stands as a cultural marker of their attachment to the counterculture, rather than their allegiance to the institutional machine that created the phenomena. It also looks like a goodbye to the past, severing any possibility of a return to the lightweight format of the series for the actor/musicians. The blends of the four personality’s works well in this fractured format, giving a continuity and flow where otherwise there is none and still allowing the differences of each to shine and to inform the proceedings with charm and style.

The attempt to be taken seriously by the four Monkees might not have been an unqualified success but it aligned nicely with Rafelson’s feel for the zeitgeist and his own ambition in cinema, and the somewhat fraught pairing managed to create an un-sung American gem in the process. It exists like a Jackson Pollock explosion, absurdly and outrageously shocking at one level and naïve at another, with Annette Funicello and Frank Zappa equals and opposites, where even the promotional poster (of the anonymous advertising exec’s head shot) was more a manifesto than an advertisement. Head  is a startling potpourri of mad sixties, post-modernistic anarchic art, sitting in a small moment between the demise of the old studio system and the rise of the American Renaissance, spearheaded by Rafelson, Nicholson and Hopper et al. It is also a tribute to the talent of four absolute professionals who were unfairly spat out by the entertainment behemoth, only to turn around and deliver this single digit salute in its direction. 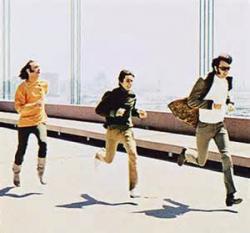 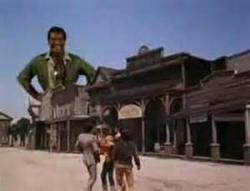 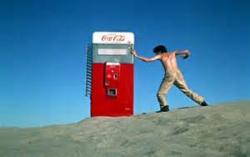 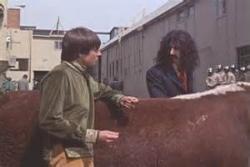