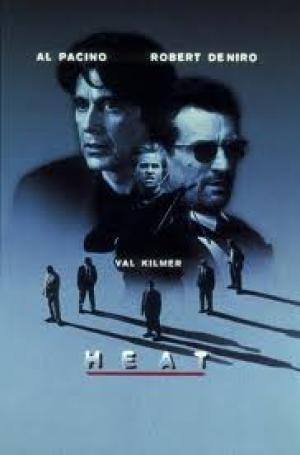 "A samurai should always be prepared for death - whether his own or someone else's."
~ Stan Sakai

Michael Mann burst out of the TV industry of the 1980's to invigorate American cinema with his clear eyed and visceral filmmaking, and with Heat  in 1995 all the components of his vision coalesced around a dream superstar pairing of Robert De Niro and Al Pacino. Mann wrote an update of an older made for TV movie he'd made called L. A Takedown,  and made a truly epic scale crime film that dares to take it's time with character development instead of being just a series of linking action sequences. Mann cast the smaller roles with capable and gifted actors, and shot the film with an elegant and formal look and quality with Italian cinematographer Dante Spinotti, who had helmed Mann's excellent 1992 epic The Last of The Mohicans.

Neil McCauley (Robert De Niro) is a confident and efficient operator, he steals an Ambulance from a hospital and meets up with Chris (Val Kilmer) and they take their position for a heist Neil has planned. Michael (Tom Sizemore) picks up new gang member Waingro (Kevin Cage) and the robbery goes down. Waingro is a sadist and breaks the rules, convincing Neil to get rid of him, but he slips away before he's disposed of. Vincent Hanna (Al Pacino) investigates the murder/robbery and figures he's up against a pro. Neil is a well dressed and cool criminal, he fences the money, making an enemy of it's money laundering owner, and then falls for a book clerk called Eady after she talks to him in a diner. Vincent struggles with his work and home-life balance and the strains on his third marriage start to become apparent as he continues to devote his time to tracking down the gang. Vincent and Neil get into a cat and mouse game, each one aware of the other's presence and ability, and eventually they meet over a coffee, recognising the thin line that separates them, and their equal commitment to their chosen work.

Mann takes his time at every level of establishing the human dimensions of the people on both sides of the law. A family and group dinner with the criminals sees them watched by the same law officers we later find celebrating an occasion together with their families. Vincent struggles with his relationship with his step daughter (Natalie Portman) and eventually he alienates his wife so much he finds her in the arms of another man. Neil knows that Eady represents a future he can now dare to hope for, and he makes plans to leave with her for New Zealand after one last big bank heist. Chris' relationship with his wife (Ashley Judd) is problematic and Neil intercedes like some Godfather figure at one point to help smooth over the issues. Both groups continue to pursue their own ends, backing their own ability to ultimately triumph against the other, "For me the action is the juice ",  says Michael when Neil offers him the chance to back out of the final heist. "I don't know how to do anything else",  Neil tells Vincent at their meeting, echoing their tragedy is Neil's reply,  "Neither do I."

The set piece conversation between the two stars is a master class in nuance and depth, as both circle around each other and give grudging though real respect that pays off in the final scene. "My life's a disaster zone"  says Vincent, in a moment of raw self awareness, ironically opening up to Neil in a way that's denied him to his wife because of his macho facade. Neil as an equal can be made privy to the dark areas of Vincent's life because Vincent instinctively knows Neil suffers these complications too. Neil tells Vincent his own personal mantra, that you need to be able to walk away from everything you love in thirty seconds if required, and that a "regular type life"  is not for either of them. The pair leave with an understanding, "I do what I do best".  Mann sets up the protagonists as mythic warriors, echoing the lone wolf ethos of men on the edge, isolated from 'decent' society, in a very Hawksian universe where being 'good' is the key, of being capable to perform when the heat is on. Mann also taps into the legend of the outlaw west, where the only satisfactory climax is a one to one shootout, Vincent is Pat Garrett and Neil is Billy The Kid.

Mann creates a paradox, a languid action film, and imbues it with a Kubrick like precision and crispness. Mann can capture a semi-trailer ramming an armoured car into a row of new cars and then spend 10 seconds on the slow fall of the bunting around the sales yard, it's this contrast that balances the spectacular with the mundane. Mann allows his audience to find meaning and substance in the everyday, not to be swept away purely by muscularity and pace, but to dwell on the smaller moments of humanity that resonate, and that makes the film more satisfying as a result. The star performances elevate it to a quasi-operatic level of intensity, but without artifice or bombast. Both Pacino and De Niro rise to the occasion superbly and remind us of how uneven the later era films they have chosen have actually been in comparison. The support cast is uniformly excellent, Kilmer has never been better used, and Jon Voight injects the right amount of world weary fatalism and weight to his role.

Michael Mann went on to his most successful commercial period after Heat  became both a public and critical hit, generally building his films around a central, strong isolated male character, who has a significant relationship with either his bete noir, or his nemesis, always aware that the line that divides is an arbitrary one at best. Heat  is one of his best films, and superior large scale movie making. 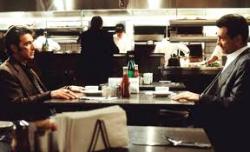 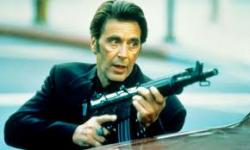 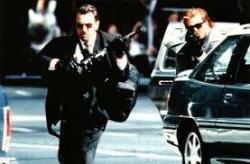