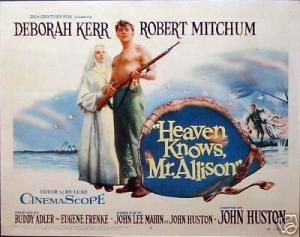 What could easily have descended to the level of  bar room joke is instead a charming and thoughtful fable about how men and women relate to each other while speaking almost separate languages and about the distance between them even as they gaze into each other’s eyes. John Huston directed his own adaptation of the Charles Shaw novel of the same name and filmed on location in Tobago, standing in for a disputed Pacific island during WWII. As part of a 2 picture deal with Fox, the second film being the egregious and forgettable The Barbarian and the Geisha, which Huston claimed was ruined by his star, John Wayne, in re-shooting and editing after Huston’s filming was completed.

The scenario is simple and uncomplicated, as is the cinematic approach and results, as a US marine is washed up onto a seemingly deserted island in the Pacific, where he soon encounters a young, stranded nun. The Marine is Mr Allison (Robert Mitchum) and the nun is Sister Angela (Deborah Kerr), Kerr donning the habit some 10 years after she’d made a triumph as Sister Clodagh for Michael Powell in a Himalayan monastery in the superb Black Narcissus. Sister Angela stayed on after evacuation to tend for an ill priest, who has since expired. The two inhabitants dance around their predicament, until a detachment of Japanese invade and force the couple into hiding. The enemy causes the two to bond in ways that are unforeseen, once escape is no longer an option survival becomes the dominant idea.  The occupation by the Japanese causes it’s own challenges as does the unspoken barrier of the habit. Allison battles external forces in the military aggressors and internal forces as his own feelings are unlocked as he gets to know and understand the shy and dedicated nun. At one level the piece is an ‘Adam and Eve’ exploration, but one where the protagonists have significant baggage to bring to the garden. The allusion is completed by the tune Allison sings to her, ’Don’t sit under the apple tree’. Cute n’est par?

Huston never lets the scenario tip into melodrama, the tone of the piece is always respectful and believable because of the superb playing by both his leads. Mitchum completely inhabits the role of the battle hardened Marine, the only home and family he’s ever known as he grew up a recalcitrant orphan. The Marine’s gave him discipline and sorted him out, a rock solid control that keeps us believing the Sister’s honour is in no danger from this ‘Yes Ma’am’ soldier. ‘I got the corps like you got the church’ he tells her. Equally Sister Angela is led to question her unshakeable faith as she sees great dignity and strength in the conflicted Marine, who eventually begs her not to take her final vows. The throwing together of the pair leads to two entirely different worlds colliding and the end result is never certain. There are several touching moments when both feel the loss of the other after various events, and finally an emotionally closed off man is forced to confront his feelings for a woman that convention has dictated he cannot have. The religious angle is never overplayed, merely added to the mix of the things that create barriers between the two, primarily the cultural difference between an educated and bright Irish convent girl and a graduate of the Brooklyn school of hard knocks.

The actors manage to handle a difficult balancing act, between legitimate attraction and cultural taboo but once Allison discovers a store of Sake wine and he drinks himself rotten and some truths emerge. In Vino Veritas leads to Allison’s crie de couer, ‘a pipe’s no good without tobacco’, as he symbolically smashes the old priests pipe that was gifted to him by the nun. It’s a nicely metaphorical way of saying that a man and a woman need each other to be complete. The film was shot gloriously and ingeniously by Oswald Morris, a Brit cinematographer who had film Huston’s colourful Moulin Rouge and offbeat Bogart piece Beat The Devil and who went on to a fantastic career and an Oscar for Fiddler On The Roof. Huston himself thought the film one of the best things he’d done, and Kerr was duly nominated for her acting, and Mitchum’s was so deceptively effortless it went sadly unacknowledged by the award givers.  Huston said the production was an exceedingly happy one,  except for an explosives stunt that almost went horribly wrong. Huston provided another star two handed property, like his The African Queen, which again showed off two great movie stars to advantage, that they could act so well was the cherry on top that made Heaven Knows Mr Allison such a wonderful entertainment. 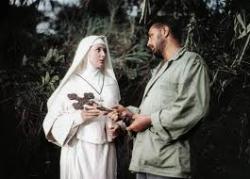 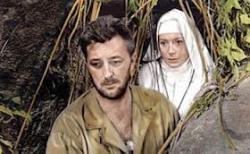 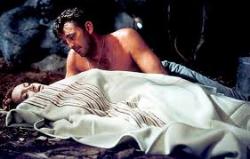 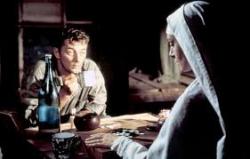