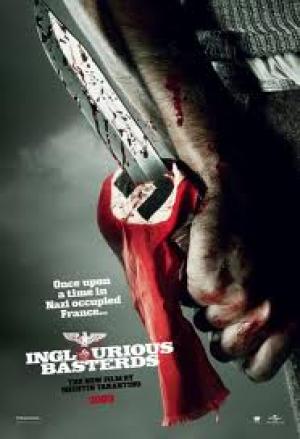 "I loved history because, to me. history was, like.... watching a movie, I'm a historian in my own mind" - Quentin Tarantino

Quentin Tarantino’s satirical alternate history, genre-of-one, WWII movie was a long time coming, morphing over 10 years from a ‘Dirty Dozen’ type mission film to a Jewish revenge fantasy of the kind only a post-modernist savant could make. Tarantino adopted a twin pronged narrative that converges at the end, allowing him to explore his love of explicit gore as well as his love of cinema. Brad Pitt finally found a role which he could work on for Tarantino, a long held ambition, but the role of Landa, originally intended for Leonardo DiCaprio, was instead given to Christoph Waltz, a more appropriate choice. Tarantino said the choice of Waltz “gave me my movie”,  and it’s not overstating the case, it also opened the way for Waltz’s star turn in Django Unchained.

In occupied France the Nazi ‘Jew hunter’ Landa (Christoph Waltz), an intelligence officer in the SS, visits a small rural farmhouse and interrogates the owner. A young Jewish girl, Shosanna (Mélanie Laurent) eludes his grasp; he watches her run over the hill and mysteriously lets her flee. She finds shelter and takes a new identity as Emmanuelle, a cinema owner in Paris, but this leads to unexpected interest from a Nazi soldier (Daniel Brühl), a film buff who also happens to be a war hero.  Lt Aldo Raine (Brad Pitt) part Jewish, part Apache Indian, forms a secret guerrilla unit in the US Army, commissioned to operate outside the ‘rules of engagement’, and to wreak terror in the heart of the German soldier by their bloody and uncompromising exploits. Two separate plots converge in a cinema in Paris where many top Nazi’s are set to attend the screening of the latest Goebbels propaganda.

Tarantino mixes his tonal ‘colours’ with a Jackson Pollock like finesse, opening the film to the strains of a sugary French waltz, cross-fading into a spaghetti western pastiche of Beethoven’s Fur Elise! The title card reads, “Once upon a time in occupied France”  indicating we are in for a fractured fairy tale, and Tarantino does not disappoint, creating a fable that amuses and perturbs in equal measure. The film introduces the outrageous with the same casual flair as the believable, twisting genres and perverting expectations at every turn. Tarantino sets the ground for a standard WWII flick with the stunning interrogation sequence at the opening, where Landa assumes the guise of a benign and officious bureaucrat, and then he proceeds to turn the tone on its head by switching to the ‘fantastical’ Basterds story line.

Brad Pitt takes the show piece role of Raine, no co-incidence that the name sounds like Aldo Ray when spoken in a southern drawl, the tough guy Hollywood actor in the 50’s whose specialty was gritty war films, and another Tarantino movie in-joke. Pitt eats the role with rare relish, adopting the southern accent and cadence of speech to create a witty and mellifluous brogue, “Donny, we got a German here, who wants to die for his country, Oblige him”!  Pitt makes the most of Tarantino’s spiky monologues, whole heartedly explaining his fear of post war Nazi survivors walking around anonymously amongst the general population, and just as concentration camp Jews were given indelible numbers, Raine leaves an indelible mark of his own. The Apache scalping conceit is a narrative device that pushes the black humour to the edge, the convergence of two American ‘outsider’ groups, Jews and Indians, to beat the nastiest villains in Hollywood.

Shosanna’s narrative plays like a serious examination of the occupation, including a reference to the most famous and scandalous ‘resistance’ film, Henri-George Cluzot’s Le Corbeau.  That film created a sensation and was condemned by the French, who missed its resistance subtext, and the Germans, who feared the notoriety would threaten the stream of French informers that provided the backbone of the Nazi’s ability to control the occupied country. The fictional film, Stolz der Nation (Nation's Pride),  that the crack marksman Zoller stars in was typical of the Goebbels commissioned propaganda, the type that had made the German film industry the laughing stock of world cinema in the late ‘30’s. Goebbels appointed Dr Alfred Greven to oversee the film industry in France during the occupation, and Greven imagined himself to be a Louis B. Mayer type magnate, and set about making films with high entertainment values. Tarantino lampoons all this in a scene where Winston Churchill (Rod Taylor) and Hicox (Michael Fassbender), a film critic, debate the merits of the German film industry, before leading a mission to kill the Fuehrer.

Tarantino plunders every conceivable source for inspiration, including the ancient folkloric legend of the ‘Golem’. Donny is the ‘Bear Jew’, a Golem, or monster from the Id to strike terror into the heart of every good Nazi, and this is quintessential Tarantino humour of a very black stripe. Landa’s heart of darkness emerges from beneath his officious, functionary guise, as he tracks down the hidden Jews, a task he’s particularly suited to because he can “Think like a Jew”.  Landa speaks to the squalor and desperation of his quarry, marvelling at the “tremendous feats humans are capable of once they abandon dignity”.  Tarantino is a master at the one-on-one scene, (True Romance )  and Inglourious Basterds  has one of his best, as the opening scene with Landa and the farmer is a master-class in creating tension through stillness and superb dialogue. Another set up, and equally as tense, is the scene at a table in a tavern with Hicox, and a famous German actress, trying to fend off the attentions of drunken German soldiers and a suspicious SS officer.

The film is also informed by the ‘film geek’ nature of Tarantino’s references, a signature part of most of his cinematic output, and although a deep knowledge of eclectic cinema is not necessary, it lends another dimension of enjoyment. In many ways Tarantino is fighting Hollywood screen Nazi’s, not real ones. America’s late entry into WWII, where they sat on their hands for 2 years while the Fascists rolled over Europe, makes it ironic to consider the incredible amount of mileage Hollywood subsequently extracted from the Evil Nazi’s. Waltz is a revelation as Landa, and his strength affirms an old Hitchcock-ian trope, that of the charismatic and capable bad guy, which makes his defeat all the more meaningful. Waltz manages to make his Landa both banal and extraordinary, and the film sparks off that as a result.

Inglourious Basterds  is a post-modernist conceit, a one fingered salute to Fascism and one that was widely condemned by more ‘serious’ critics. It misses the point to compare Raine’s Brigade’s atrocities to the Nazi atrocities against the Jews; the satire merely contextualizes those grotesqueries with the added exaggeration and fantasy of Tarantino’s alternate history. The sight of Jewish soldiers riddling Hitler and Goebbels, à la Bonnie and Clyde,  should raise an ironic smile, not intellectual contempt. Tarantino created a visceral subversion, sharply written, well acted and perfectly framed, a balance of the sublime and the ridiculous in fine, if occasionally discordant, harmony. 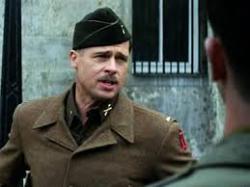 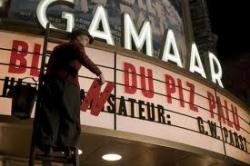 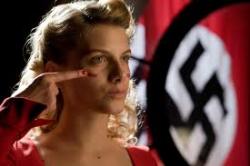 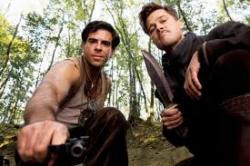 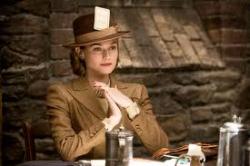 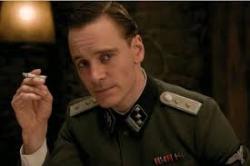 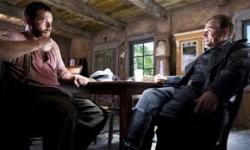